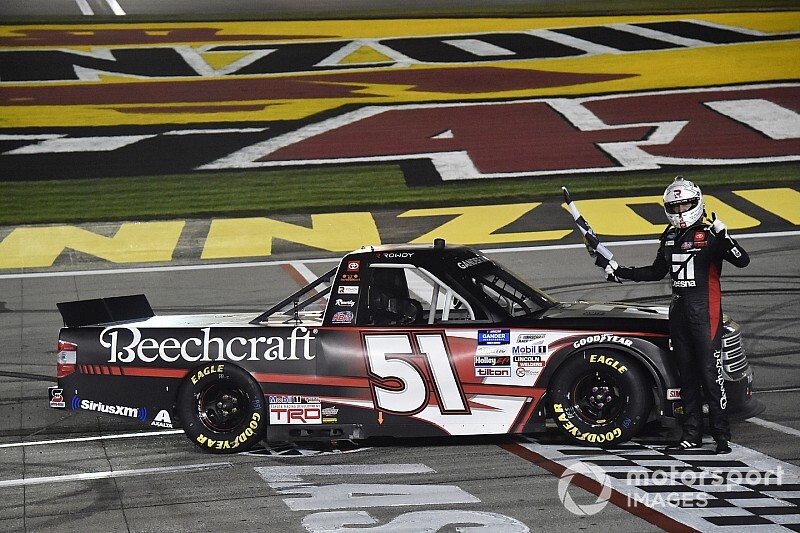 Kyle Busch’s first venture into the NASCAR Truck Series this season had a familiar ending.

Busch wasted no time taking the lead in Friday night’s Strat 200 and dominated the race, leading seven times for 108 of 134 laps on his way to the victory at Las Vegas Motor Speedway.

Busch has now won the last seven Truck races he’s entered dating back to the 2018 season. The win was the 57th of his career.

The win is Busch’s second of the weekend, he also won a Super Late Model race Thursday night at the Bullring. Busch is not entered in Saturday’s Xfinity Series race.

“I don’t know why but we just couldn’t fire off on the restarts. We just didn’t have any speed,” Busch said. “Once we got about 10 laps in, we started to check away from everybody. This Tundra was awesome – it really had great long-run speed.

“It was the first night for Danny Stockman (crew chief) at KBM and it’s cool to have him on board. My guys worked their butts off. We unloaded and we really weren’t that close. We worked on it a lot with this new tire and we got it a lot better.

“We kind of showed that with the (last) long run.”

On Lap 89, Raphael Lessard got loose and eventually hit the wall, collecting Grant Enfinger in the process to bring out the caution.

All of the lead-lap trucks elected to pit with Busch the first off pit road and still in the lead when the race returned to green on Lap 96. He was followed by Sauter and Sheldon Creed.

With 30 to go, Busch continued to lead followed by Sauter and Hill.

With just 10 laps remaining in the race, Busch’s lead had grown to more than 5 seconds over Sauter. Hill was in third

Busch completed a sweep of the first two stages, once again easily holding off his teammate Christian Eckes to claim the Stage 2 victory.

Following the break between Stages 1 and 2, all of the lead-lap trucks elected to pit with Eckes coming off first and taking the lead. On the restart on Lap 38, Eckes was followed by Busch and Hill.

On Lap 45, Busch went to the outside of Eckes to reclaim the lead.

With 10 laps remaining in the stage, Busch had built up a 1.5-second lead over Eckes. Chastain was third, Brett Moffitt fourth and Enfinger fifth.

Busch dominated much of the first stage and easily held off Eckes for the Stage 1 win.

“I feel like the back is just light. Light on weight. Nose heavy, ass up, just light,” Busch described his truck over his team radio.

Sauter, who started on the pole, led the first 11 laps until Busch ran him down and took over the top spot on Lap 12.

With five laps remaining in the stage, Busch’s lead had grown to over three seconds.

Crafton had to start the race from the rear of the field due to unapproved adjustments following qualifying.