Kyle Busch ready for action in the No. 51 ToyotaCare Tundra 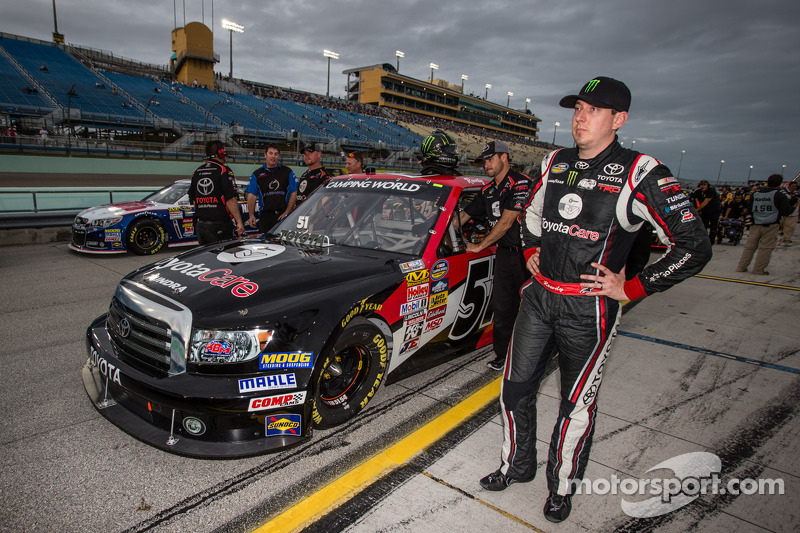 MOORESVILLE, N.C. (Feb. 18, 2014) - Owner-driver Kyle Busch will be behind the wheel of the No. 51 ToyotaCare Tundra Friday night at Daytona (Fla.) International Speedway when the reigning NASCAR Camping World Truck Series Owner's Champions open the 2014 season. 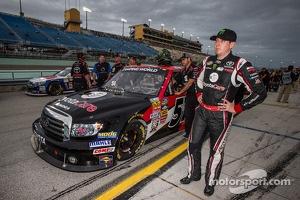 The season opening event will mark the first official event for the revamped Tundra, which was redesigned during the off season to resemble more what fans can purchase in the showroom of their local Toyota dealer. Busch, who has recorded 105 NASCAR National Series victories for Toyota since 2008, will be on a mission to get his first Truck Series win at the "World Center of Racing" and deliver Toyota its first win with the newest generation of trucks.

While Busch is yet to get to victory lane in a Truck Series event at the "World's Center of Racing," the talented wheelman has recorded top-five finishes in four of his five starts in NASCAR's third division, including three runner-up results. Busch was in a position to pick up a win in last year's Truck Series opener, as he was tucked in behind eventual winner Johnny Sauter on the final lap waiting to make his move, when a caution occurred and ended the race prematurely. The Las Vegas native finished second to Todd Bodine in both the 2008 and 2009 events.

The Daytona Truck race is the first of a 10-race Truck Series schedule for Busch in 2014. The talented wheelman enters the season ranked second in series history with 35 career wins, winning an amazing 30.4% of his 115 starts. Add in 22 runner-up finishes and he has finished first or second in nearly half (49.6%) of the Truck Series events he has entered. "Rowdy" has led the series in wins four of the last five seasons, from 2009 to 2011 and again last season when he reached victory lane five times in 11 starts.

Racing prodigy Erik Jones, who turns 18 at the end of May, will be behind the wheel of the No. 51 ToyotaCare Tundra for the remaining 12 races beginning with the second event of the year at Martinsville (Va.) Speedway. Jones finished inside the top 10 in all five of his starts last season, including a dominant win at Phoenix (Ariz.) International Raceway in November when he became the youngest winner in Truck Series history.

Busch is hoping all the newness this week - new trucks, new qualifying procedures and new rules in place to limit bump drafting - will equal something new for him and the new-truck smell will turn into the sweet smell of success in the Truck Series at Daytona.

Kyle Busch, Driver of the No. 51 NCWTS Toyota Care Tundra:

Are you excited for the 2014 Truck Series season at KBM?

"We are really looking forward to getting the 2014 Truck Series season started at Kyle Busch Motorsports. Toyota and Toyota Racing Development (TRD) have put a lot of time and effort into the new Tundra that hits the track this year and it is going to make for an exciting season. It will be fun to watch our two young drivers continue to grow and build upon some of the success they achieved last season. With a full year of trucks under his belt now, I think Darrell (Wallace Jr.) can have a really strong season. He showed glimpses of his potential last year -- leading a lot of laps at several tracks and was able to get to victory lane late in the season at Martinsville. Erik (Jones) did a really nice job for us last year picking up wins in both the truck and the Super Late Model while running a very limited schedule. At just 17-years-old he shows a lot of poise behind the wheel, provides great feedback to the crew chiefs and he has already proven that he can win on some of the biggest stages."

Do you believe racing Nationwide and Truck Series events aids in performance?

"I would say so and I would argue the fact that it did help -- I've said that all the time. There are drivers out there -- there are the Jeff Gordon's, the Jimmie Johnson's that run way better just running one. I'm not one of those guys. I feel like running the Nationwide and the Truck helps me and gives me a better opportunity to be better on Sundays. I may still not win as much as say Jimmie Johnson or even Matt Kenseth who don't run as much, but to me I just feel like I'm better ready for Sunday than I would be just not racing those races. I think last year and every year except 2012, not running as many helps me and gives me a better opportunity to be ready to go come Sunday."

A Frenchman in NASCAR