Kyle Busch prevails at Kansas after a wild Truck race 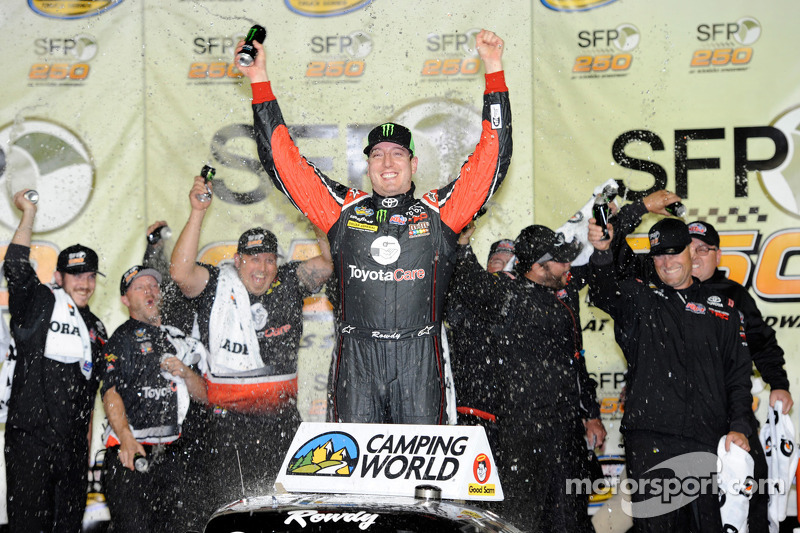 Kyle Busch claimed a dominating win on Friday night, pulling away from the field in the closing laps of the SFP 250 NASCAR Camping World Truck Series (CWTS) race at Kansas Speedway. He led 104 of the 167 laps that made up the race en route to his 37th-career series win and second of 2014. It was the 29th CWTS win for Crew Chief Eric Phillips, making him the series' all-time winningest crew chief.

"Congratulations to Eric for most wins," Busch said in victory lane.

Busch won from the pole, making him the first driver to do so in Truck Series competition since Aug. 2012 -- 32 races to go.

"Can't say enough about everyone from KBM," Busch said. "They do a great job for me."

Matt Crafton finished second in the No. 88 ThorSport Racing Toyota Tundra, and as the highest-finishing championship eligible driver, he took over the points lead. Joey Logano finished third in the No. 19 Brad Keselowski Racing Ford. Logano was second in the laps-led category, running up front for 41 laps, while the No. 20 NTS Motorsports Chevrolet of Austin Dillon led 18 laps late in the race before finishing in the fourth spot.

For much of the race, Busch was hounded up front by the Brad Keselowski Racing duo of Logano and Ryan Blaney, who was driving the the No. 29 BKR Ford. Logano and Blaney were both running ahead of Busch after a restart but after racing his teammate one moment, the next moment, Blaney found himself spinning and making heavy contact with Tyler Young, as well as Johnny Sauter.

Logano later found himself at a disadvantage after making a pit stop under green on lap 122, only two see a caution come out soon after, before front-runners such as Busch had headed for pit road. Blaney took the wave around during the caution to get back on the lead lap and restarted the race from the 11th spot.

Dillon, having 20 lap fresher tires than those running up front, took only two tires during the yellow flag to get off pit road first and restart with the lead. Busch restarted second with four fresh tires under him.

Busch lost a little ground on the restart, giving up second to Crafton as Dillon maintained his spot out front. With 26 laps remaining, Busch retook second from Crafton and then the lead from Dillon with 21 to go.

The SFP 250 was attrition-filled, with the yellow flag waving nine times for a total of 46 laps. All three Red Horse Racing entries -- the No. 77 of German Quiroga, the No. 7 of Bryan Ickler, and the No. 17 of Timothy Peters -- were casualties of cautions in the first 10 laps.

Quiroga and Peters each received damage in a lap one wreck, while Ickler had issues on lap eight.

Hornaday was among the drivers involved in multiple incidents. He was on the receiving end of contact from his former ride, the No. 9 NTS Motorsports Chevrolet, not driven by Brennan Newberry, on the first lap and then collided with teammate Ben Kennedy as they both tried to avoid Townley's spinning truck on lap 56.

Matt Crafton leads the standings by eight points over Timothy Peters and Ron Hornaday Jr., who are tied for second place.

A 'rowdy' night under the Kansas lights