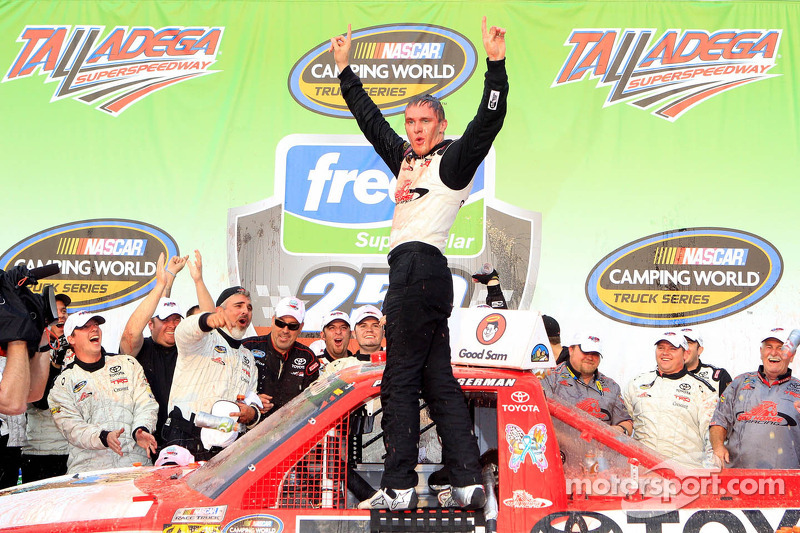 Tom DeLoach, owner of Red Horse Racing in the NASCAR Camping World Truck Series, celebrated the 300th start of his team Saturday in the Fred's 250 at Talladega (Ala.) Superspeedway. One of his drivers gave him the best celebratory gift possible, a trip to victory lane.

"This is a real team effort," No. 7 Red Horse Racing Toyota crew chief Chad Kendrick said after the race."

With a push from Johnny Sauter in the No. 13 ThorSport Racing Toyota, Parker Kligerman drove the No. 7 Red Horse Toyota out to the lead on the final lap, as several other trucks wrecked behind them. Kligerman drove on to the win, his first, ever, in Camping World Truck Series competition.

After the assist, Sauter finished second.

"I don't know what it is about these Toyota trucks," Sauter said. "But you get them in the draft and they run."

Ryan Blaney rounded out the top-five of the finishing order in the No. 29 Brad Keselowski Racing Ram.

The race wasn’t smooth sailing for Kligerman, though.

"We fought everything possible y9ou could fight today," Kligerman said. "We had a vibration. Then, we had a battery go down."

Kligerman's No. 7 crew changed the batter on the truck on pit road during a caution that came out with 18 laps to go. The lengthy pit stop to change the batter resulted in Kligerman being shuffled toward the back of the pack for the restart. With 10 laps to go in the race, he was credited with being 21st in the running order.

Due to the nature of draft racing at Talladega, several drivers spent time at the front, but mainstays at or near the front of the field included Dillon, Buescher, Kurt Busch in the No. 18 Kyle Busch Motorsports Toyota and Jason White in the No. 23 GunBroker.com Racing Ford.

All aforementioned drivers finished in the top-10, with the exception of White. He was among a slew of drivers caught up in a large multi-truck wreck on the final lap. Other drivers collected in the melee included Matt Crafton in the No. 88 ThorSport Racing Toyota, Justin Lofton in the No. 6 Eddie Sharp Racing Chevrolet and Miguel Paludo in the No. 32 Turner Motorsports Chevrolet.

As a result of the final-lap incident, the race ended under caution. In all, the yellow flag waved seven times.