Kaz Grala to compete fulltime in NASCAR Trucks in 2017 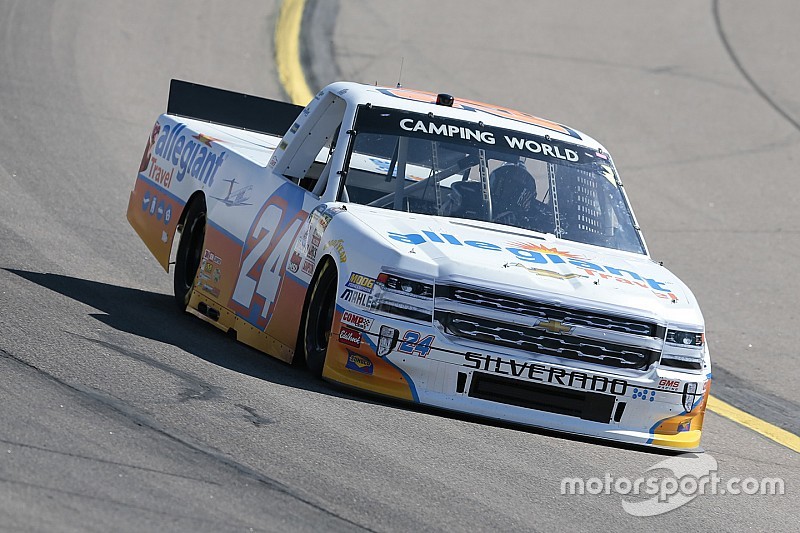 Kaz Grala will take full advantage of his 18th birthday later this month – he will compete fulltime next season in the Camping World Truck Series with GMS Racing.

Grala, who turns 18 on Dec. 29, ran a partial schedule with GMS this season while also competing in the K&N Pro Series East for Ben Kennedy Racing.

Grala, of Westborough, Mass., will drive the No. 22 Chevrolet for GMS, which won the Truck series championship this season with driver Johnny Sauter.

“I am beyond thankful to have an opportunity with GMS Racing to run fulltime in the NASCAR Camping World Truck Series in 2017,” Grala said in a statement. “This organization has been on a steep rise the past couple of years, and it’s been fun being a part of it in 2016.”

Grala ran nine races this season with GMS and earned three top-10 finishes, including a career-best seventh at New Hampshire.

“I’m looking forward to next season with GMS and working through this transition with Kaz,” Baxter said. “I really enjoy helping young drivers get started in this series and developing their talent, and I saw what Kaz accomplished in the few races he ran last season.”

Grala,  an honor-roll high school senior at Worcester (Mass.) Academy, already has had a successful and diversified racing career.

Grala also has excelled in road racing. He has won the 12 hours of New Jersey Motorsports Park, the 13 hours of Virginia International Raceway, and competed in the 2016 Rolex 24 at Daytona.

“GMS Racing has really gone out of their way to bring some of the best people in the industry on board,” he said. “I’m extremely excited to get to work with Jerry, who not only is a great match for me personality-wise, but also is very accomplished in the NASCAR world.”