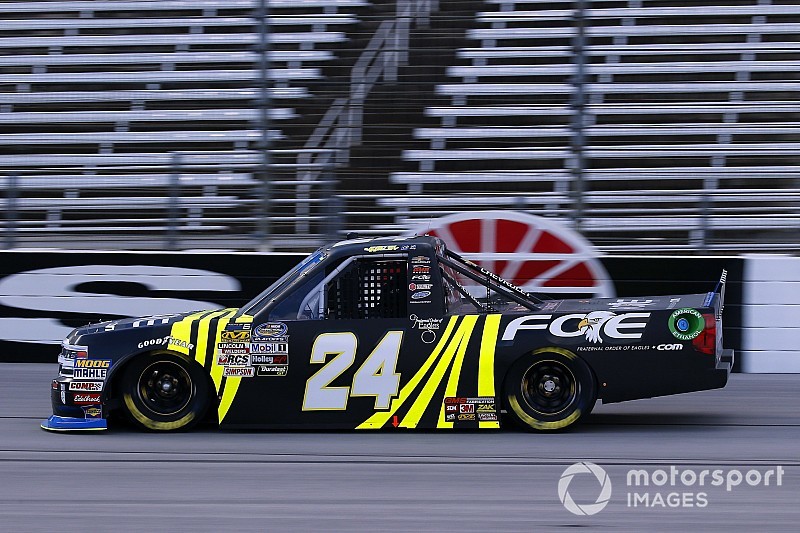 Todd Gilliland was out front for the final stage of the 147-lap playoff race, but after being harassed for several laps, Stewart Friesen overtook him for the lead on Lap 109. However, a speeding penalty during his final pit stop allowed Gilliland to reclaim control with a 4+ second lead over Haley.

Gilliland appeared to have secured his maiden win until a dramatic turn of events on the white flag lap. The KBM driver ran out of fuel down the backstretch, allowing Haley to slip by and snag the victory for himself, launching him directly into the Championship 4 at Homestead.

Johnny Sauter led the way from pole position, but was passed by Friesen on the second lap of the race. One lap later, the first caution flag of the night flew when Bo LaMastus backed his truck into the wall.

Racing resumed on Lap 7 and it quickly became a three-wide fight for the lead with Justin Haley prevailing over Gragson and Friesen.

Sauter then fell off the pace and was forced to make an unscheduled pit stop due to a cut tire.

David Gilliland worked his way up to second in the early going, only to pound the wall out of Turn 2 and force another yellow.

The next green-flag run didn't last long as Codie Rohrbaugh spun back in the pack.

The second stage got underway with a new cast of characters up front with Myatt Snider leading the way after pitting prior to the stage break. Soon after, a multi-track wreck break out involving Sauter, Gragson, Tyler Young, Cody Roper and Joe Nemechek.

The race resumed on Lap 50 but would go yellow again when Creed wrecked and found the outside wall. He would then bring out the seventh caution of the race after another incident with his wounded truck.

Snider's strategy worked out and he hung on for the stage win ahead of Austin Hill, Haley, Enfinger, Crafton, Moffitt, Tyler Dippel, Brennan Poole, Gilliland and Nemechek.

NASCAR Mailbag: Who will be in the Championship 4?