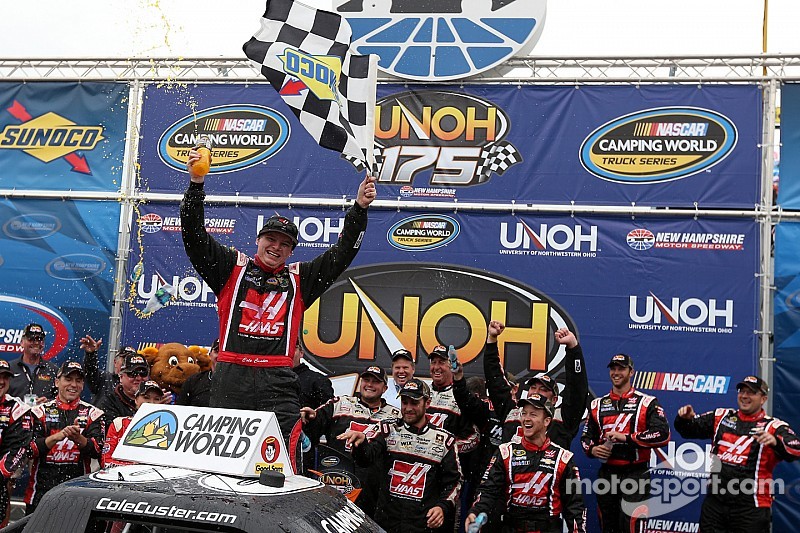 Cole Custer will compete in 10 races for JR Motorsports in the Camping World Truck Series.

The move marks JRM’s foray into trucks after winning its first title in the Xfinity Series with Chase Elliott last year.

“This is a new and exciting venture for us,” said team co-owner Kelley Earnhardt Miller in a release.  “We have come a long way since racing street stocks in 2002, and we are constantly evolving.  Expanding into the truck series on a part-time basis is furthering our growth.
"Bringing in a talent like Cole and a great partner like Haas Automation is a great way to do that.  I’m proud of the direction we’re heading.”

Custer, who turns 17 on the 23rd of January, ran nine truck races for Gene Haas in 2014. His first career victory came from the pole at New Hampshire in just his seventh start. Custer accomplished his first career pole four races earlier in the truck tour’s return to Gateway Motorsports Park.

Behind the wheel of the No. 00 Haas Silverado, Custer earned two top fives, six top 10s and had a remarkable average qualifying effort of 8.2 and an average finish of 10th. Haas will continue to support Custer's effort.

I have complete confidence in Dale Jr., Kelley, and Cole’s ability to take Haas Automation to victory lane.

"When presented the opportunity to sponsor the championship team of JR Motorsports with Cole as the driver, I simply said yes.  I have complete confidence in Dale Jr., Kelley, and Cole’s ability to take Haas Automation to victory lane.”

The Ladera Ranch, California native cut his teeth in the K&N Pro Series prior to his limited run in the truck series. At 15, Custer raced in his first full season with Ken Schrader on the East tour and posted two wins, five top fives, six top 10s and two pole positions. On the West tour, he won one pole and scored a top 10 in two starts.

In 2014, Custer ran 10 races between the two K&N Series tours and won from the pole at Phoenix and from the front row at Richmond in Bill McAnally-prepared cars.

With all that JR Motorsports has accomplished over the past few years, we know we have everything needed to go win races and compete.

“I’m so excited to get this season started,” Custer said.  “With all that JR Motorsports has accomplished over the past few years, we know we have everything needed to go win races and compete.  I couldn’t ask for a better opportunity with a better organization.
"I really want to thank Haas Automation, along with Kelley and Dale Jr. for putting this deal together.”

Joe Sheer, who enjoyed tremendous success in the truck series with Johnny Sauter, joined Haas as Custer’s crew chief last year. He will remain on in that role at JRM. The team will operate out of a satellite shop in Mooresville, N.C.

"Joe is a big help," Custer said. "He has a great set up book with all of his experience in the truck series and with Johnny Sauter. He’s been a big help to me and the team. I’m really excited to be working with him again."