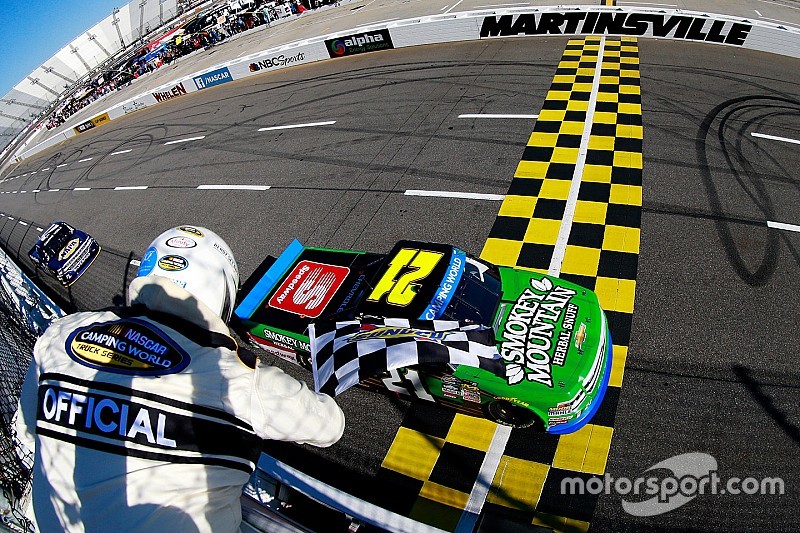 Johnny Sauter’s most recent win came in the Camping World Truck Series season opener at Daytona in February, but he couldn’t have timed his next one any better.

The victory – the 12th of his career – ensures Sauter will be one of the four drivers to compete for the series championship in the season finale at Homestead-Miami Speedway.

“I’m so proud of everyone at GMS Racing. I seemed to have some brake problems early in the race and I tried to bide my time and take care of my truck as best I could and I probably did that for 100 laps,” Sauter said.

“Then after the last caution I was like, “I have enough brakes to get to the end’ so used them as hard as I needed to.”

Team owner Maury Gallagher said the win was an important one for his organization.

Chase Elliott across the line second

Elliott had a few laps at the end to try to work his way around Sauter but never really got in position to make a pass, or nudge him out of the way.

“Coming back to the checkered (flag) was probably my best opportunity to get him but you have to be careful. Those guys are racing for a championship,” Elliott said. “Some days it’s not worth wrecking a guy or whatever.

“Obviously, I wish we could have got him but I feel like I learned a lot to help me in Sunday’s race.”

After the race, Kennedy confronted Ben Rhodes and the two got in a heated argument. Rhodes hit Kennedy from behind on Lap 176 of 200, sending Kennedy for a spin in an incident that also saw John Wes Townley also slam into Kennedy.

Asked about his reason for confronting Rhodes, Kennedy told Motor Racing Network, “He just wrecked us. He tried to wreck us earlier, failed at it and got to us again and just wrecked us. He pile-drived into us. It’s unfortunate. There was not much of a conversation.”

“I know he’s in the Chase fighting for the championship,” Rhodes said of Kennedy. “We finally got our truck running well after a hard day. I was trying to make a run through the corner. I thought I could nudge him cleanly – I didn’t want to cause any problems.

“I got into him in the back a second time by accident and spun him around.”

Coughlin to sub for injured Townley at Texas