Jeffrey Earnhardt continued to impress this past weekend at Phoenix International Raceway (PIR) for the running of the Lucas Oil 150 on Friday night under tough circumstances. The 4th generation Earnhardt battled the flu all week and was still under the weather when he strapped in for qualifying for the event after spending most of his Phoenix trip in and out of the infield care center at PIR.

Earnhardt qualified the #1 Fuel Doctor Platinum Chevy in the 29th position, after several trucks went home not making the 36 truck field. Earnhardt knew that this race was going to be a battle of attrition.

When the green flag dropped for the 150-lap event, Jeffrey worked through a tight condition that unfortunately put him one lap down, before a caution on lap 41 allowed the "Team Green", Fuel Doctor pit crew to make adjustments. Crew chief Joe Lax requested four tires and fuel with adjustments to the track bar, and as Earnhardt left the pits, he remained in the 32nd position, one lap down.

Still getting acclimated to the track, Earnhardt continued to increase his lap speed before another caution fell on lap 57. Crew Chief Joe Lax and team green went to work once again, this time adding a spring rubber attempting to help turn the Fuel Doctor Chevy as Jeffrey restarted in the 29th position.

Earnhardt still battling a tight condition stayed in the hunt in the 25th position before a string of cautions showed just how tough the NASCAR Camping World Truck racing really is at Phoenix International Raceway. Four cautions flew within the next thirty laps as Jeffrey maneuvered his Fuel Doctor Chevy through the mayhem of trucks around him and landed himself in the 21st position.

"Jeffrey turned his fastest lap of the race on lap 140, which is exactly what I thought he would do." Said team owner Rick Ware. "This is a tough track to learn, but once he finally got a good line down that started working for him and a feel for the track, I knew he would really start improving on his lap time."

A restart with just eleven laps remaining gave Jeffrey the opportunity to race his way into a respectable top-20 finish as the youngster took the checkered flag in the 19th position.

" I was really not feeling well today, I have the flu or something, and I was trying to just stay focused on the task at hand which was to finish the race and just learn the track and stay out of trouble" said Earnhardt. "My crew chief Joe Lax and my driver coach Jerry Nadeau both have extensive experience at this track, and were telling me that it isn't an easy track on drivers or trucks and I would have to agree." "We struggled a bit with our truck tonight; I was pretty much tight center off the whole night. The Fuel Doctor Chevy Pit Crew did an awesome job helping me maintain and sometimes gain some positions on pit road as they continued to make adjustments to try and free me up a bit. I really am grateful for the team we have assembled. These guys are all new working together and me being a rookie, we are all just learning as a new team and I am really proud of them and how well everyone is working together." Said Earnhardt. " I really want to also thank the NASCAR fans for coming out and supporting us in the NASCAR Camping World Truck Series at PIR and I hope that we can continue to give them a good show." 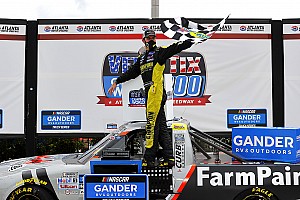