History in the making for Matt Crafton 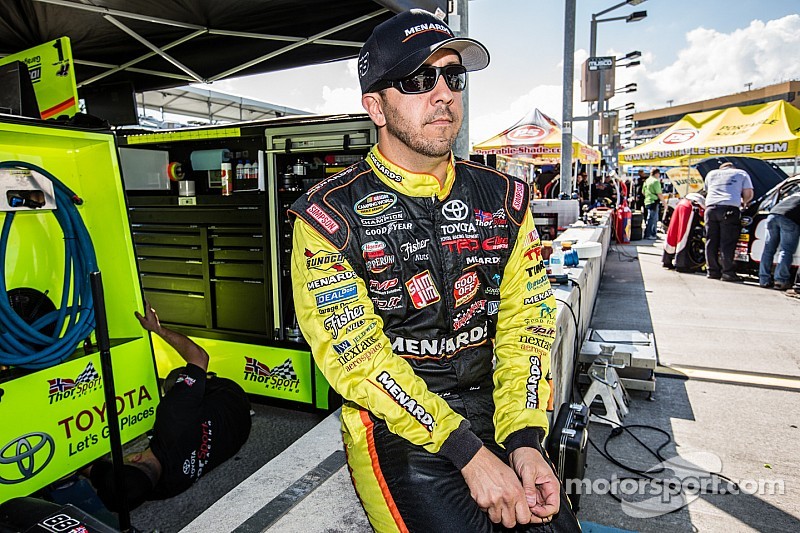 The CWTS is set to see its first back-to-back champion tonight, should he finish 21st or higher.

The NASCAR Camping World Truck Series (CWTS) has never in its 20-year existence had a back-to-back champion. On Friday night, Matt Crafton looks to change that. The 2013 NASCAR CWTS champion heads into Homestead-Miami Speedway leading the overall standings, holding a 25 point edge over Ryan Blaney.

As it stands, Crafton needs to finish 21st to clinch the title, but the defending series champ isn’t ready to talk about delivering a repeat. During Thursday’s NASCAR press conference the ThorSport Racing driver was asked his thoughts being on the verge of history.

“We’re not going to talk about that,” replied Crafton.

It is clear that the native from Tulare, California is not taking anything lightly, knowing that anything can change in a second. Surprisingly, Crafton said he “feels a ton less pressure” about contending for this year’s title in comparison to last year.

Not only would a back-to-back championship put Crafton in elite company as the only driver to accomplish that feat, but he would join an exclusive club of drivers with multiple Truck titles. The series has had only three multi-time champions: Ron Hornaday Jr. (4), Todd Bodine (2), and Jack Sprague (2).

The 38 year-old doesn’t have a historically stellar record at Homestead-Miami Speedway, scoring two top fives in 13 races at the 1.5-mile oval. The season has been a highlight of career-highs for Crafton though, setting personal bests in wins (2), top fives (13), and laps led (298). It will be interesting to see if the veteran can overcome his South Florida stagger and continue what has been an incredible season.

The NASCAR Camping World Truck Series goes under the lights in Homestead tonight in what is sure to be an intense Ford EcoBoost 200. Crafton must finish 21st or higher should Blaney manage to win the race. Last year, Crafton finished 21st.

The 20th season of NASCAR's third national touring division is nearly in the books, but whose name will be on the trophy?

Joey Barnes is the co-founder of Tribute Racing and a contributor to Motorsport.com

Wallace wins the finale as Crafton is crowned champion