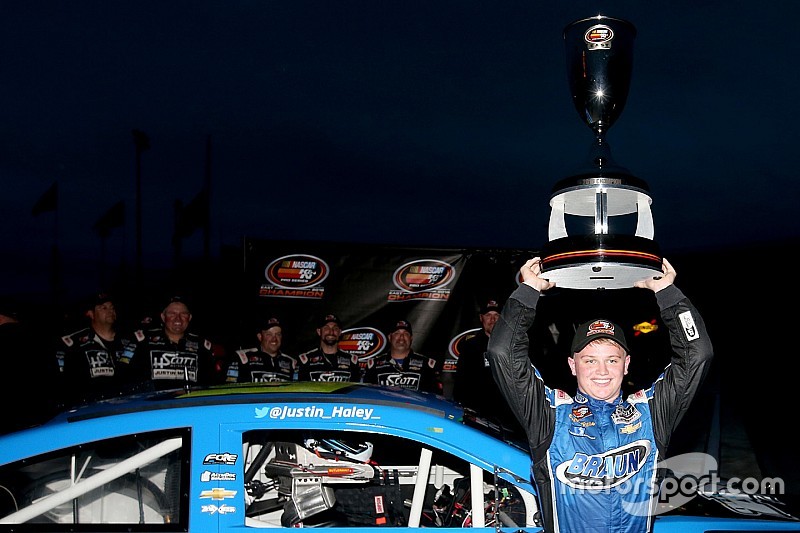 Justin Haley is celebrating a championship and a new ride in NASCAR this weekend.

Haley, the 2016 champion of the K&N Pro Series East, and GMS Racing announced on Friday Haley will compete next season in the Camping World Truck Series with the organization.

Haley won’t turn 18 years old until April 28, so he will miss the season opener at Daytona and the March 4 race at Atlanta Motor Speedway.

“The past few years in K&N has been an effort to get to the next step in my career and I don’t think we could have done any better than joining GMS, especially at this point in time,” Haley said.

“Everyone knows what they’ve been able to accomplish over the last year and it’s that type of consistency and drive that every driver wants to see when making a decision like this.”

Haley ended the K&N Pro Series East season with two wins, 13 top-five and 14 top-10 finishes in the 14-race schedule. He will accept his title on Saturday night in Charlotte at the annual NASCAR touring banquet.

Haley, who has competed in a six Truck races already, will drive the No. 24 Chevrolet beginning with the April 1 race at Martinsville (Va.) Speedway. Haley’s rookie season will be directed by second-year crew chief Kevin Bellicourt.

“Justin is a great driver, who has had a lot of success fast, but he has handled it like a driver who has been doing this for years,” Bellicourt said. “I’m excited to see what he’s able to do once we get him in the No. 24.”

Haley will be teammates to Kaz Grala and reigning Truck series champion Johnny Sauter next season.

Kaz Grala to compete fulltime in NASCAR Trucks in 2017