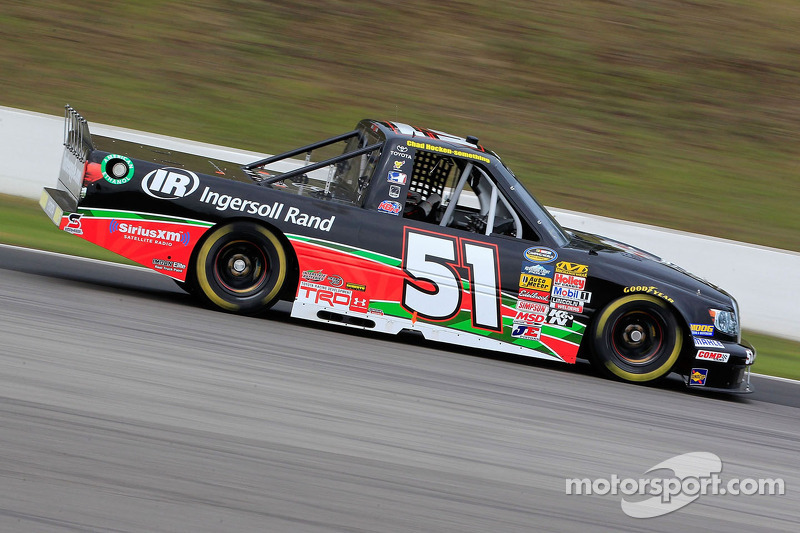 Making his track debut at Las Vegas (Nev.) Motor Speedway, Chad Hackenbracht's plan was to play his cards right and have a solid finish for his No. 51 Kyle Busch Motorsports (KBM) team. Running as high has eighth; the rookie driver thought he was on the fast-track to a solid point's night until the handling in his Toyota Tundra went away just past the halfway mark in the 146-lap event, eventually leading to a late race spin. Going one lap down with less than 50 laps remaining, @Hockensomethin was able to get the "Lucky Dog" award after a late-race caution and gained four positions in the final two laps to finish 17th in 17th Annual Smith's 350. 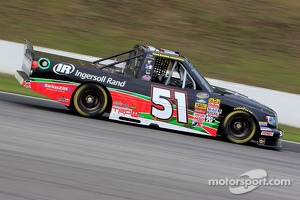 "It was a tough day for everyone on this No. 51 Tastee Apple/Ingersoll Rand Toyota Tundra team," Hackenbracht said. "We had a really good truck at the beginning of the race and got loose as the race progressed. I got a little sideways; got in the wall a little bit and then lost it off of Turn 4. We bolted on a set of tires that didn't really work will with our truck so we got mired a lap down, but got the 'Lucky Dog' and just ran out of time there at the end. I hate it for these 51 guys - I know we lost points tonight but I'm confident they can pick them up in the five remaining races."

Starting the 146-lap event from the 10th position, Hackenbracht maintained his position within the top-10 until the first caution flag of the night was displayed for a spin by the 32 truck in Turn 4 on lap 15. Crew chief Ryan Fugle opted to bring his rookie driver to pit road for a trackbar adjustment and fuel to aid in the handling of his Tastee Apple/Ingersoll Rand Toyota Tundra. Due to fast work by the over-the-wall-crew, the No. 51 machine would take the lap 18 restart from the ninth position.

Running as high as eighth and as low as 10th over the next 30 circuits, Hackenbracht began to battle a Tundra that was, "free on entry and tight off." A welcoming opportunity for relief was displayed on lap 48 when Bryan Silas brought out the third caution for a spin off Turn 4. Fugle opted to bring the No. 51 machine down pit road for four tires and fuel and when racing resumed on lap 51 the KBM machine was scored 16th.

The NCWTS rookie worked his way up to the 13th position by lap 60 and ninth by lap 65, which is where he was scored when the lap 75 caution was displayed for a spin by the 19 of Ross Chastain. The 22-year-old driver said his Tastee Apple/Ingersoll Rand Tundra remained, "free on entry in Turns 3 and 4," so Fugle brought the No. 51 machine to pit road for a third time for four tires and fuel. When racing resumed on lap 78 Hackenbracht was scored 17th.

Shortly after the restart, @Hockensomethin radioed into his crew that his Toyota Tundra was, "free center and off." The rookie would maintain a position inside the top-20 until Bryan Silas brought out the sixth caution on lap 93. With track position at a premium, a trackbar adjustment and fuel were in order for the No. 51 machine. Hackenbracht would take the green flag from the eighth position with 50 laps remaining in the Smith's 350.

Maintaining a solid position inside the top-10, Hackenbracht was on a mission to save gas in the closing laps of the 17th Annual NCWTS race at LVMS. However, a loose-handling Tundra changed the game plan when the No. 51 machine went for a spin off Turn 4 on lap 110 - bringing out the eighth caution of the night. With nothing to lose, Fugle brought his rookie driver to pit road under caution for four tires, fuel and a chassis adjustment. When racing resumed on lap 112, the No. 51 Toyota was scored 22nd, one lap down to the race leaders.

Fighting a Tundra that was, "loose in, tight in the center" Hackenbracht fought hard to maintain a position inside the top-20, running as high as 19th but as low as 21st. Fortunately, the No. 51 machine was in the "Lucky Dog" position when the ninth and final caution flag was displayed for the 10 truck. Fugle would have the over-the-wall-crew administer four tires, a trackbar adjustment and wedge adjustment before sending the No. 51 machine back to the 1.5-mile oval in the 21st position with two laps remaining. Making a late-race charge, Hackenbracht would cross the stripe in the 17th position, his third top-20 in four NCWTS starts.

KBM teammate, Joey Coulter finished 13th behind the wheel of the No. 18 GunBroker.com Toyota Tundra.

Following the 17th race on the 2013 schedule, the No. 51 Toyota Tundra is second in the 2013 NCWTS owner points standings a mere 26 markers behind the series leading No. 88 team.

This was Hackenbracht's fourth and final start behind the wheel of the No. 51 Tastee Apple/Ingersoll Rand Toyota Tundra for Kyle Busch Motorsports. The New Philadelphia, Ohio native finished 21st at Texas Motor Speedway in Fort Worth, 15th at Pocono (Pa.) Raceway, a series-best second in the Inaugural Truck Series 250 at Canadian Tire Motorsport Park and 17th in his track debut at Las Vegas (Nev.) Motor Speedway.

The NCWTS will take two week's off before heading into the final five races of the season. Owner-driver, Kyle Busch will be back behind the wheel of the No. 51 ToyotaCare Tundra for his ninth start of the season in the Fred's 250 powered by Coca-Cola on Saturday, Oct. 19 at 4 p.m. ET on FOX Sports 1.