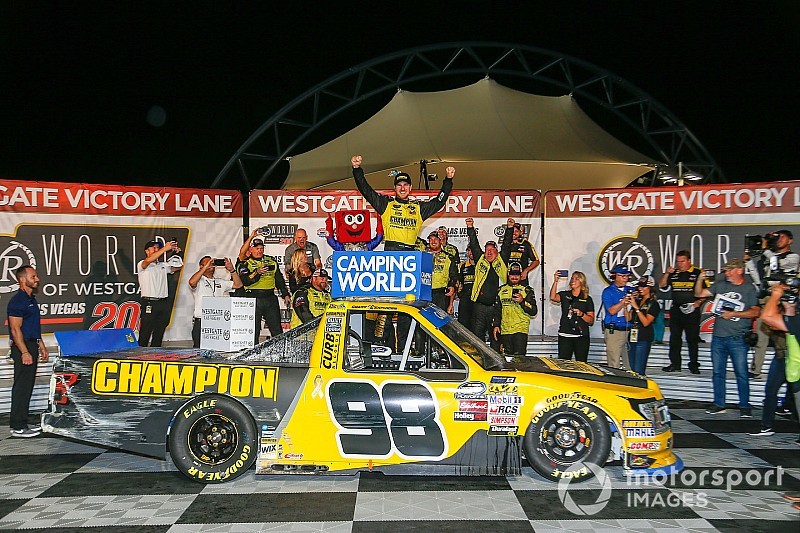 For Grant Enfinger, timing was everything Friday night.

When then-race leader Brett Moffitt encountered a fuel pickup problem on the restart of the third overtime, Enfinger moved into the lead and then held off a furious challenge from Johnny Sauter to win the Westgate 200 at Las Vegas Motor Speedway.

The win is the first of the season for Enfinger, a victory that also locks him into the second round of the playoffs regardless of his performance next weekend at Talladega (Ala.) Superspeedway.

“It’s kind of the culmination of the whole year. We’ve put together the pieces needed to win a race individually but not as a whole as a group,” Enfinger said in Victory Lane. “The truck was great – we had the best truck out there.”

Enfinger said he was concerned on the second to last pit stop of the race when his crew chief decided to pit only for gas, but the strategy ended up paying off.

“I was concerned but I felt in my mind we were just going to go out here and race. We weren’t going to race with respect like we always do, we’re going to race how all these guys have raced us,” he said.

“We had to step it up and be aggressive tonight. All these guys did. We didn’t have the truck to win yesterday in practice but these guys stepped it up and made it the best truck out here.”

With 52 laps remaining, Todd Gilliland – who led earlier in the race – and Jesse Little wrecked to bring out a caution.

All of the lead-lap trucks elected to pit but Enfinger took fuel only and remained in the lead on the restart on Lap 90. He was followed by Stewart Friesen, Rhodes, Myatt Snider, Brandon Jones and Noah Gragson.

Rhodes powered around Enfinger and into the lead with 40 to go but Enfinger remained close enough to continue a side-by-side battle.

With 35 to go, Friesen spun and collected John Hunter Nemechek just after Sauter moved into the lead for the first time. Sauter led the way on the restart with 31 laps remaining followed by Rhodes and Haley.

Crafton moved into the lead with 30 to go as Rhodes and Sauter battled for the second position. Sauter got alongside and then past Crafton for the lead with 26 to go.

With 22 laps remaining, Friesen spun through the infield to bring out yet another caution. On the restart with 18 to go, Sauter led the way followed by Crafton, Enfinger and Rhodes.

Cory Roper and Jones wrecked with 14 laps remaining, bringing out another caution and bunching the field again. Sauter led Rhodes and Moffitt on the restart with 10 to go.

Moffitt powered into the lead shortly after the restart as Rhodes remained in second.

Nemechek and T.J. Bell, Little, Timothy Peters and Austin Hill wrecked on the restart lap to force a third overtime as Moffitt remained in the lead on the restart.

Enfinger held off Crafton to claim the Stage 2 victory.

Following the break between Stages 1 and 2, Friesen took over the race lead following pit stops and led the way when the race returned to green on Lap 38. He was followed by Gragson and Friesen.

On Lap 41, Enfinger went low and got around Friesen to take the lead for the first time. One lap later, Friesen got back around Enfinger to re-take the lead.

Bo LeMastus hit the wall off Turn 4 on Lap 46 to bring out another caution. On the restart on Lap 50, Friesen continued to lead the way followed by Enfinger and Crafton.

With eight laps remaining in the second stage, Enfinger made his way around Friesen and back into the lead. Crafton moved up to second and Gragson was running third.

Riley Herbst hit the wall in Turn 4 with five laps but the race remained under green. He eventually took his truck to the garage.

Gragson led all 30 laps on his way to the Stage 1 victory over Nemechek.

Gragson, the pole-winner, took command early in the race until Tanner Thorson slammed the wall on Lap 4, bringing out the first caution.

The race returned to green on Lap 13 with Gragson in the lead followed by Friesen and Jones.

With 15 laps remaining in the first stage, Gragson held a small advantage over Gilliland with Nemechek moving into third.

Nemechek got around Gilliland and moved into the second position on Lap 18 as Gilliland dropped back to third.

With five laps left in the first stage, Gragson held a more than 3-second lead over Nemechek as Friesen moved into the third position.

The trucks of playoff contenders Crafton and Rhodes had to start the race from the rear of the field for making unapproved adjustments following qualifying.

GMS Take on Trucks: Teammates aiming for the 2018 crown