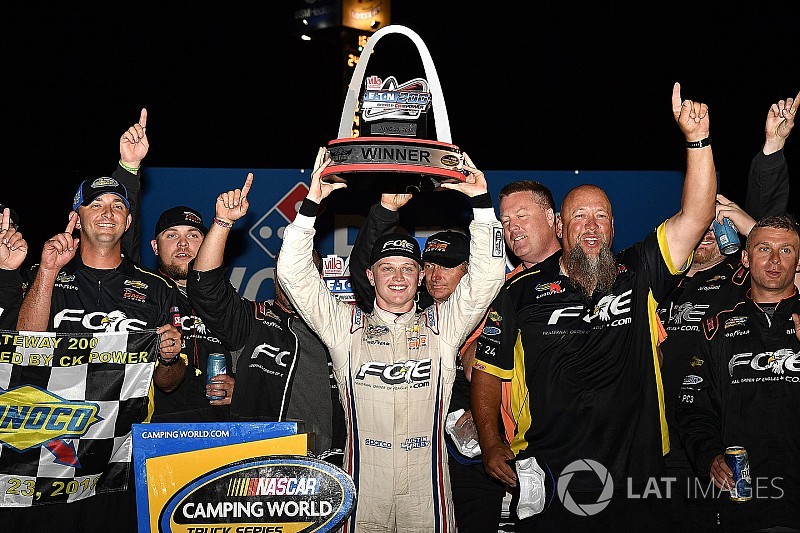 Haley survived a wild finish to the Eaton 200, an action-filled race that featured two late caution flags to score his first win in 37 series starts.

“It was a long time coming,” said Haley. “I was more speechless in Victory Lane than anything else because you work so hard for so long and when you finally win it just seems so surreal to be celebrating in Victory Lane and I was just thinking of finally getting a win.”

Haley qualified fourth and remained in contention throughout the race before making his pass for the lead by Noah Gragson on Lap 154. He remained out front the rest of the way including one final late-race restart.

“Believe it or not I was really calm on those final restarts,” said Haley. “I focused on getting a good restart and was able to stay out front and celebrate the win.”

Although there’s still a lot of racing to go this season, Haley feels much better knowing he’s already qualified for the NASCAR playoffs.

“We haven’t even reached the halfway point of the regular season and to have this win now and be qualified for the playoffs feels really good,” he said. “A lot of people ask how we can make our team better but I feel we’ve been really good already.”

One reason why he feels his team is doing so well is the hard work of his crew led by crew chief Kevin Bellicourt and experience of fellow GMS teammate Johnny Sauter.

“I can’t think Kevin, Mike (Beam), Mr. Gallagher and the entire organization for their support,” said Haley. “I love being a part of this team.”

Haley will join the rest of GMS Racing this weekend in Chicagoland where Sauter is the defending winner of the Truck race.

Having the former champion available for advice and questions is something Haley enjoys as being a part of the GMS team.

“Johnny has been great to me throughout this year and is always willing to talk and share advice,” added Haley. “I hate racing against him though because he’s so good and he pushes us all to be better and step up our game.”

Haley finished 14th at Chicagoland last season will look to become the second multi-race winner this season in the Truck series.

Watch Sauter and Sargeant talk about competing this weekend at Chicagoland Speedway here: