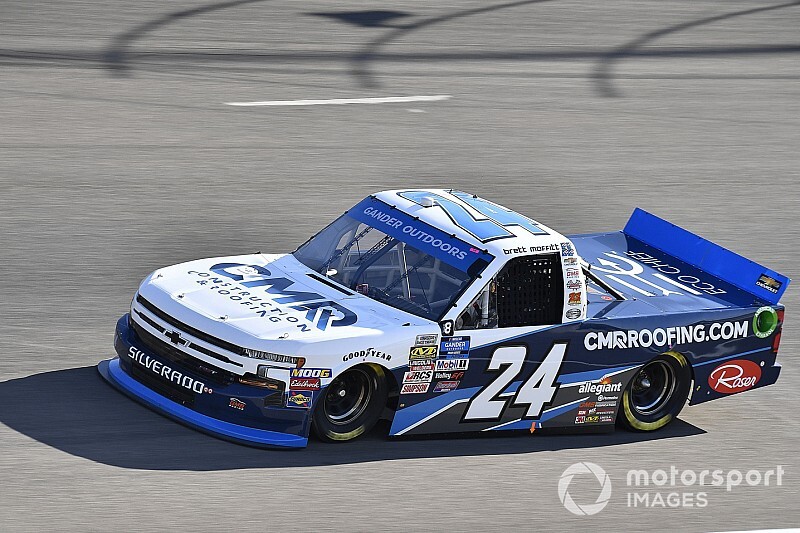 Not much is changing at GMS for the 2020 season.

Brett Moffitt and Sheldon Creed will again return as full-time drivers competing for the GOTS championship. Sam Mayer will also return in an expanded schedule while he also competes for the ARCA Racing Series title.

“To have all three of these talented young men back with our organization is a blessing,” said Mike Beam, team president. “They have all brought a lot to the table for GMS in 2019. Mayer winning the K&N East Championship, Moffitt being in the hunt for GMS’ second Truck championship and Creed with multiple runner-up finishes, needless to say, that they have represented GMS well in 2019 and I have no doubt that success will continue in 2020.”

Moffitt, the reigning Truck Series champion, is potentially on his way to a second with four wins this season.

“I can’t thank Mike (Beam, team president) and Mr. Gallagher (team owner) enough for the opportunity to compete full-time with GMS Racing in 2020,” said Moffitt. “It’s been awesome to work with this organization this year and we’ve been competitive each and every week. We’ve earned four wins so far this season and held a steady lead throughout the playoffs. Having next year locked down allows us to focus completely on competing for a championship this year. Returning with the same teammates as well will be really cool. We already know how to work together and help each other while maintaining a bit of that competitive edge. I can only imagine what we will be able to accomplish in 2020 building off the momentum from this season.”

Creed has two runner-up finishes this year as he continues to pursue that elusive first win, 10th in the championship standings in his first full-time season.

“I feel very confident going into next season with GMS Racing. I know I have the best group of people around me and the best organization to go out next year and compete for wins and hopefully the championship,” Creed stated. “I’m thankful to Mike (Beam, team president) and Maury (Gallagher, team owner) for the opportunity and continued support. The beginning of this season was a bit of a learning curve for me, but we found our groove and I’m excited to go out and compete for wins and build momentum for next year. It’ll be great to have my teammates back with me as well.”

“I am excited to be returning to GMS Racing in 2020,” said Mayer. “We are being very aggressive with my schedule next year, and I think that will help challenge me and help me grow even more in my career. We are doubling the number of Gander Trucks races from what I am running in 2019 and once the ARCA series is finalized, I should be running more races than the entire truck schedule. I’ve been able to accomplish a lot this season with the support from GMS and I can’t wait for next season.”