German Quiroga, a Mexican racer fighting to make it in the world of NASCAR 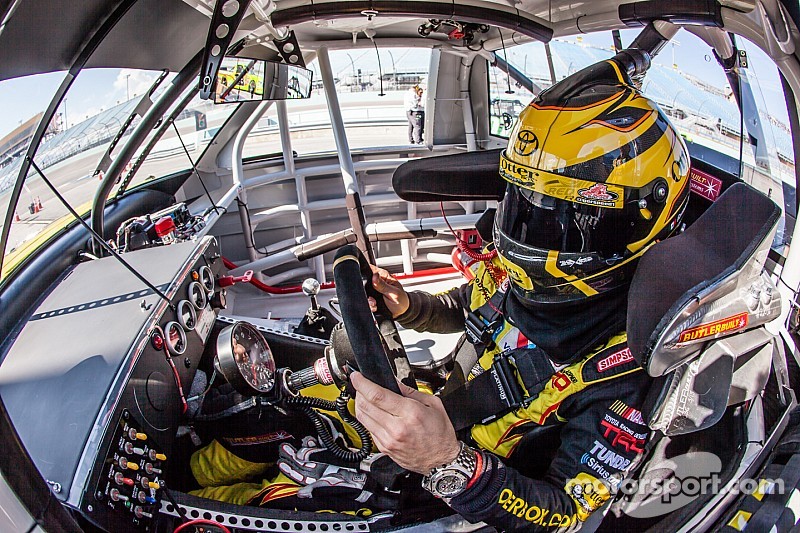 German Quiroga Jr. is a rising star in the Camping World Truck Series and I spent some time with him this past weekend.

During the final weekend of NASCAR Camping World Truck Series action at Homestead-Miami Speedway, I spoke with rising star and Red Horse Racing driver German Quiroga. He is pushing hard to be the first Mexican to win in one of the sport's three national touring series and in the few chances he's had thus far, he definitely made sure they knew he was there.

Personally, I am a major fan of his aggressive style and made it known when speaking with him. Both Brad Keselowski and Ryan Newman had to defend their actions on the track recently, using the fact that racing legends Dale Earnhardt and Ayrton Senna would have done the same in their defense. Unsurprisingly, guess which two names Quiroga models his driving after...

Ready to fight, in order to win

"They used to call me Dale when I was racing in Mexico, because nobody wanted to see my car in their mirror. (laughs) They knew it was going to be wild. The two drivers I followed were actually Ayrton Senna in Formula One and Dale Sr. here."

Breaking in, I added "Good choices," provoking a smirk from the Mexican racer. Pointing towards the finish line, I recalled the finish here when Cale Gale controversially pinched Kyle Busch into the wall in order to win his first (and only) race, asking if he would be willing to do the same.

It's one of the things I did in Mexico as well. I would try to keep my tires and my equipment fresh so whenever the last restart comes, I can really attack

German Quiroga on his ability to close races

Without hesitation, "I would do the same thing," he told Motorsport.com. "If you are that close, you have to go all out. This series is so competitive and when you don't have the speed, it's just so hard to make things happen. But when you are fast and you are battling for that position, you're going to take advantage of that (opportunity)."

"They know I drive hard but I respect (others) as well" he added. "I've been able to come close, be aggressive and have fun but that win hasn't arrived. When we have that chance, we just have to try to take it and if it happens, it happens. If it doesn't, we'll keep on trying.

Before his foray into the Trucks, he may only be known by NASCAR fans as that guy who won a bunch of titles in Mexico (three NASCAR Mexico titles in succession to be exact.) Quiroga's father also raced back in the day though, and he shared his father's passion. However, NASCAR was not his first choice as he aimed for a career as a professional racer.

"I tried to race Formula cars, winning championships there as well. I just didn't have the money to keep on racing. I wanted to get to IndyCar, but it just didn't happen so I went back to Mexico and started racing different series. I went to NASCAR Mexico and was very successful there. I just decided to keep on racing NASCAR, move here and learn as much as I can. My family, we'd always watch NASCAR, as well as Formula One on the weekends. So I was fairly familiar to what it was about."

Outside of his aggression, one thing German is known for is his ability to be a closer. When the checkered flag nears, he always seems to be that driver cutting his way through the pack. He explained his tactics, revealing to Motorsport.com, "It's one of the things I did in Mexico as well. I would try to keep my tires and my equipment fresh so whenever the last restart comes, I can really attack and be more aggressive. Whenever I am battling for fifth or sixth, I just let them go and let me truck settle in order to make it work at the end."

"If you try to pass them for 20 laps, you're going to be out of tires and when the last restart comes, you're not going to have anything to fight with. I try to keep my weapons hidden before I make my move."

Battling with the big boys

One of his more impressive drives came at Texas, holding off a hard-charging Kyle Busch in an inferior truck and on inferior tires. A restart put the No. 51 alongside him though, but Qurioga continued to push until he eventually ended up in the wall. He refused to settle for second, a mentality I wish more racers today possessed.

"I felt very comfortable and I could see him (Busch) coming," Quiroga said as he recalled the battle. "He would try going high and I would make him lose (the) nose a little bit. Kyle probably has thousands of laps, it's quite a difference from me. To be able to run with him and learn what I can, it's really good. It has been working ... We're getting there."

We've been really competitive, but just with no luck at all. We've been able to win races, but it just hasn't happened ... We're just going to keep trying.

Quiroga on seeking his first win

As for drivers he's leaned on for advice, I found it interesting that he relies on someone who is no longer actively competing in the series, but is still a two-time CWTS champion ... Todd Bodine. "He's been helping me out a lot, giving me his advice (and) calling me after races and telling what he saw, what I can do to improve."

Although he placed a career-high sixth in the championship standings, one position behind veteran teammate Timothy Peters, Quiroga is still yearning for more.

"We've had some ups and downs. We started pretty good and then we started missing speed and the development on the trucks. (We started finishing 12th, 15th, instead of getting top tens. That just hurt us in the points. We started trying to make changes and to find the speed on the trucks and it took us a while, six or seven races, coming back a little stronger."

"We've been really competitive, but just with no luck at all. We've been able to win races, but it just hasn't hapened. It is what it is ... We're just going to keep trying."

An uncertain future, but somebody the sport needs

As our discussion came to a close, I found it unfortunate to hear that he has not yet locked up his seat with Red Horse for the 2015 season. Homestead winner Darrell Wallace Jr. is in a similar position, but may end up landing a gig in the Nationwide (soon to be Xfinity Series). As for Quiroga, his NASCAR future rides on sponsorship money, just as so many others trying to make it today are.

"I'm trying to put everything together to keep racing. Sponsorship wise, it's going to be hard. I'm trying so we can continue with this program and it all depends on how much money/sponsors we can have. We'll just have to see where we land."

Hopefully German Quiroga can continue pursuing his NASCAR dream. He is cut from a different clothe, has a personality, and races with the passion and intensity this sport needs more of. When deciding who I wanted to do a season-ending interview CWTS with, I chose him for a reason. He wants to win and will carry the truck on his back if needs be. He represents a nation and I liken him to the Sergio Perez of stock car racing.