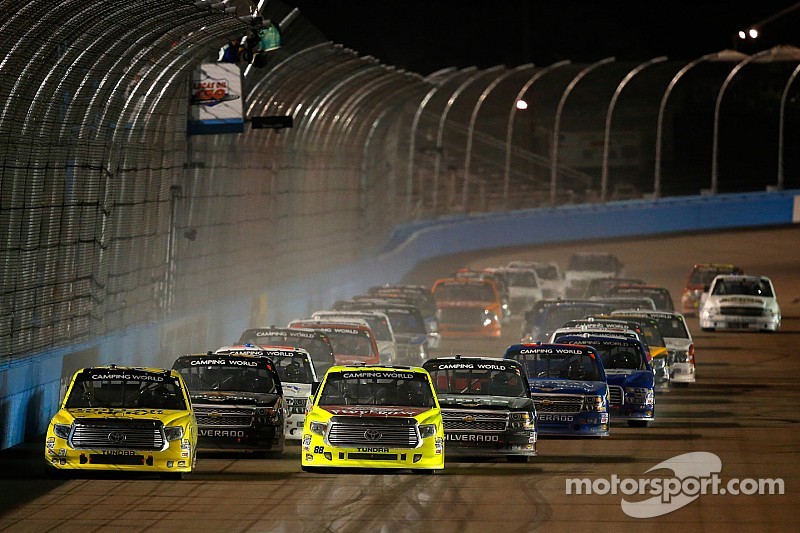 The clear class of the field, Jones led 114 of those 126 laps. Though the lights came back on after the second stoppage, NASCAR called the race because of the possibility that the power would fail again while the trucks were racing at full speed, as had just happened on Lap 124.

Jones, who won the same race last year, picked up his fourth career victory and his third of the season. Series leader Matt Crafton ran second and extended his advantage over fourth-place Ryan Blaney to 25 points.

I think that we would have been able to definitely hold him [Crafton] off. I felt like we had by far the best truck.

Crafton can become the first driver to win back-to-back Truck Series championships if he finishes 21st or better in the season finale next Friday at Homestead-Miami Speedway.

Jones, who non Thursday announced a full-time NCWTS deal with Kyle Busch Motorsports for 2015, was confident he could have kept Crafton behind him, had the race gone the full distance.

“I felt pretty confident about it,” Jones said. “I think that we would have been able to definitely hold him off. I felt like we had by far the best truck.

“He could run 10 laps pretty and maintain about five (car-lengths) back to us. Then it seemed like we could just kind drive away inch by inch at that point. I didn’t have a doubt in my mind that, if we were to go back racing for the last 20 (laps), that we would have been able to hold him off.”

Though he never led a lap, Crafton thought he could have gotten past Jones on the next restart.

“It’s a damn shame that the lights went out,” Crafton said. “I guarantee it was going to be exciting on the next restart.”

Cole Custer ran third, followed by Blaney and Ben Rhodes, who was making his fourth start in the series.

Delayed for an hour by a major power outage in Phoenix’s West Valley, the race was slowed again as soon as it started by a chain-reaction wreck that sidelined the trucks of German Quiroga, John Wes Townley and Justin Jennings—before they reached the start/finish line on the opening lap.

The race didn’t go green again until Lap 19—and not for long. Two laps later, Rhodes spun to bring out the second caution. Moments after the next restart on Lap 27, Spencer Gallagher spun underneath the Toyota of Timothy Peters, knocking Peters truck into the outside wall and collecting the Tundra of Jeb Burton.

All told, for 28 of the first 33 laps, the field circulated under yellow. The fourth caution, on Lap 39, also brought a red flag, after Joey Coulter’s Chevrolet blew a tire, slammed into the outside wall and had to be carted off the racing surface on a roll-back.

After a restart on Lap 46, however, the race settled into a rhythm, as Jones, who had led from the outside, stretched his advantage over Crafton to more than two seconds before the start of a cycle of green-flag pit stops 80 laps into the race.

The race stayed caution-free until Lap 100, when contact from John Hunter Nemechek spun Brennan Newberry’s Chevy in Turn 4. By then only six trucks remained on the lead lap, but with a free pass to Ben Kennedy and wave-arounds by Austin Dillon, Blaney, Custer and Johnny Sauter, 11 trucks restarted on the lead lap with 43 circuits left in the race.

Jones maintained his advantage until the power failed again, plunging the track into darkness as the trucks raced on Lap 124. Shortly thereafter, for safety reasons, NASCAR called the race.