Eighth straight NCWTS win for a Tundra driver at Daytona 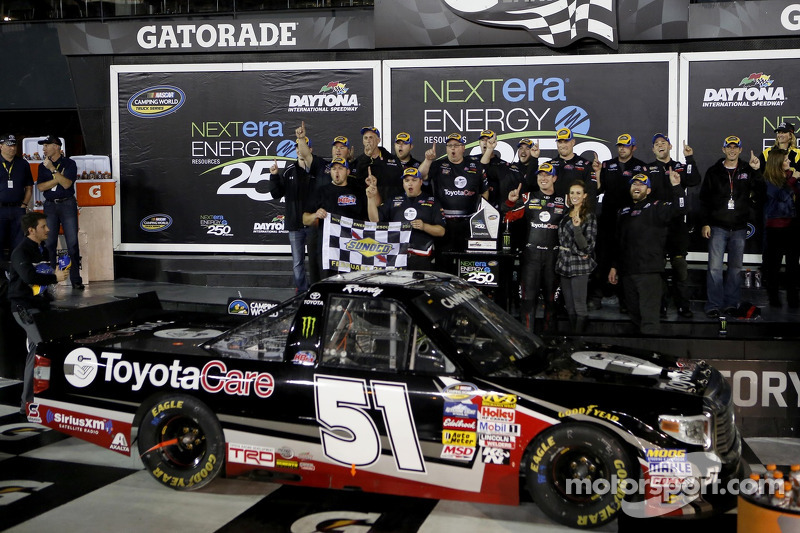 Kyle Busch led the field four times for a total of 25 laps in the Kyle Busch Motorsports (KBM) No. 51 ToyotaCare Tundra. 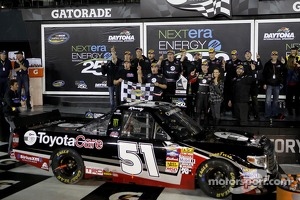 He crossed the finish line .016 seconds ahead of the second-place Tundra of Timothy Peters. It was the 30th career NCWTS win in a Tundra for Busch.

Busch becomes the first driver in track history to register wins in four different series at Daytona International Speedway. He has first-place trophies from NSCS, NNS and NCWTS races, as well as a victory at the track in the ARCA Series. Busch’s crew chief Eric Phillips is now tied atop the list for most wins by a crew chief in the NCWTS. Tonight’s victory gave Phillips his 28th NCWTS win as a crew chief, equaling the record of Rick Ren.


How does it feel to be a Daytona Truck Series winner? “It sounds awesome. I’d love to be a Daytona 500 winner, but man, first and foremost we’ve got a good buddy, our truck driver Woody is in the hospital tonight -- so we’re thinking about him. He had some issues down here in Daytona just breathing and we’re hoping he’s getting better and we’re hoping he’s coming back to drive this thing home tonight. All in all, can’t say enough about everyone at Kyle Busch Motorsports, this whole team.

Everyone from Toyota Care and TRD (Toyota Racing Development) -- building this truck and helping us and doing all the research and development with us. This is the first win for the new truck so it’s pretty exciting to see Toyota back in victory lane again here in Daytona, but also for KBM. This now makes it to where I’ve won four. I’ve won the ARCA race here. I’ve won the Truck race here. I’ve won the Nationwide and Cup -- that’s the one (Truck Series) that was eluding me. I was trying to get a Truck win here and finally got one.”

How were you able to make the move on the final lap? “I didn’t know that I had enough to get it done. Timothy (Peters) was really fast -- he could make that outside lane go. He got up to the lead there and then pulled down in front of me and the outside was still trying to get going with the 32 (Ryan Truex), but Timothy was so fast leading the top that he could get to the lead and then he was so fast leading the bottom that he could pretty much keep those guys at bay behind us.

Coming out of (turn) four I just thought, ‘Hey, I’m by myself and the 98 (Johnny Sauter) is far enough back and I think if my truck is faster than his truck then I think I can suck up on him a little bit, pull out and then see if I couldn’t get alongside of him enough to pull him back with the side draft.’

Kind of do like an old school sling shot. It didn’t really look like one, it just kind of looked like a slow motion sling shot at real speed, but it happened and got alongside of him and drug him back -- and then him and the 98 had to get nose-to-tail and we already had the momentum.”

How important is a win at Daytona in February? “It’s awesome to win here in Daytona, especially in February -- early in the season for Trucks, Nationwide, Cup, whatever it might be -- the Daytona 500 is the biggest one especially. This is an awesome feeling. I think I’m the first or maybe the only one to win ARCA, Truck, Nationwide and Cup here at Daytona. I got all four. I’ve been trying for years to get the fourth and finally got the fourth here with the trucks.”

How close was it coming to the line? “It was so close. I was trying to back up a little bit to him (Kyle Busch), but it was just like Johnny Sauter gave him a really good shove coming through (turns) three and four. Hey, a great effort by this whole Valvoline Toyota Tundra team. All these guys -- Marcus Richmond (crew chief), my old buddy is back with me and this is a great way to start off the season. You never want to be the bridesmaid when you know you went to victory lane here before, but second-place at Daytona isn’t too bad.”

How was the truck so strong on the outside lane? “Toyota, Red Horse Racing and the guys back at the fab shop, Marcus Richmond (crew chief) -- just a group effort. We come down here and I’m just a small percentage of the deal. Testament goes to those guys for building me an awesome Toyota Tundra -- a good looking Toyota Tundra on top of that. This is our year.”

What was the final lap like coming to the checkered flag? “It was pretty wild. Our Nextant Aerospace/Curb Records Toyota was pretty strong all night long. Track position seemed to be everything. I was amazed that Timothy (Peters) was so fast there on the outside lane. I just wasn’t in a position to get a run. I was committed to Kyle (Busch) no matter what. The 32 (Ryan Truex) was just enough on the outside of me and with a truck on the outside it just bogs you down and we didn’t have momentum.

Nonetheless, Toyota top-three and the streak continues -- I think that’s eight in a row (Toyota Tundra NCWTS wins at Daytona). Great night. When you come to Daytona obviously you want to win and we were fortunate enough to do it here a year ago. More importantly you want to finish the race and just proud of everybody at ThorSport -- great night and I think all three trucks stayed in one piece so that’s all you can ask for.”

What happened in the accident? “It was a pretty frustrating night for us. We had such a good MadVapes Toyota Tundra. The guys really did a great job putting together a really strong truck. I felt like we really had something for them and it looked like somebody got in the back of the 58 (Parker Kligerman) and turned him into our right rear quarter panel and turned us sideways into the wall. I don’t really think there was anywhere to go. We got stuck in the back there a long time and couldn’t go anywhere. The outside line wasn’t going so we kind of got pinned down on the inside, but when we finally got a chance to run inside the top-10 and start racing a little bit and then that happened.”