Byron on joining Hendrick: "It's really a dream come true" 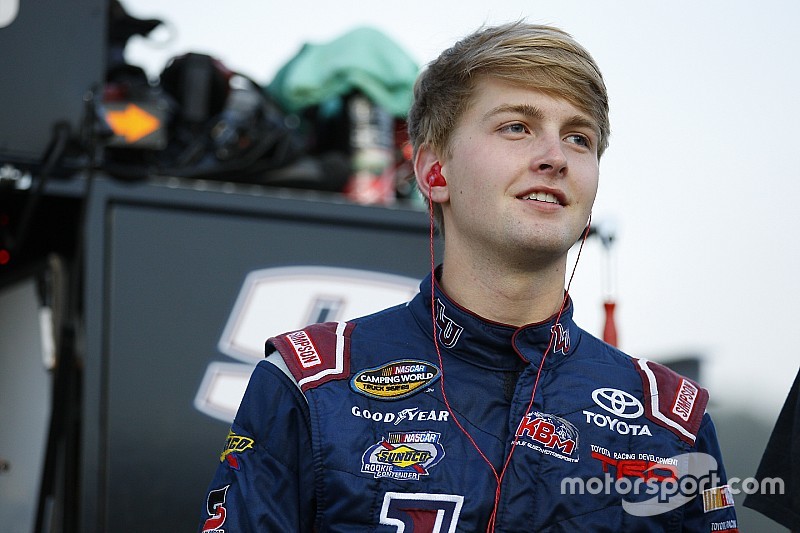 For William Byron, returning to the home team was his best option.

Byron said on SiriusXM NASCAR Radio it was a lifelong goal to join Hendrick Motorsports and JRM.

“I grew up a Jimmie Johnson fan, so it’s really a dream come true to be part of the organization and to have Mr. Hendrick’s support,” Byron said. “It’s really neat that I grew up in Charlotte, and they’re just right down the road in Concord. I’ve been to the shop a few times as a fan, and now I told Mr. Hendrick walking in there and being a part of it is really, really cool.

“I’m just really fortunate to have the opportunity. I can’t wait to get going next year in the Xfinity Series and just try to win races for those guys and make Mr. Hendrick proud.”

How it all came together

Byron said the deal came together fairly recently. His focus has remained on his day job, which, after graduating high school in May, is driving--and winning--in the Camping World Truck Series.

“Mr. Hendrick gave me a call a few weeks ago and wanted to sit down and talk about putting something together,” Byron said. “When he proposed the plan to me about what he wanted to do, I couldn’t be happier. It stuck right away.

“It really came together on Tuesday. That’s when we signed — and we had the race on Wednesday (at Bristol), so it’s been a great couple of days.”

Byron, who currently leads the truck series standings after earning a record five wins in his rookie season so far, previously raced for JRM in 2014 and 2015 as he transitioned to stock cars.

After winning the NASCAR K&N Pro Series title in a Chevy last year, Byron joined Kyle Busch Motorsports — the defending NCWTS championship team. Although he crashed in his debut last November at Phoenix, Byron has made believers out of pundits ever since. Despite an engine failure in his second start of the season, Byron climbed from 25th in the standings to first over the next eight races.

Although it appeared Byron was part of the Toyota driver development pipeline and had expected to move up the ladder, the driver was offered a different perspective once he sat down with Hendrick.

“I was amazed by him,” Byron said. “I always have been. It’s been one of those things that just made sense. I never thought an opportunity would come about like this. I didn’t know he would be open to it or have the potential to support something like that but now that it has come together, it’s something that I feel like is a great fit and something I can thrive in.

“Toyota does a great job of having a lot of young drivers. I’m proud to be one of those this year, but I can’t wait to go with JR Motorsports and Hendrick Motorsports in the future.”

An unpredictable year for Team Chevy

Certainly, it’s been an interesting year for the Chevrolet camp — and for Hendrick Motorsports, the manufacturer’s perennial juggernaut. With the announcement at the start of the season of Stewart-Haas Racing’s move to Ford, Chevy lost three champion drivers. Couple that with Jeff Gordon’s retirement followed by Dale Earnhardt Jr. being sidelined unexpectedly with concussion-like symptoms, and it was clear the talent pool was shallow.

Hendrick’s only driver to win this season is Johnson. The six-time champion, who turns 41 next month, leads the HMS contingent at 10th in the standings. Until Byron’s deal was announced, Chase Elliott was the future of HMS. Earnhardt was working on a contract extension prior to being diagnosed and remains week-to-week. Kasey Kahne, who hasn’t won in two years, has another year remaining on his contract but continues to struggle under the Hendrick banner.

Byron chose not to comment on his split with Toyota and KBM but thanked the manufacturer and team for it’s support in 2016. He's grateful to Kyle Busch for mentoring him this season and doesn’t expect his departure to have an effect on his title run.

“KBM, they’ve done a lot for me, and their biggest goal — and David Wilson (president and GM, Toyota Racing Development) and everyone at TRD is focussed on this year — is to win the championship,” Byron said. “They’re still really excited about that. They’re excited for me to have this opportunity. They’re grateful that they’ve been able to know me and have me in a Tundra this year.

“I really enjoyed it with them. It’s a good thing that we’ve built this relationship and they’re happy for me as well...I've got a great group of guys at KBM that are top-notch. They're definitely not going to do anything different there. They're going to stay focussed and hopefully win a lot more races and go for that championship. That's ultimately our goal this year and I really can't wait.”