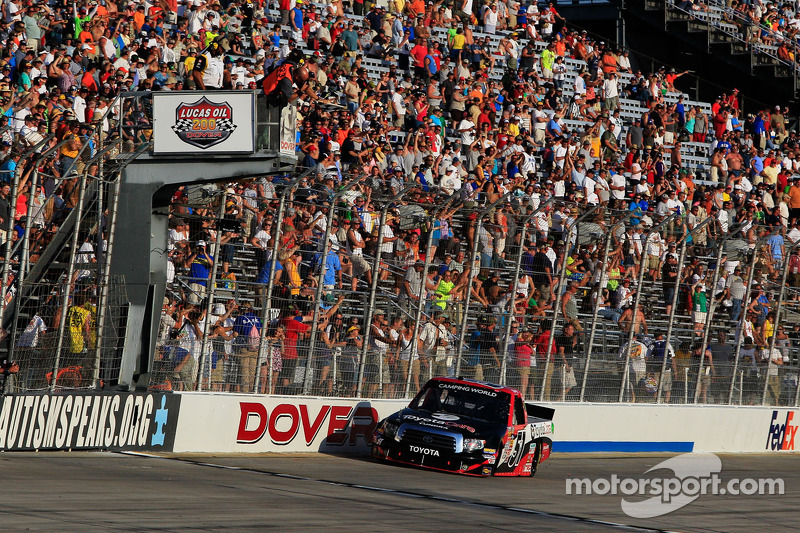 After running inside the top five for the majority of the fred's 250 at Talladega (Ala.) Superspeedway, Kyle Busch got pinched into the middle lane trying to make a move for the lead with nine laps to go and was shuffled all the way back to the 14th spot with just seven laps remaining. A four-truck accident with five to go set up a three-lap shootout, which Busch took from the 10th position. With his No. 51 Toyota Racing team still in contention for the owner's championship as the season approaches the final stages, the owner-driver knew he had to make things happen on the final restart if his team was to make up some ground on the series leading No. 88 team. 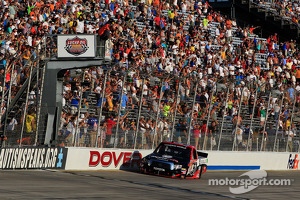 The veteran surveyed the trucks in front of him under caution and decided that his best bet was to push Dakoda Armstrong, who was just in front of him in the eighth position, to the front in the closing laps. "Tell him to keep the wheel straight and hold on," Busch communicated to his spotter.

On the ensuing restart Busch and Armstrong's trucks engaged and took to the high side of the 2.66-mile tri-oval. By the time the field took the white flag, the duo pulled even with the top four trucks, also in pairs, and the trio of tandems remained running three wide as the field came down the frontstretch. A fourth trio approached from behind and as they closed on the top six, Jeb Burton got turned up into Busch and sent him slingshotting across the field. The ToyotaCare Tundra crashed into teammate Darrell Wallace Jr. and Miguel Paludo, with the contact turning Paludo's truck onto its roof for several feet before coming back to rest on all four wheels.

Knowing each position was a valuable point, Busch kept his foot in the gas trying to make it to the finish line with his battered Tundra. After he crossed the stripe in the 10th spot, the Las Vegas native's truck went caroming hard into the end of the pit road wall and then shot back up across the track coming to rest near the outside wall. He climbed from his truck under his own power and sat down against the wall to catch his breath before safety workers arrived.

"That's what you expect in these races," Busch said after being evaluated and released from the infield care center. "It certainly was calm, cool and collected there with just the three tandems of us up front and it was probably going to finish with somebody making it to the start-finish line first -- wasn't sure who. Then I don't know what happened there with the guys inside of me. Somehow they got turned into me or hit me and then I got turned left and caused the melee, but once you see the checkered flag, you just keep your foot in it and keep trying to drive through it. Our truck was killed. It didn't have any steering, but I was still driving and obviously hit the end of pit wall which wasn't very smart, but when you're racing for points and trying to get all you can, you keep going until you see nothing."

Johnny Sauter emerged from the carnage as the winner. It was his third win of 2013 and his ninth career Truck Series victory. David Starr came home in the runner-up spot with Ross Chastain behind him in the third position. Parker Kligerman and Armstrong rounded out the top-five finishers.

Wallace Jr.'s No. 54 Camping World/Good Sam Tundra was also involved in the last-lap accident and ended up finishing 17th. Joey Coulter's No. 18 Darrell Gwynn Foundation Tundra got caught up in a lap-81 incident and finished 27th.

There were seven caution periods for 29 laps. Thirteen different drivers led a lap, exchanging the lead 29 times, including Busch who led twice for five laps. Fourteen drivers failed to finish the 94-lap event.

The No. 51 team remained second in the owner's championship standings after 18 races. The team now sits 27 points behind the series-leading No. 88 team.

The ToyotaCare Racing team will be back in action next Saturday Oct. 26 at Martinsville (Va.) Speedway for the Kroger 200. Live Television coverage on Fox Sports 1 beings at 1 p.m. ET with the NCWTS Setup Show.

Sauter out in front of last-lap wreck for Talladega win