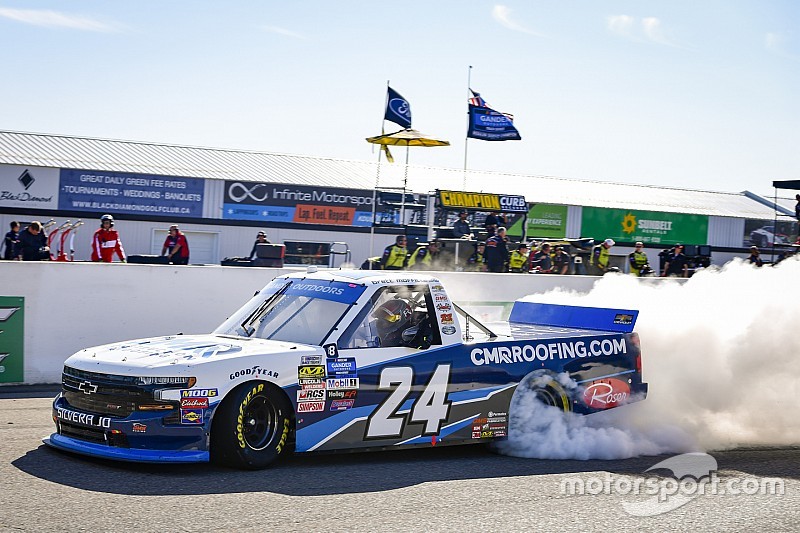 Brett Moffitt goes two-for-two in the playoffs with a victory at Canadian Tire Motorsports Park.

Moffitt is already locked into the second round of the playoffs, but further cements himself as the title favorite with his fourth win of the season.

He beat Alex Tagliani to the line by 5.1 seconds, leading an impressive 44 of 64 laps.

"I'd say we are hitting our stride at the right time," said Moffitt. "Before it was like we were missing a little bit everywhere and now we're hitting on all cylinders. So this is great."

Moffitt remains the only driver locked into the next round with Chastain in the next best positing, 28 points above the cut line. Friesen sits third, just six points up, Crafton five points to the good in fourth, Hill fifth and four points up, followed lastly by Enfinger who is just two points up.

The GMS Racing driver started from pole position and dominated the opening stage of the race, leading every lap.

The first stage went caution-free despite a couple single-truck spins by Raphael Lessard and Bobby Reuse.

Todd Gilliland ended up in the barriers while running second, setting him deep in the pack.

With just a few laps to go, Johnny Sauter ended up getting into teammate Grant Enfinger, sending him spinning in the final corner.

As they pitted prior to the stage end, Rhodes, Tagliani, Burton, Creed and Gilliland were the new top-five at the start of the second stage. Moffitt restarted back in sixth.

Dan Corcoran ended up spinning and contacting the wall, forcing the first natural caution of the race. Several drivers took the opportunity to pit with less than 10 laps to go in the stage while Chastain led a group of eight who stayed out.

Chastain would hold on for the stage win over Hill, Ankrum, Enfinger, Sauter, Crafton, Moffitt, Tagliani, Rhodes, and Burton.

Moffitt, Tagliani, Rhodes and Burton cycled to the front as the leaders pitted at the conclusion of the stage.

The final stage went completely green as Moffitt once again pulled away.

Dylan Lupton spun on the restart, spoiling a top-ten run.

In the closing laps, the battle between playoff drivers heated up as they fought for every point. Ankrum ended up getting into the back of Chastain, costing them both a couple positions.

Burton's top-five performance ended in disappointment as he lost an engine with two laps remaining. However, there was no yellow and Moffitt claimed the checkered flag for the 11th time in his career, padding his advantage over the competition in his title defense.

Tyler Dippel has been indefinitely suspended by NASCAR

Dippel has possession of a controlled substance charge dropped