Moffitt needs sponsor dollars, but can "compete for a championship" 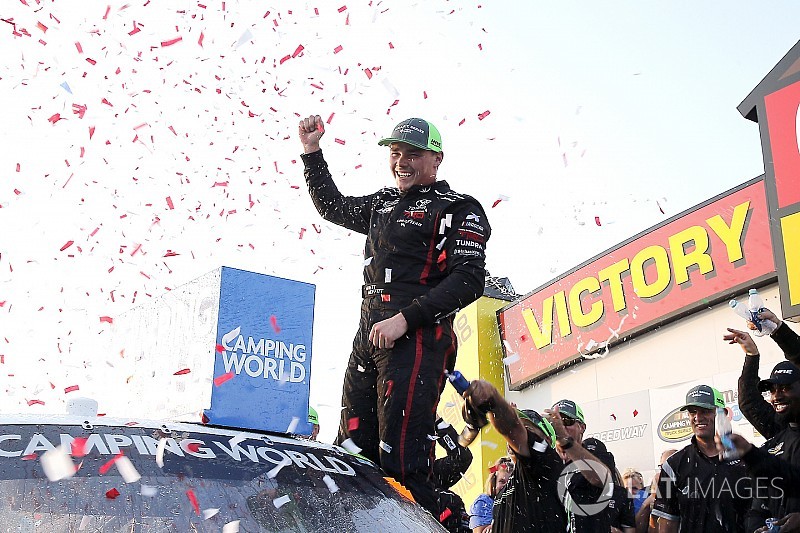 Brett Moffitt knows he drives for a small NASCAR team but he also believes it’s the best.

So far in this Camping World Truck Series season, he’s been able to make that case on the track.

Moffitt, 25, picked up his second victory of the season with Hattori Racing Enterprises on Saturday at Iowa Speedway, which are also the first two NASCAR wins for team owner Shigeaki Hattori.

Moffitt became just the second driver in the series this season to win more than one race. GMS Racing’s Johnny Sauter, the series points leader, has won four of the first nine races.

“Man, this is such a great group of guys. Everyone is so passionate and we work really hard,” Moffitt, a native of Grimes, Iowa, said. “We’re not the biggest team but we proved (Saturday) night we’re the best.

“I think we can have some more wins this season and go to Victory Lane a few more times, and more importantly compete for a championship and that’s what we need to do.”

Moffitt and HRE will need some help to make it happen.

The organization at the moment still lacks sponsorship to make it through the end of the season but appears to be set for next weekend’s race at Gateway Motorsports Park.

“We didn’t know if we were going to Texas and we are still uncertain about Chicago,” Moffitt said. “We need some more sponsors on this truck and let us run for a championship.”

Unlike most of the rest of the Truck field, HRE does not utilize the Ilmor NT1-spec engine, getting its engines from Joe Gibbs Racing and engine builder Mark Cronquist, even though many believe the spec engine has an advantage over others.

“Mark Cronquist built a great engine, the pit crew did a good job. It’s just an amazing experience being on this race team. A small team and everybody is pulling their weight in the same direction and good things are happening.”

With two wins already this season, Moffitt and HRE are in good position to contend for their first championship. The only question is whether they will be able to continue to show up at the track to do so.

“I don’t think many people know the sacrifices we’ve made this year to get to the race track as a team,” Moffitt said. “It’s been really stressful.

“To have that weight lifted and to win this race and to prove what we can do is special.”