Rhodes led the way at the start of overtime but Sheldon Creed powered his way out front to start the final lap.

Several incidents erupted on the final lap but the race remained green. As the field came off Turn 4, Cory Roper led the way but Anderson went to his inside and Rhodes to his outside, with Rhodes capturing the win by 0.036 seconds. 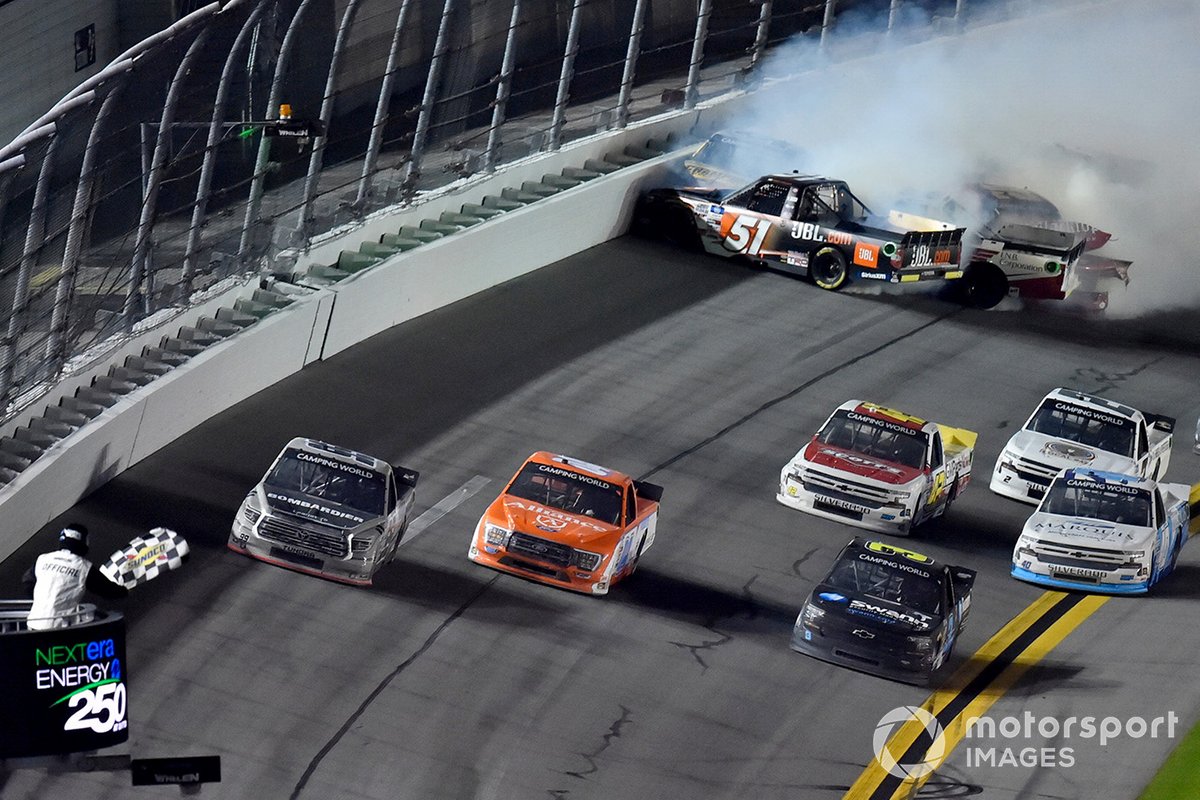 The win all-but locks Rhodes into the 2021 playoffs – a big accomplishment for his ThorSport Racing organization which switched from the Ford camp to Toyota in the offseason.

“I don’t even know how I ended up here,” Rhodes said. “I have to give such a big thank you to my team. This is so special – biggest win of my career. I can’t even believe this.

“As a driver you’re asked what your biggest accomplishment is. This is it. This is hands down it. I can’t even believe it. We came back to Toyota and we won in our first race. This is special.

“I’m going to soak this up as long as I can. That Darlington win (last season) went by so fast. You just never know when you’re going to get one again.”

The win is the fourth of Rhodes’ career and first on a superspeedway.

Roper ended up third, Ryan Truex was fourth and Carson Hocevar rounded out the top-five.

Following the break between Stages 2 and 3, most lead-lap trucks elected to pit but Grant Enfinger stayed out and inherited the lead.

On the restart on Lap 47, Enfinger was followed by Raphael Lessard, Dollar and David Gilliland.

Tyler Ankrum moved into the lead shortly after the restart. David Gilliland grabbed the top spot on Lap 48.

Caution was displayed on Lap 53 for an incident exiting Turn 4 involving Derek Kraus and Truex.

The lead-lap trucks all pit and on the restart on Lap 59, David Gilliland led the way followed by Enfinger, Todd Gilliland and Dollar.

On Lap 61 entering Turn 1, Anderson, Austin Wayne Self and Jason White were involved in an incident that placed the race under caution.

Most of the lead-lap trucks pit under the caution but Moffitt remained on the track and inherited the lead but eventually pit. On the restart on Lap 65, Bryan Dauzat led the way followed by Chandler Smith and Ankrum.

Shortly after the restart, Todd Gilliland got into Ankrum to trigger a multi-truck accident and place the race under caution again.

The race returned to green on Lap 70 with Chandler Smith leading the way followed by Todd Gilliland, Enfinger and Rhodes.

Matt Crafton got into Todd Gilliland in Turn 2 on Lap 71 to bring out another caution. Stewart Friesen and Tate Fogleman were also collected in the incident.

The race returned to green on Lap 79 with Smith still out front. He was followed by Enfinger, Timothy Peters and Austin Hill.

Enfinger got a nose out ahead of Smith to grab the lead at the line at the start of Lap 80.

On Lap 81, Hailie Deegan spun and wrecked on the backstretch to bring out a caution. Smith had reclaimed the lead before the caution was displayed.

Smith led the way on the restart on Lap 86 followed by Peters, Dollar and Rhodes.

Peters quickly powered into the lead and Rhodes grabbed the top spot from him on Lap 87.

Peters caught Rhodes at the line to lead Lap 88. Smith, with a shove from Rhodes, moved back into the lead on Lap 91.

Enfinger got a shove into the lead on Lap 94.

Smith spun on Lap 95 and shortly thereafter Peters got into Dollar to trigger a bigger wreck on the backstretch.

Also collected in the incident were Ankrum, Johnny Sauter, Nemechek and Austin Hill. After an extensive clean-up the race went into overtime with Rhodes leading the way.

Nemechek passed Rhodes on the outside on the final lap and came away with the Stage 2 win.

Sauter was third, Creed fourth and Rhodes rounded out the top-five.

Following the break between Stages 1 and 2, all the lead-lap trucks elected to pit with Creed the first off pit road.

However, Creed was penalized for speeding on pit road during his stop and had to restart the race from the rear of the field. Matt Crafton was held a lap for pitting outside his pit box.

On the restart on Lap 27, Enfinger led the way followed by Nemechek and Lessard.

Nemechek powered to the lead on the restart but Lessard reclaimed it on Lap 28. Nemechek got back out front on Lap 29.

On Lap 35, Kraus spun in Turn 3 to bring out a caution. Several trucks elected to pit under the caution but Nemechek remained the track and in the lead when the race returned to green on Lap 39.

Rhodes powered quickly to the lead on the restart.

Lessard held off Creed at the line to take the Stage 1 victory – the first in his career.

Enfinger ended up third, Nemechek was fourth and Sauter rounded out the top-five.

Sauter started on the pole but the race almost immediately went under caution for an incident that included James Buescher, Tanner Gray, Kraus and Gus Dean.

Buescher, Gray and Dean all ended up in the garage and done for the night.

The race returned to green on Lap 6 with Sauter still in the lead.

With 10 laps remaining in the first stage, Sauter led the way followed by Enfinger and Lessard.

Lessard grabbed the lead on Lap 14 as Creed moved into second.

Ben Rhodes: "Everyone is racing a little bit dirtier" in Trucks