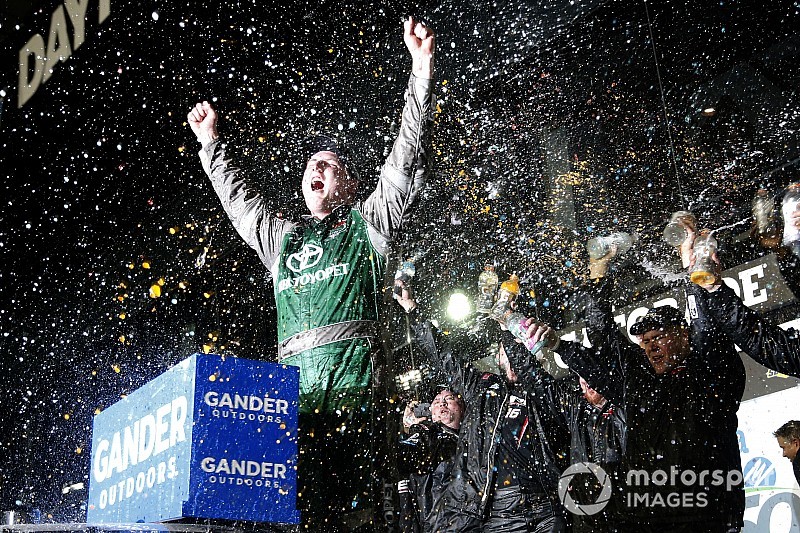 After winning the series title last year with driver Brett Moffitt, Austin Hill took over the No. 16 Toyota and powered to a victory in Friday night’s season opener at Daytona International Speedway.

On the restart of the second overtime, Hill got out to a sizable lead over Matt Crafton and Spencer Boyd. Hill managed to stay out front and held off Grant Enfinger to claim his first series win in his 52nd career start.

“Man, this truck was fast, it really was. I knew we had a truck that could compete,” Hill said in Victory Lane. “I got a little scared there at the end. I thought (Enfinger) was going to get me, he had a big run.

“I can’t believe my first win came at Daytona. It’s so surreal. I can’t wait to party with these guys.”

Hill said even though he was reminded constantly to save fuel at the end of the race, Hill said he had little confidence he had gotten the job done.

“We pitted really early and we already knew it was going to be close and then then when we went overtime, I was so scared,” he said. “I just knew I was going to run out off (Turn) 4 and not make it to the line.

“So much stuff was going through my head, but – hey – we’re in Victory Lane.”

Ross Chastain was third, Boyd was fourth and Crafton ended up fifth.

On Lap 53 of the scheduled 100, while coming off Turn 4, Jordan Anderson got into Sheldon Creed which triggered a massive accident that collected nearly a dozen trucks.

Among those who suffered extensive damage and taken out of contention were Moffitt, Johnny Sauter, Christian Eckes, Brennan Poole and Myatt Snider.

The race returned to green on Lap 63 only to return to caution one lap later when Eckes’ truck erupted in flames coming down the frontstretch. He was unhurt.

The race returned to green on Lap 70, with Hill leading the way.

On Lap 77, Cory Roper, running fourth, spun off Turn 4 after hitting Rhodes and slammed into the inside retaining wall to bring out another caution. Rhodes grabbed the lead just before the caution was displayed.

On the restart on Lap 84, Hill was out front followed by Ben Rhodes and Clay Greenfield.

With 13 to go, Rhodes got a push into the lead as Stewart Friesen moved into second and Gus Dean into third.

On Lap 89, Todd Gilliland got into his Kyle Busch Motorsports teammate, Harrison Burton, sending both into the wall off Turn 2 and brought out a caution. The race returned to green with seven laps remaining.

Clay Greenfield and Timothy Peters wrecked on the restart lap, bringing out the caution once again. The race restarted with three laps to go with Rhodes out front, followed by Hill and Dean.

With just over one lap to go, Creed got into Dean, who got knocked into leader Rhodes to trigger another big wreck and send the race into the first overtime.

Sauter held off a wild charge from Friesen to claim the victory in the second stage.

Rhodes was third, David Gilliland was fourth and Boyd was fifth.

The second stage went green on Lap 27 with Sauter leading the way followed by Enfinger and Moffitt.

Just after Moffitt took the lead on Lap 27, a three-truck wreck erupted behind him involving Ray Ciccarelli, Tyler Dippel and Chris Fontaine. Eckes also appeared to suffer some front-end damage in the incident.

The race returned to green on Lap 34 with Moffitt in the lead followed by Sauter and Creed.

On the restart, Moffitt and Creed were black-flagged for locking bumpers, which left Sauter in the lead.

Creed easily held off Hill to win the first stage of the 2019 season.

On Lap 3, Natalie Decker got a flat right-front tire after hitting debris on the track and fire erupted under her hood from a broken oil line. She quickly brought her truck down to pit road.

While the race was placed under caution, Bryan Dauzat brought his truck down pit road, the driver’s cockpit clouded with smoke. Without any brakes he ran over one of his crew member, Billy Rock, who waiting for Dauzat to stop in his stall.

“I just lost brakes when I was coming in. He jumped out in front. I told him, 'I have no brakes.' And he came out in front,” Dauzat said.

The crew member was loaded on a stretcher and transported to a local hospital for further evaluation.

During the incident, David Gilliland, Decker’s teammate, also ran over debris and suffered a flat tire. He was able to return to the race.

The race returned to green on Lap 9 with Creed leading the way, followed by Moffitt and Enfinger.

With five laps left in the first stage, Creed held a small advantage over Moffitt and followed by Eckes.

Both Burton and Robby Lyons had to start the race from the rear of the field – Burton for an engine change and Lyons for unapproved adjustments.

NASCAR Roundtable: Who will win the Daytona 500?