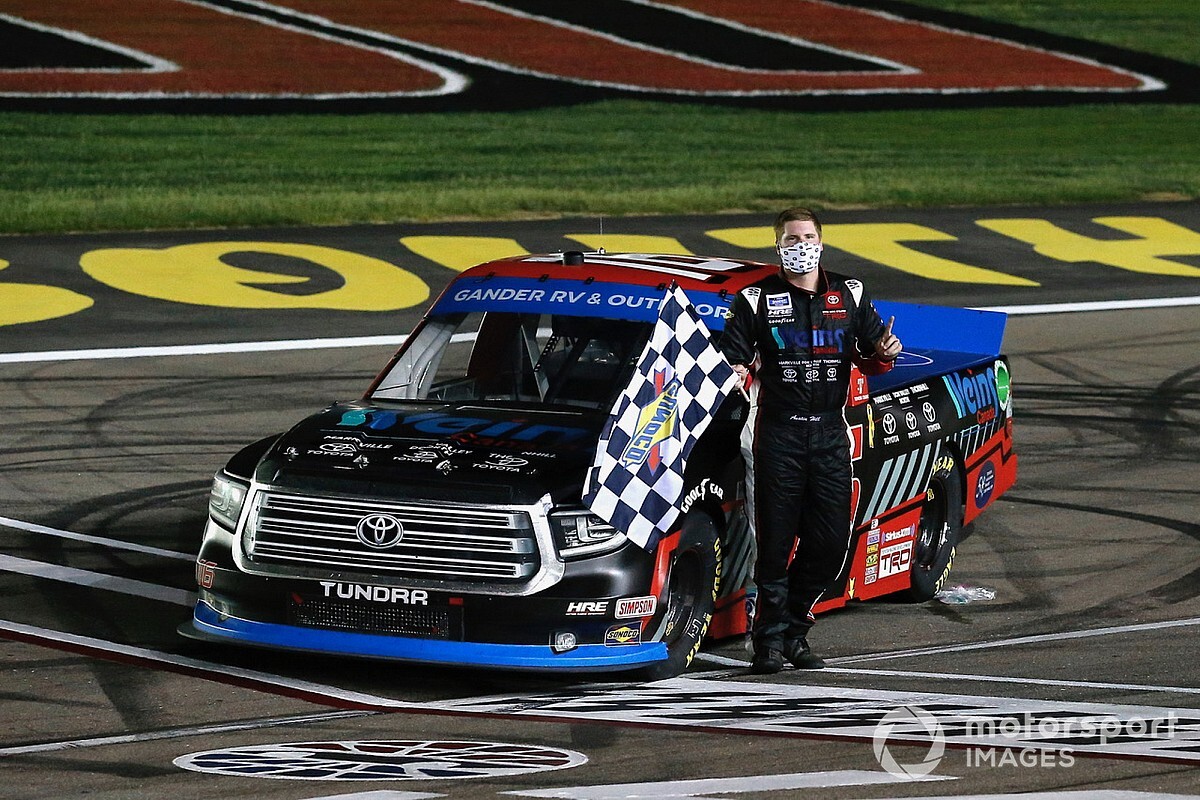 Austin Hill didn’t have the best truck Friday night at Las Vegas, but he got the best finish and locked himself into the semifinal round of the NASCAR Truck Series playoffs.

Hill grabbed the lead for the first time on a restart on Lap 96 of 134 and never looked back, masterfully dodging repeated attempts by Sheldon Creed – who led the most laps (89) in the race – from regaining the top spot.

Creed tagged the wall late while trying to catch Hill but Hill held on to win the Westgate 200 by .546 seconds.

The is Hill’s second win of the 2020 season and sixth victory of his career.

“Right after Bristol, right after they took the checkered flag, I said ‘Let’s keep our heads up. We’re going to go to Vegas and win it’ and, heck, we did it,” Hill said. “We didn’t have the best truck by no means.

“We had to fight a lot of adversity. In Stages 1 and 2 we weren’t good at all. The guys kept working on it. The pit crew did a hell of a job and I just had to go out there and get it and that’s what we did.

“Sheldon was definitely way faster than me. I was probably looking in my mirror more than I was looking out front (over the final laps). I knew he was better than we were. I knew I was going to have to protect.”

Next weekend’s race at Talladega, Ala., is the final race of the first round of the playoffs. The lowest two of the eight playoff drivers in points without a win will be eliminated from further title contention following that race.

Following the break between Stages 2 and 3, all drivers pit with Creed again the first off pit road. He continued to lead the way on the restart on Lap 68.

After a 4-wide move, Eckes emerged as the race leader at the start of Lap 69, the first time he had led in the race.

On Lap 73, Creed finally ran down Eckes to retake the lead.

Ben Rhodes spun off Turn 2 on Lap 84 after contact with Friesen to bring out a caution. The lead-lap trucks all pit and once again Creed was the first off pit road.

On the restart on Lap 90, Creed remained out front followed by Kraus and Johnny Sauter.

Jordan Anderson got stopped on the track near the exit of pit road on Lap 90 which brough the caution back out quickly.

On Lap 96, the race returned to green with Creed leading the way followed by Hill and Eckes.

Hill quickly powered to the lead on the restart as Friesen moved into second.

With 30 laps to go, Hill had built a 1.2-second lead over Creed with Friesen dropping back to third.

With 20 laps remaining, Creed had closed the gap on Hill with Friesen in third.

On Lap 124, it appeared Creed tagged the wall while trying to run down Hill for the lead but he remained in second.

With five laps to go, Creed had recovered from his brush with the wall and again began running Hill down for the lead.

Creed completed a dominating sweep of both stages, earning the Stage 2 victory by nearly 4 seconds over Zane Smith.

Moffitt was third, Kraus fourth and Rhodes rounded out the top-five.

Following the break between Stages 1 and 2, all lead-lap trucks elected to pit with Creed the first off pit road.

On the restart on Lap 38, Creed was followed by Moffitt.

With 20 laps to go in the second stage, Zane Smith and powered into the third position while Eckes cracked the top-five.

On Lap 44, Rhodes reported his No. 99 truck was “losing power” and he wasn’t sure how much longer he would be able to continue.

With 10 laps remaining in the stage, Creed continued to hold the top spot with 2.3-second lead over Moffitt. Zane Smith remained in third.

Zane Smith got around Moffitt and took over the runner-up spot with five laps left in the stage.

Creed grabbed the lead early and never looked back, cruising to the Stage 1 win over Moffitt.

Kraus was third, Enfinger fourth and Zane Smith rounded out the top-five.

Moffitt, who started on the pole, led the first lap before Creed took over the top spot on Lap 2.

On Lap 11, NASCAR displayed a competition caution to allow teams to check tire wear. Several drivers elected to pit but Creed remained on the track and in the lead on the restart on Lap 15.

With 10 laps remaining in the first stage, Creed had built a 1.1-second lead over Moffitt with Enfinger in third.

With five laps to go, Creed’s advantage had ballooned to more than 2 seconds over Moffitt.

As the truck had already cleared inspection and was gridded, she will be credited with a last-place finish.

Her Niece Motorsports team did not immediately return a request for comment. NASCAR later reported Decker was treated and released from the track’s infield care center.