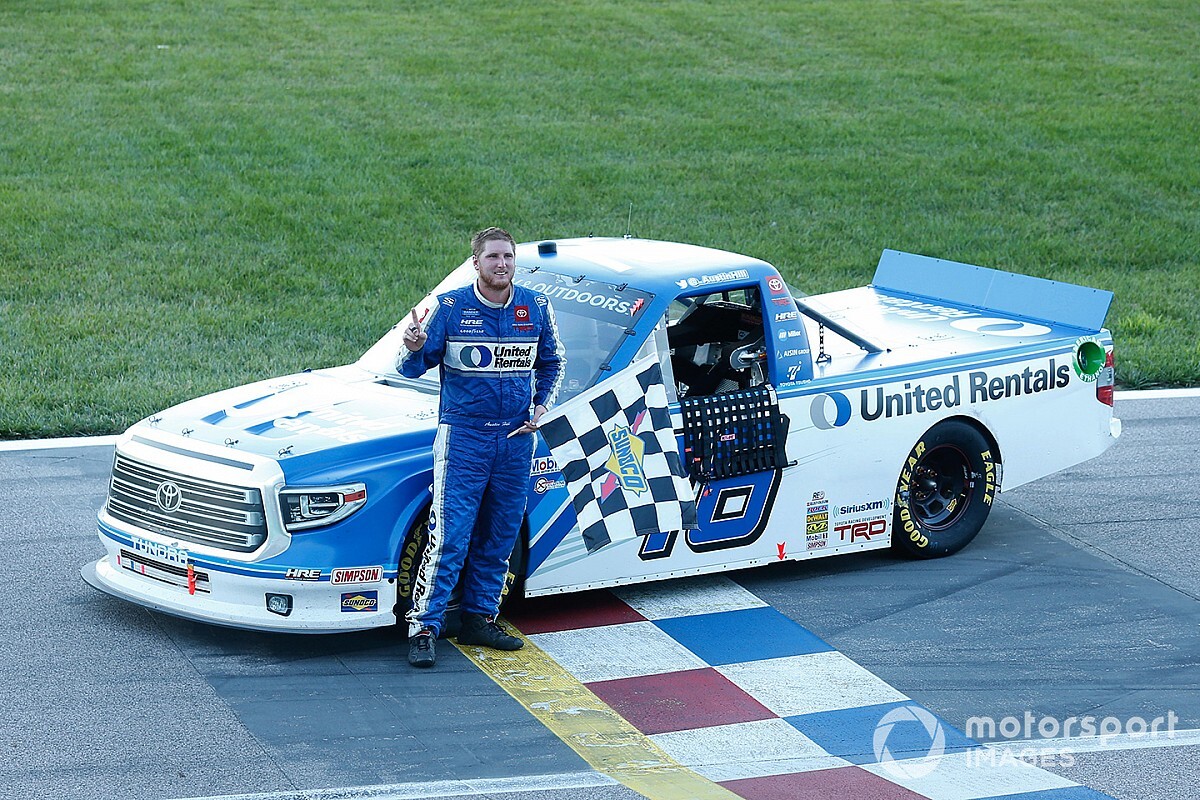 Hill, who finished 30th last week at Texas due to engine problems, returned to form Friday night, leading 65 of the 134 laps on his way to a win at Kansas Speedway, his first victory of the year.

“There we go – win No. 1!” Hill said over his team radio as he took the checkered flag.

Hill took the lead for the final time on Lap 97 and easily held off Brett Moffitt by nearly three seconds at the finish.

Hill had to temper his postrace celebration as the Trucks are running a doubleheader at Kansas this weekend, with another 200-mile race scheduled for Saturday afternoon.

“Man, it’s awesome. We’ve been working so hard and running so consistent,” Hill said. “Last week was a bummer having engine troubles. I told the guys before coming here that we finished fourth here last year – let’s go finish three spots better and I’ll be danged if we did it.

“First win of the season. That last pit stop, I tried to brake-check a little bit because I wanted to come out fourth and be on the high lane. I got tagged from behind. That was my bad and I apologize to Brett, who ended up hit me.

“Now, we have to replace the bumper to get it ready for tomorrow’s race.”

Korbin Forrister wrecked in Turn 3 on Lap 82 to bring out a caution that set up what would be the final pit stops of the race.

The lead-lap trucks all pit with Ross Chastain the first off pit road thanks to taking fuel-only. On the restart on Lap 88, Chastain was followed by Crafton, Hill, Smith and Christian Eckes.

After battling side-by-side with Crafton, Hill cleared to the lead by the start of Lap 89. On Lap 92, Moffitt powered around Hill to retake the lead as Enfinger moved to third.

Hill reclaimed the lead on Lap 97 as Enfinger moved into the second position.

With 25 laps remaining in the race, Hill had opened up a more than 2-second lead over Enfinger while Moffitt ran third.

With 11 laps to go, Moffitt was able to work his way around Enfinger and set his sights on the leader hoping to make a challenge for the win.

Hill easily held off Rhodes to take the Stage 2 win, his first stage victory of the 2020 season.

Smith was third, Ty Majeski fourth and Kraus rounded out the top-five.

Following the break between Stages 1 and 2, most lead-lap trucks pit with Creed the first off pit road.

Eckes was among those who stayed out and inherited the lead. When the race returned to green on Lap 37, he was followed by Rhodes and Raphael Lessard. Creed lined up seventh.

On Lap 41, Hill got around Eckes to take the lead for the first time in the race as Majeski moved into second.

With 15 laps remaining in the second stage, Hill had built his lead over Majeski to more than half-a-second with Smith moved to third.

On Lap 47, Smith moved into second as Majeski dropped to third. With nine laps to go in the stage, Stewart Friesen was forced to pit under green with a flat tire.

With two laps to go in the stage, Hill had built his lead to more than a second over Rhodes, who had moved into second while Smith dropped to third.

Moffitt grabbed the lead on a restart with seven laps to go and held off Hill for the Stage 1 win, his second stage victory of the 2020 season.

Chastain was third, Gilliland fourth and Crafton rounded out the top-five.

Eckes started on the pole thanks to a random draw but Moffitt quickly grabbed the lead and led the way on Lap 1.

After five laps, Gilliland had moved into second while Hill took third.

On Lap 9, Gilliland worked his way to the inside of Moffitt and took the lead for the first time. About the same time, Tyler Ankrum was forced to pit under green with a flat tire.

Robby Lyons spun out through Turns 3 and 4 on Lap 18 to bring out the first caution of the race. Several trucks elected to pit but Gilliland stayed out and in the lead.

When the race returned to green on Lap 24, Gilliland was followed by Moffitt and Hill. Moffitt quickly moved into the lead on the restart as Hill took over second and Gilliland dropped to fourth.