After Daytona win, Austin Hill "not chasing anything but wins" 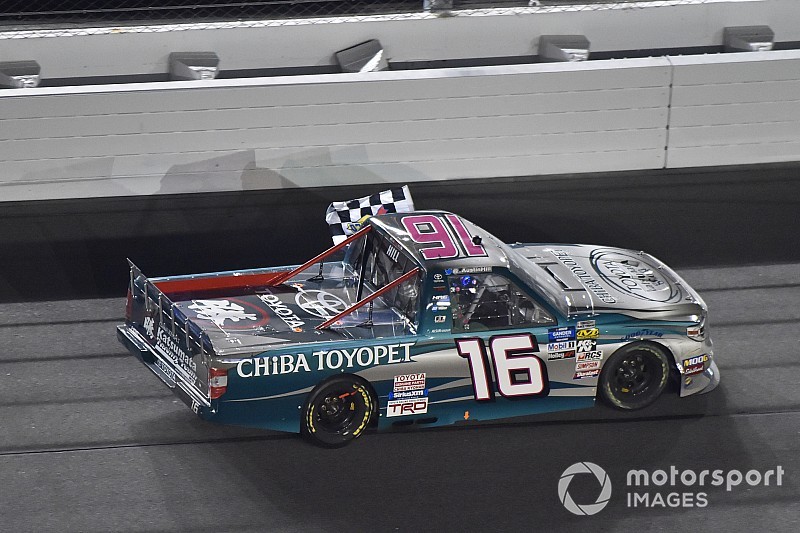 Hattori Racing Enterprises was fresh off winning the 2018 NASCAR Truck Series championship and Austin Hill didn’t want to let them down.

Hill had run just one full season in Trucks and had just one previous top-five finish when he was hired by HRE to drive its No. 16 Toyota this season, replacing Brett Moffitt, who won last season’s championship.

In one race – his victory in the Truck Series season opener at Daytona – Hill may have silenced most of the doubters while at the same time giving HRE the chance to defend its 2018 series title.

“I had a lot of people throughout the off‑season and even when I got to the race track asking if a lot of weight was on my shoulders, you know, coming into a team that won the championship,” Hill said.

“To come here and get my first win at Daytona, it’s an amazing feeling. I don’t know if it’s really set in yet completely with me. I’m so, so excited going forward with these guys. I think that there’s a lot of good things ahead of us and on the horizon.”

Hill’s crew chief, Scott Zipadelli, said he felt the organization made “a statement” with a victory right out of the box this season.

“I think it’s a good statement. We really don’t care too much what other people say, right. I try to tune all that out,” he said. “I think it's a big statement for our employees and our race team, our partners, TRD, Toyota, all of our partners from last year to this year.

“I think it’s a big statement that we are a championship‑caliber team, and we’re going to work as hard as we can to give Austin the same opportunity that we had last year. We’re pretty proud of that accomplishment.”

For Hill, 24, if he had any lingering doubts about himself or his move to HRE, they are long gone now.

“The number one goal is to win the championship, so we’re locked in now. Kind of takes a weight off of your shoulders going into Atlanta,” Hill said. “We get to go have fun now.

NASCAR Roundtable: Was successful 500 a sign of things to come?