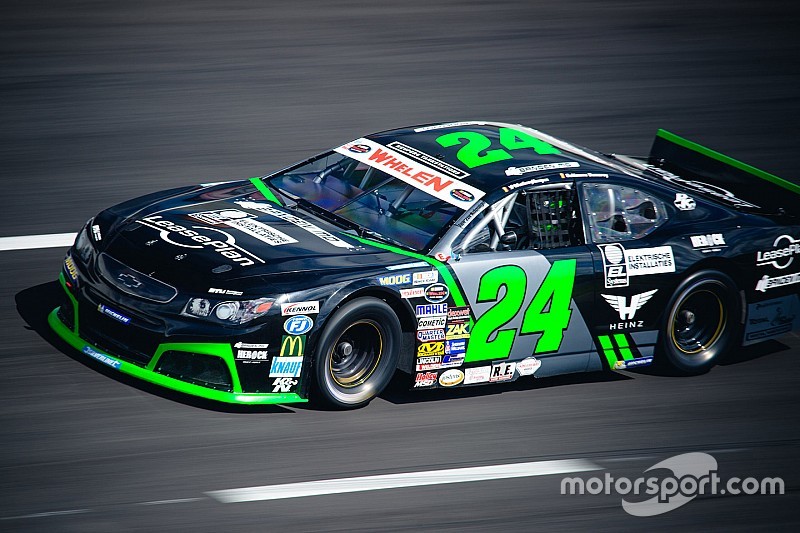 Anthony Kumpen obviously likes racing on the fast oval at Raceway Venray as he started from the pole and went on to win his second race of the season Saturday in The Netherlands.

The defending NASCAR Whelen Euro Series champion held off Borja Garcia late in the race to score the ELITE 1 Round 5 event at Raceway Venray.

Kumpen led flag to flag in his ninth career win and the third at Venray, beating the Spaniard by just .176 seconds under the checkered flag after fending off the countless attempts by Garcia to take the lead throughout the 50-lap race.

Garcia and Kumpen will swap positions in Sunday's race as Garcia will start from the pole alongside Kumpen after recording the fastest lap of the race.

“We started on the pole, led every lap and won the race," said an ecstatic Kumpen. "It’s what we came here to do so how can I be any happier!  The only thing we couldn’t do today was run the fastest lap time of the race.  It would have been nice to start on pole for tomorrow too, but that’s okay.  We’ll still start on the front row, which is what we need to do to stay in the hunt for the championship.  We may make a few small adjustments for tomorrow.”

Kumpen also spoke on how he was able to hold off numerous challenges by Garcia to take the lead.

“The high line is always fast here and the new track surface allows a driver to race in the middle of the track," added Kumpen. "Borja (Garcia) tried to pass me a few times down low but I was able to maintain my position the entire race.

“Having a good spotter at an oval track is so important, and I have a great spotter!  I trust him 100%.  We have a great relationship and great communication."

Garcia added that it was difficult to try and make a pass on the challenging track.

“It was a tough race and it’s really difficult to pass here," Garcia said. "I tried to pass Anthony a bunch of times. I made it to his door but could never complete the pass. What’s important is that I finished second and had the fastest lap of the race.  Tomorrow I’ll start on the pole and that’s really important for the championship standings.”

Alon Day came home third after overtaking his teammate Salvador Tineo Arroyo in the final 10 laps. The Spaniard won the Junior Trophy ahead of Thomas Ferrando who completed the top-5.

Marconi De Abreu beat Jerry De Weerdt for the Challenger Trophy in sixth, while Kenko Miura and Sam Taheri rounded out the top-10.