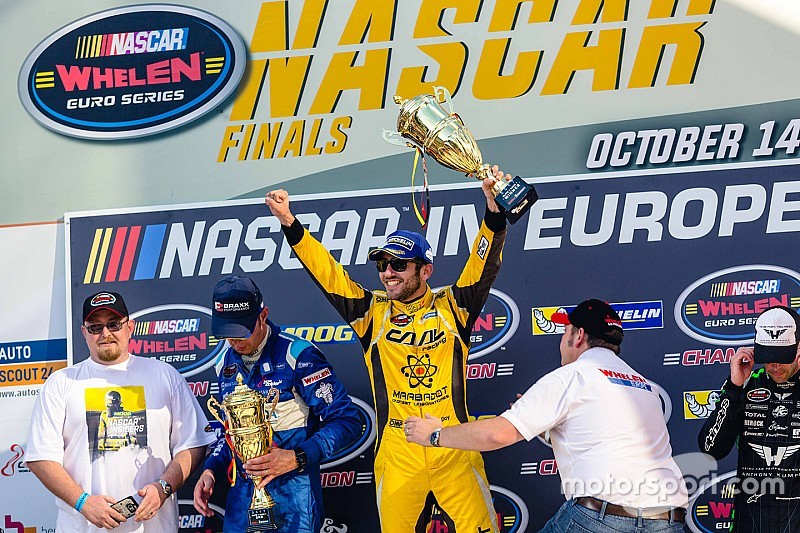 Popular European based NASCAR Series will once again hold 12 races at six tracks throughout Europe for the seventh consecutive season.

After recently finishing up a very successful 2017 campaign, the NASCAR Whelen Euro Series is ready to keep the momentum rolling for the fast-growing stock car series in next season.

The 2017 season featured more than 60 drivers representing 21 countries competing in the series this past year entertaining thousands of fans with some of the best racing in Europe. Many of those drivers and some new faces are expected to compete in 2018 and the series announced the 2018 NASCAR Whelen Euro Series schedule today. The schedule will once again feature 12 races held in six different countries: Spain, Italy, Great Britain, France, Germany and Benelux.

New to the schedule will be an international event taking place in Tours, France on June 30 and July 1. Drivers from all over the world will compete against American guest-stars in the Oval World Challenge.

After a successful American Fan Fest debut this past season at the legendary Hockenheimring in Germany, the series will return to the course with the 2018 event being the semifinals for the series.

“We are really proud to offer to European fans, teams, drivers and partners this very well-balanced calendar, a great mix between some of the most iconic names in Motorsports – Hockenheim, Brands Hatch, Valencia and Zolder – and emerging high-action short tracks such as Tours and Franciacorta,” said Whelen Euro Series President and CEO Jerome Galpin. “We all share a common vision to make every NASCAR GP a unique fan experience and provide great family fun on and around the track. In few years, the NWES events have emerged as some of the best and most attractive in Europe. Pure racing and great fun are in our DNA and we will keep pushing this way!”

Spain’s Circuit de la Comunitat Valenciana Ricardo Tormo will once again host the season opener on April 14-15 with the fourth edition of the Valencia NASCAR Fest, an event that has quickly become a classic in the NWES calendar.

On May 19-20 the Euro NASCAR will head to Brescia for the second event of the season at the Autodromo di Franciacorta, while a new King Of Brands Hatch will be crowned at the historic Indy Circuit in the context of the hugely popular American SpeedFest on June 9-10. One of the most coveted events in the calendar, the British festival is the longest running NWES event and will reach the sixth edition in 2018.

In addition to the events announced at Tours, France on June 30 and July 1 and the semifinals on September 15-16 at Hockenheimring, the season finale weekend will be held on October 20-21 at Circuit Zolder in Belgium.

Here is the 2018 complete schedule: