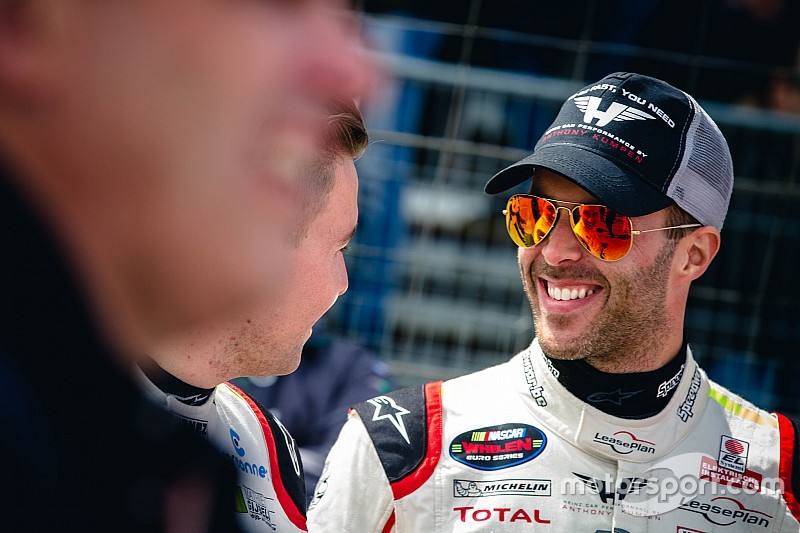 As the Monster Energy NASCAR Cup Series begins its playoffs this weekend, it’s not the only NASCAR series set to begin its postseason.

This NASCAR Whelen Euro Series will kick off its 2017 version of its postseason this weekend with a doubleheader at Autodromo Di Franciacorta in Italy. The 1.57-mile (2.519 km) 13-turn road course will welcome the series for the first two rounds of the playoffs this Saturday and Sunday.

The impressive field of drivers will begin practice today to prepare for the doubleheader to be held over the two days in the semifinals for this year’s champion. One driver ready for the playoffs to begin is defending champion Anthony Kumpen.

Kumpen discussed some thoughts before he begins his quest for a third NASCAR Whelen Euro Series title.

Despite going through some bad luck, Kumpen is ready for the playoffs to start.

“I feel ready yes,” said the Hasselt, Belgium native. “We had a great season so far, but had our portion of bad luck. We lost important points in Valencia. But throughout the season the speed was very good. We worked very hard towards the playoffs. It will be a very hard fight, but we know what it takes to win a title, which is a different story as just winning races. I have a lot of confidence my team will do everything we need to do.”

Borja Garcia enters as the points leader as he’s won a season-high four races and is the only driver to finish in the top 10 in all eight events so far this season.

“Obviously Garcia is the points leader and will be a strong competitor,” added Kumpen. “He had a very good season so far. But he didn't have any issues so far and it rarely happens you have a season without issues.”

Alon Day, who joined Kumpen this season as the only other driver to race in one of NASCAR’s three national series when he made his first Cup start at Sonoma in June, is someone Kumpen said will also be a contender.

“Alon was fast in most races, it will depend how regular he can be in the playoffs, bearing in mind the tracks will be very tough on tires and brakes,” Kumpen said. “But I also expect a lot from Frédéric Gabillon, he has little to lose and can take some more risks as he has to make up points.”

Despite being second in wins this season with three, Kumpen feels he’s left some more wins on the table during the regular season.

“Valencia I should have won at least one race and Brands Hatch, the second race was also possible to win, but we were not in control of what happened around us,” he said. “But for the rest we were really strong. We led the most laps this season, we have most poles, that shows we are where we need to be.

“There is always room to improve. It always comes down to details and that's what we focused on now towards the playoffs. Besides in Hockenheim we tried some changes in set-up for the Sunday race, so we could get more speed out of the car on tires with more mileage. That was a good step, I'm sure this will help us in Italy and Belgium to be faster on Sunday.”

As usual with all the races in the NWES, the competition is very close and many obstacles come into play for Kumpen and many of the other drivers.

“It's close racing what we are doing and sometimes you get into a wreck while you were doing a good race,” Kumpen said. “So the main thing will be to avoid getting into these situations.”

The veteran also noted how the series has grown since he first competed in the series in 2014 and how much harder it is to win a race – much less a championship.

“I started racing in the series in 2014 and so far in three previous seasons I’ve won two championships,” said Kumpen. “But if you compare 2017 to 2014 it's already a big difference. Our cars improved from a technical point of view. The teams are a lot more professional as in 2014, with some good renowned teams from other championships coming in every year. The level of drivers is higher, with a mix of talented young drivers and renowned international drivers from other series.”

Kumpen also added that through the success of the Whelen-sponsored series, it’s attracted more drivers – especially ones who have a lot of experience in racing throughout Europe that will only make his series more popular with competitors and fans.

“Now we have drivers that won Le Mans 24hours such as Bouchut, high level GT and sportcar drivers such as Marc Goossens, Niki Lauda, and ex F1 drivers such as Alex Caffi, Nicola Larini and even drivers coming for some races who have been in Monster Cup Series like Bobby Labonte this past summer. There are a lot of fans attending the races. From a spectator point of view is one of the best series in Europe. So the championship has changed a lot and became one of the fastest growing series in Europe.”

While Kumpen is proud to be a part of one of the fastest growing series in NASCAR, he adds there is more potential for growth and he hopes to be a part of the growth, especially through television coverage in Europe.

“We are at a point where we either stay at this level or we grow the series to become a major championship in Europe next to Formula 1, which is still very popular over here,” said Kumpen. “From my experience, I would say in order to reach that we need to work on massive TV coverage all over Europe.

“TV coverage in Europe is not so easy as we have many countries with a lot of TV channels, but in order to grow the championship we need more TV. And a second point we need to work on is prize money for teams and drivers. The more attractive we get this package, the better drivers and teams the championship will attract.”

After the semifinals this weekend, the series will hold its 2017 finals doubleheader next month at Circuit Zolder in Heusden-Zolder, Belgium.

Nicola Larini to compete in Whelen Euro Series at Franciacorta