Marconi Abreu shares his enthusiasm for NASCAR racing in Europe 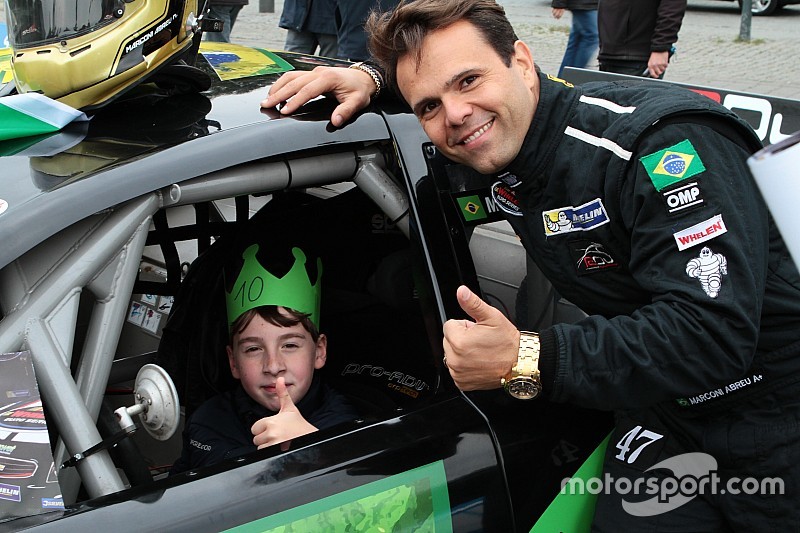 Brazilian driver Marconi Abreu might be one of the most passionate drivers in the NASCAR Whelen Euro Series today.

The 36-year-old Belo Horizonte, Brazil native raced everything from Formula 3 to Formula 2000 cars all over North America and his native South America before he decided to compete full-time in Europe’s on NASCAR-sanctioned series in 2016.

His first season saw him place 2nd in Challenger Trophy in ELITE 1 at the end of a season-long battle with Dario Caso and Jerry De Weerdt. He was also second in the Rookie Cup in ELITE 2. His main goal for 2017 is to finish better in both divisions.

He’s a great ambassador for racing in Brazil and always makes himself available for the fans, especially with the kids. Because of this and his Latin spirit – he loves to represent his country and his fellow countrymen who didn’t have the opportunity to become racecar drivers – he’s definitely a fan favorite and you can often see him showing the cockpit of his #47 Ford Mustang to young fans he put in the car.

How long have you been racing and what was the first race you competed in and what kind of car did you drive?

My first championship in motorsport was when I was 10 years old in the Alterosa de Kart Cup held in my city. In 2005, I had my first contact with formula cars. I participated in Formula Renault Brazil 2006, Formula 2000 in Skip Barber Racing School in the USA, Stock Car Jr. Brazil, Chevrolet Montana Cup, Petrobras Brands Cup by Honda team.

How long have you been competing in the NASCAR Whelen Euro Series?

I started my career in NASCAR Whelen Euro Series in 2016 and I was runner-up in the Challenger Trophy in ELITE 1 and in the Rookie Cup in ELITE 2!

What made you decide to compete in the NWES?

I've always been in love with the NASCAR universe and had the opportunity to meet the president of NWES (a great friend today), Mr. Jerome Galpin in 2016. The professionalism and hospitality of the entire NWES organization made me feel like family. The category is in full growth and I understand that this is the path to be followed!

What makes being a part of the NWES special to you?

Powerful cars without technology require more from the drivers and make the category more exciting with a high level of competitiveness for a wonderful audience! I am a driver from Latin America and now with the responsibility of representing my country in a category with worldwide visibility, it's really special for me.

How have your fans responded to you being a part of NASCAR in Europe?

My participation in the European NASCAR took my fans closer to a common passion. In Brazil, we have the culture of F1 and this reality ended up being a distant dream. Brazil today connects to NASCAR in an intense way and we have worked hard to answer many questions from passionate fans who are interested every day more in this sport.

What or where is your favorite track on the schedule?

In the European season, we take part in various events in wonderful places. I really like the events at Valencia and Brands Hatch. Really the public gives us a big show by their turnout!!! From a technical point of view, I really like the Venray track in Holland and the need to be 200% concentrated, the proximity of the other cars and the feeling of danger, the wall, are challenging factors! I also really like to race on an oval track.

Do you have any hobbies outside of racing?

(Laughs) It is very difficult to talk about this because I am a motorcycle enthusiast. My life in Brazil is very frenetic and in free moments my biggest hobby is the karting with RBC Racing, to play simulators in the virtual cockpit in my house and I love to do CrossFit in the CrossFit Pampulha gym to improve my physical conditioning to be at my best inside the race car. I also like to have fun with my family and to play poker having a barbecue with friends! I love to go to the movies with my wife and to watch my football team playing - Atlético Mineiro!

If you weren't a race car driver, what do you think you would do instead of racing for a career?

It is not easy to think in this way because I live my life for car racing. I am also an entrepreneur and I work in several types of projects. Certainly, my favorite business is with cars!

Who has been the biggest influence in your life and/or racing career?

My biggest inspiration is my father! A person who formed me as a man prepared for the world! In the races … I really like to see good riders on the track, for example, the fantastic history of Michael Schumacher, Fernando Alonso, Valentino Rossi ... my greatest inspiration came from the greatest driver in history in my opinion: Ayrton Senna. I remember following his every step in the F1 races. I always woke up with my dad at dawn to watch the races. Unfortunately, it left us very young but planted a seed of inspiration that I bring with me to this day.

Tell me something about you that would surprise your fans?

I really love the social work that I do together with my family and friends for street dwellers and drug addicts with the goal of rescuing these people! I believe in a very brief passage through this world - the planet Earth. We are here to be better human beings. I do not care what your race, your belief, your nationality.. we all deserve respect And we are equal before God. I am a racing driver with the responsibility of giving the example and inspiration to my followers and fans and I work intensely for a life project to take not only my country but also all lovers of motorsport to believe in their lives, to have Faith and much love, so that one day everyone will reach the highest place on the podium of existence, of evolution.

Alon Day making an impact in Europe and America for NASCAR