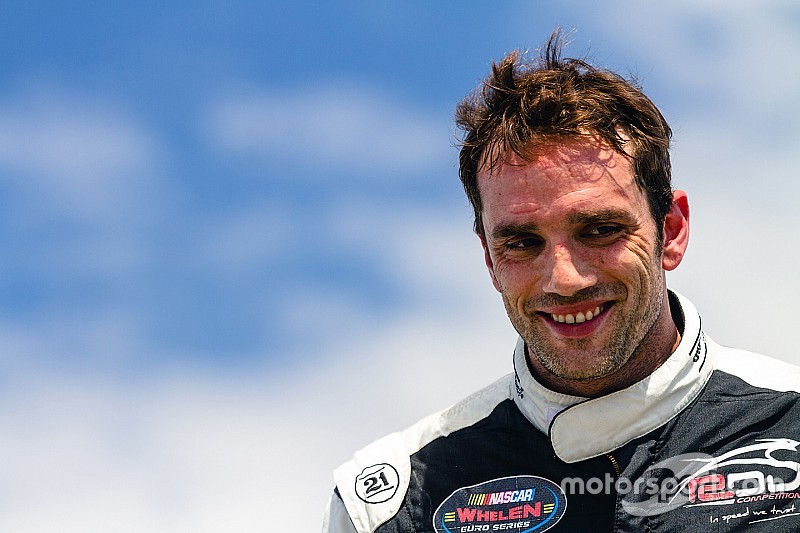 The Frenchman piloted his car around the 1.9-kilometer track and was able to bring his No. 3 Chevrolet into Victory Lane to become the third driver to win an NASCAR Whelen Euro Series Elite 1 division race this season.

Gabillon started from the pole and was quickly passed on the start by Loris Hezemans. Hezemans lead was short-lived as he jumped the restart which gave him a drive-through penalty and handed the lead back to Gabillon.

From there the Uzes, France, native was able to hold on and eventually win the race by just .284-seconds over Longin.

“It was extremely difficult to handle the car,” said Gabillon. “I was a little bit lucky to set the fastest lap yesterday, but I won’t complain. It’s always good to start out front on a track like this.

“I’m so happy being back in Victory Lane, but we have a lot of work to do this season. We have to learn why we don’t have the right pace at the moment.”

Longin finished runner-up for the second consecutive day and now has four second-place finishes in the six races held so far this season.

“It was challenging race with a very competitive Fred out front,” said Longin. “He was defending hard and made no mistakes, so I was not able to pass him here today. I still have to wait for my first Elite 1 division win, but I got a lot of points for the championship, which makes me happy.”

Alexander Graff was fourth in his first top-five of the season with Ander Vilarino rounding out the top-five. Romain Iannetta, Gianmarco, Jacques Villeneuve, Nicolo Rocca and Lasse Sorensen completed the top-10.

Lasse Sorensen passed race leader Andre Catro on the penultimate lap of the NASCAR Grand Prix UK for the Elite 2 division to sweep the weekend and earn “Prince of Brands Hatch” honors.

The Aalborg-native started from fifth on the grid and came out the winner at the end of a huge 30-lap battle involving five drivers, which delighted the huge British crowd. Soerensen passed Castro with a perfect NASCAR-style move to grab his third NASCAR Whelen Euro Series career win.

“It was amazing,” said Soerensen. “After qualifying I would have never thought about winning here two times. I thank all the mechanics, all the people at Dexwet-df1 Racing and my sponsor flexlease.nu. They made this great win possible.

“I went a bit deep on Andre, but I knew that it was my only chance. They told me before that ‘rubbing is racing’. A little bit of contact is fair and that’s what I really love about this championship.”

Castro again saw his dream of winning in Elite 2 shattered in the closing stages of the race. The American ended up second for the third time in the 2019 NWES season. After missing a gear in Druids, he couldn’t defend from the attack brought by Soerensen at Graham Hill Bend.

Advait Deodhar finished sixth for his fifth top-10 finish of the season with 2018 NASCAR Gander Outdoors Truck Series Rookie of the Year Myatt Snider seventh after consistently in the top-10 in his first time at the challenging Indy Circuit.

Nicholas Risitano crossed the finish line in eighth ahead of Alessandro Brigatti and Vittorio Ghirelli to complete the top-10.