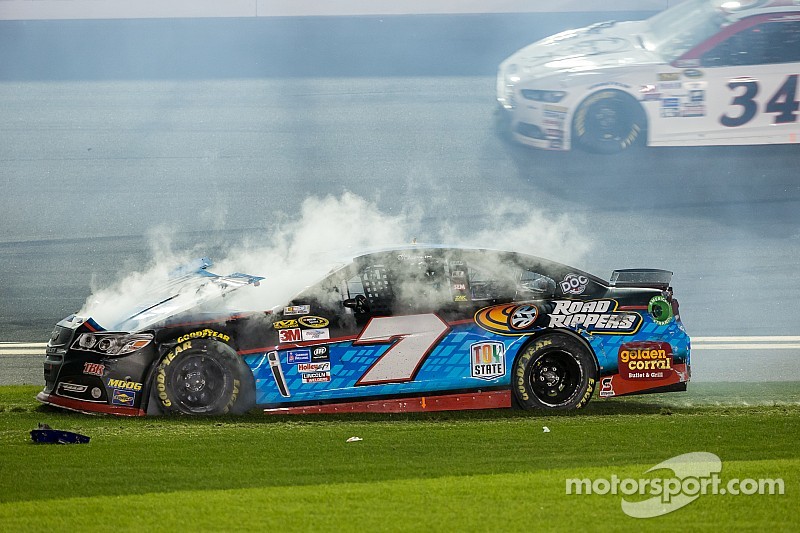 Six teams load up after disappointing outing in the Duels.

DAYTONA BEACH, Fla. – A lack of speed, points or both prevented six drivers from transferring into the Great American Race on Sunday.

Justin Marks and Ron Hornaday Jr., finished on the lead lap in the first Duel qualifying race at Daytona International Speedway on Thursday. However, their results in time trials and runs of 18th and 21st, respectively, was not strong enough to overcome a lack of points to secure positions.

In the second Duel, Josh Wise experienced electrical issues and posted just one lap before retiring to the garage in 24th-place.

Misfortune sidelined Alex Bowman and Brian Scott when the drivers were collected in other racers’ incidents. Bowman’s No. 7 Toy State Chevy was nailed after Jeb Burton made contact with Sam Hornish Jr. on the frontstretch, 36 laps into the second qualifier.

Bowman and Burton’s cars ended up in the garage and neither driver transferred into the 500.

Bowman, who drives for Tommy Baldwin Racing, blamed an earlier mistake from leaving him at the back of the pack.

“We had the fastest car I’ve ever had here,” said Bowman, who topped the speed chart during second practice on Wednesday. “It’s my own fault.  We caught the No. 11 (Denny Hamlin) there and I tried to go to the outside of him and the No. 19 (Carl Edwards) was behind me so obviously the No. 19 went with his teammate.

Burton, who was attempting to make his Sprint Cup debut with BK Racing, characterized the incident as “really disappointing”.

I caused the end of it, so I guess it's my fault.

“I wish me and the 9 (Hornish) could have gave each other a little bit more room right there coming off (turn) four and none of it probably would have happened,” Burton said. “I caused the end of it, so I guess it's my fault."

Scott was attempting to qualify for his second Daytona 500. However, after contact in the wreck triggered by Denny Hamlin and Danica Patrick, Scott was forced to pit for repairs on Lap 58. Due to pitting before pit road was open, Scott was forced to restart at the tail end of the field and finished 17th – outside of the driver that transferred into the 500.

Nick DeGroot contributed to this story

Danica takes a detour in the Duel, has words with Hamlin

Ragan, Patrick, Sorenson and others beat the odds to make Daytona 500