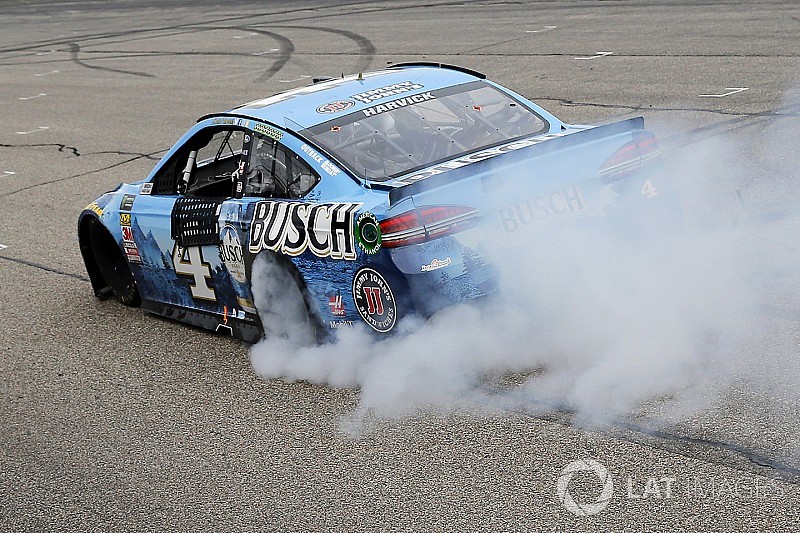 Kevin Harvick and his team have been making playoff plans ever since the Stewart-Haas Racing team won for the first time in 2018, beating Kyle Busch at Las Vegas Motor Speedway in March.

That hasn’t stopped the 42-year-old Harvick from driving as if every race was his last opportunity to qualify for NASCAR’s 16-team championship-determining field in the Monster Energy Cup Series.

Harvick won for the sixth time Sunday, pulling away from Busch after a tense late-race, multi-lap battle at New Hampshire Motor Speedway, and the half dozen victories is a career-best single-season mark for the driver of the No. 4 Ford.

With his playoff berth assured, one might think Harvick and his group would ease off the throttle and focus on the final 10-race sprint. Such thinking would be wrong.

Bonus points and playoff points are too important.

“That’s really what you’re racing for right now,” Harvick said Sunday, long after career win No. 43 was safe and secure. “A win is the way you get the most points.”

Those bonus points (five for a race win, one for a stage win) carry over throughout the playoffs and can save a team that stumbles in any one of the nine races leading up to the championship race.

“At some point it will be leaned on over the last 10 weeks,” Harvick said of the bonus points. “You look at that first (playoff) round, and you go to (Las) Vegas, hope that everything goes OK. Then you go to Richmond and (then) the (Charlotte road course) Roval.  You've seen how many cars we've crashed at the Roval so far. That's going to be survival. You never know what's going to happen.

“That first round just has a lot of unknowns. You finish where you are right now, you'll have 42 points. You're creeping in on a whole race. That's really what you're trying to guard yourself with … those playoff points.”

Through 20 races, Harvick, Busch and Martin Truex Jr. have been stacking up bonus points – Harvick now leading the way with 32 while Busch (30) and Truex aren’t far behind. The three have combined to win 15 of the season’s 20 races.

Sunday’s race marked the ninth time overall and the fourth time this year that Harvick and Busch had finished 1-2 in a Cup race. Harvick leads the “mini-series” by a 5-4 margin.

Success hasn’t stopped the No. 4 team from tweaking areas and shoring up possible weak spots. In the days leading up to the New Hampshire race, Stewart-Haas personnel made moves among the organization’s pit crews.

The biggest change for the No. 4 team was on the front end, where tire changer Shayne Pipala replaced Eric Maycroft.

Crew chief Rodney Childers said those who go over the wall to service the No. 4 on race day have been fast but haven’t been consistent.

“This week was really about matching personalities, matching the skill sets of different people,” Childers said. “We felt like we did that as a company. … We have to have people working together. They had one day to practice with each other before we came. Overall, they did a good job.”

Six races remain before the start of the playoffs and Harvick has won at five. Pocono, host of this week’s Gander Outdoors 400, is the lone holdout among the group. Harvick may be winless there, but he’s been extremely competitive. His last four finishes on the 2.5-mile layout have been fourth, second, second and fourth.

Truex, driver of the No. 78 Toyota for Furniture Row Racing, won at the unusual track earlier this year while Busch won last July. Folks expecting the “big three” not to be in the mix come Sunday likely will be disappointed.

Any concerns about retaliation for the late-race contact that saw Harvick move Busch out of the racing groove to take the lead and collect the win at New Hampshire are minimal.

“Just make it as clean as possible."