Who will be 2015 NASCAR Sprint Cup Series champion? 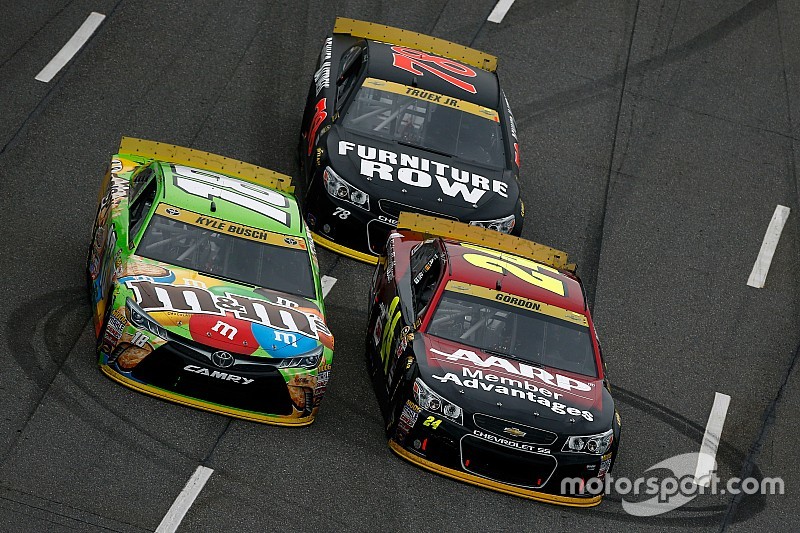 The Motorsport.com team lets head rule heart and delivers the verdict on the Homestead finale. Will it be Kevin Harvick, Kyle Busch, Jeff Gordon or Martin Truex Jr. who emerges with the title?

It shouldn’t be a surprise the fastest car will once again win the championship, says NASCAR editor Jim Utter

Regardless of everything that has transpired this season – from Kyle Busch’s injuries the day before the season opened at Daytona to Matt Kenseth’s two-race suspension for intentionally wrecking Joey Logano at Martinsville – there is actually little suspense in store for the season finale Sunday at Homestead-Miami Speedway.

That’s because even with a completely redesigned Chase for the Sprint Cup format, Kevin Harvick and his No. 4 Stewart-Haas Racing team have been by far the class of the field. Again. On his way to his first Cup championship last season, Harvick led 2,137 laps – by some considerable margin the most in the series. He won five times, including the season finale, to win the series championship in his first year driving at SHR.

Here he is again, one of four drivers eligible to win this season’s championship and the only holdover from last season. Once again, that should be no surprise. This season Harvick and the No. 4 team has led 2,248 laps – another career-best for Harvick and once again vastly superior to any other lineup in the field.

Yes, the storylines are marvelous surrounding Jeff Gordon’s final NASCAR season and Kyle Busch’s remarkable comeback from missing the first 11 races of the season. So too is the inspiring story of Martin Truex Jr., whose single-car Furniture Row Racing is putting some of NASCAR’s biggest multi-car teams to shame.

In the end, though, speed usually prevails. And this season – again – the wind is clearly in Harvick’s sails.

When the crowd toasts Jeff Gordon on Sunday night in South Beach, it will be for more than just his retirement. Gordon is going out on top.

Following a remarkable Cup career spanning more than two decades, Gordon, 44, has shown uncanny resilience this season. While Gordon’s performance has been far from flashy – he produced stronger results in 2014 – experience will pay off for the four-time champion this weekend at Homestead-Miami Speedway, just as it did at Martinsville Speedway earlier this month.

Gordon’s Martinsville victory not only revitalized the No. 24 Hendrick Motorsports team, it enabled crew chief Alan Gustafson to spend the last two weeks preparing for the final battle. HMS has won the last three races and is hitting its stride right at title time.

Yes, Gordon has used 2015 to reflect on his career – 93 wins along with losses and missed opportunities. How many championships could the California Kid have won if Ray Evernham hadn’t abandoned him, if Jimmie Johnson hadn’t been hired and if that five-letter word C-H-A-S-E had never been invented. Gordon is always quick to remind pundits he has never won a Sprint Cup.

But this isn’t the weekend to dwell on what could have happened. This is the Champion’s Round. And Gordon is ready. Not one of his fellow competitors has been in the title hunts as many times as he has. When the stress starts to mount on his opponents, Gordon will capitalize – and he won’t leave Miami disappointed.

This new Chase format was made for underdogs like Furniture Row Racing, according to news manager Nick DeGroot.

The underdog story of this Chase sits at the bottom of the totem pole in just about every category, when compared to its championship rivals. Experience, depth, information, man power ... The list goes on. But what Furniture Row Racing does not lack is ability, with crew chief Cole Pearn and driver Martin Truex Jr. at the forefront of the organization.

I'm no fool. The odds are against the little team that could, but they should be used to that by now.

Remember, people scoffed at the idea of Ryan Newman even making it to the final four in 2014 and when he accomplished that, they scoffed once more at the idea that he could be crowned champion. Well on the final lap at Homestead, it wasn't Joey Logano or Denny Hamlin breathing down Kevin Harvick's neck – it was Newman.

And Truex has performed at a much higher level than Newman’s RCR team did last season (he's actually won a race). The No. 78 was rarely seen outside the top five in points during the regular season and even held the runner-up spot for a number of races.

FRR winning the Sprint Cup title does sound like a stretch, but is it unfathomable to say that Truex could out-run Gordon, Harvick, and Busch in a single race? Not at all and that's all it takes in the new era of the Chase. Truex defeating these three on the track wouldn't be all that shocking; the fact that it would consequently earn he and his single-car team the Sprint Cup title is the part that many can't realistically conceive.

Am I grasping at straws with this pick? I really don't think so. If we've learned anything with this new format, it's to expect the unexpected and a Martin Truex Jr. championship falls right in line with that philosophy. Lastly, we all want to discuss the profoundness in seeing Gordon win the title in his final ride, but how about the poetic justice in Truex potentially taking the Cup on the same day that marks the end of Michael Waltrip Racing?

He’s often sucked in Chase campaigns after sensational regular seasons, so a first title would be great payback after an injury-ravaged 2015, says editor in chief Charles Bradley.

He shouldn’t even have made the Chase; just seven months before he did so Busch was staring down at his right leg’s bone sticking out of his racesuit; his left foot broken too after clambering out of his wrecked Xfinity car at Daytona.

But after 11 races out, a limping Busch came back stronger than ever. He scampered his way into the Chase like a relentless terrier, in just 14 races he achieved what many didn’t over 25 – and won four races along the way.

He’ll never be NASCAR’s most popular driver, but he is one of its most talented. His 33 wins at the top level are worthy of that big old trophy adorning his bulging cabinet at least once in his career.

One last handicap to overcome is his form at Homestead – it’s not a circuit he’s always thrived at: just one top 5 finish (2012) to his name, and he’s only finished on the lead lap three times in his Cup career.

But this is Kyle Busch, overcoming obstacles is what he does.

This year more than ever.

While I’d struggle to say Jeff Gordon’s been the best driver in the NASCAR Sprint Cup Series this year – heck, he probably hasn’t even been the best Hendrick driver of 2015 – there’s one strong reason to root for him. The debatable and ever-changing Chase system cost Gordon the title in 2004, ’07 and ’14; perhaps this is the year Fate pays him back with a triumphant retirement from the very top of stock car racing.

Of course, “Should he win it?” is a very different question from “Will he win it?” yet my answer's the same, and here's why. In a 43-car headrush around Homestead, a potential champ needs co-operation from fellow competitors, and of the four title contenders, I believe Gordon has the most allies… and precious few enemies.

Plucky overacheivers Martin Truex and Furniture Row Racing are well liked, yet as a single-car entity, have no one who'll actively go to bat for them. Kevin Harvick is obviously strong at Homestead, as is one of his Stewart-Haas teammates, Kurt Busch. But team co-owner Tony Stewart has been miserably anonymous all season while Danica Patrick has never had a run of consistent front-running form.

Kyle Busch has produced one of his most impressive seasons, despite the injury that cost him 11 races, and he’s one of the most talented American racers of this era. But I’m not sure Joe Gibbs Racing teammates Carl Edwards, Denny Hamlin and Matt Kenseth, hand on heart, wish to see him crowned champ.

So Gordon’s my tip for the top spot. Jimmie Johnson, Dale Earnhardt Jr. and Kasey Kahne understand the concept of teamwork, and JG and Alan Gustafson have scored a pole and a victory at Homestead together over the past three seasons, so the #24 car should have the necessary pace.

Beware a man with nothing to lose, warns editorial assistant Valentin Khorounzhiy

Reigning champion Kevin Harvick is no doubt favorite once again, with his 2014 Homestead and title win fresh in memories and with his godly 7.6 average finish at that track. By contrast, likely main rival Kyle Busch only has three top-10s in 10 starts at the track.

But the #4 team has had quite a few hiccups on its road to the final showdown this time and it's also made some enemies. Certainly, a big chunk of the field won't much care for seeing Harvick crowned again after what happened at Talladega.

Still, he's definitely a sensible bet…as is Busch and the in-form Jeff Gordon.

Martin Truex, in many ways, is not a sensible bet – he has no teammates, he has the lowest best finish in the Chase of the four contenders and he hasn't finished ahead of all three of his rivals in any given race of the playoffs.

But that's also a good place to be in. Whatever gambles Cole Pearn and the #78 team attempt, whatever strategies they go with, they'll be secure knowing that the season's already a massive success, that the pressure's off – and that nobody in the field will go out of their way to deny Truex a crown.

Truex's Homestead record is actually very good – third-best in the field – and while he probably won't dominate and lead the most laps, he's likely to be up there. And that could be enough; the #78 is very much the team you'd most expect to take advantage of any late drama.