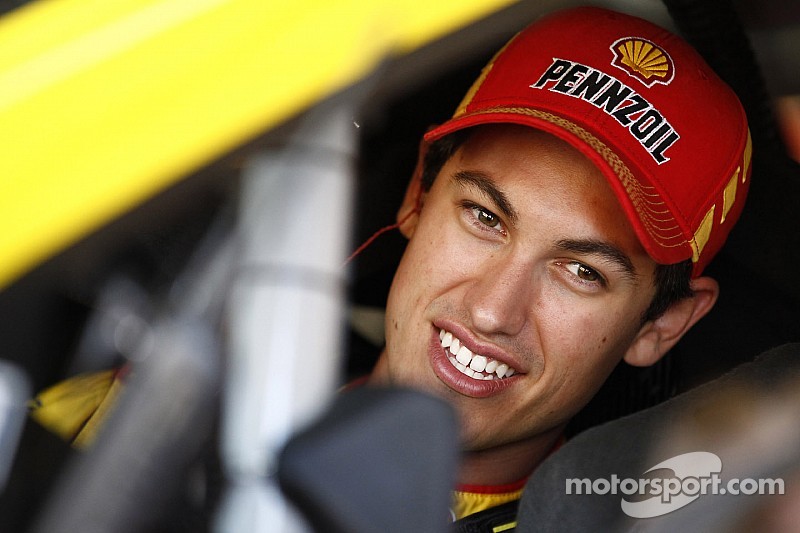 If you haven't considered Joey Logano to be a serious Chase contender, you better think again.

It doesn’t matter to the 24-year-old Team Penske racer what others perception might be, Logano believes he’s “got a really good shot” in the Chase to the Sprint Cup.

After his third win of the season, Saturday night at Bristol Motor Speedway, Logano and Roger Penske's No. 22 team’s only concern is the next 12 races to decide the championship.

I don’t care what they think of us, we’re gonna do what we’ve got to do.

So far, that’s worked to his advantage. Logano is currently a career-high fourth in the Sprint Cup point standings with only his Penske teammate Brad Keselowski and the Hendrick Motorsports duo of Jeff Gordon and Dale Earnhardt Jr. ahead of him.

“(Crew chief) Todd Gordon and myself have been working very good together and communicating a lot with our race car and we really understand what we need to race well and that’s the way we practice and it shows up when it comes game time in the race,” Logano said.

“We’re gonna keep doing that. They can think whatever they want to think, but I know inside this 22 team, this whole 22 team feels like we’re contenders to win this championship.”

And it would be ill-advised not to consider the No. 22 team challengers in the Chase.

Along with his own teammates, Sprint Cup points leader Jeff Gordon believes that Team Penske as well as Kevin Harvick, who has the benefit of Hendrick Motorsports equipment, "seem to be the teams to beat right now".

As Logano's crew chief Gordon said after their victory at Bristol, “This whole race team is definitely building momentum right now and at the right time, I believe.”

For Team Penske, that 'momentum' has been building since the season started. But the seeds were planted in 2012 during Brad Keselowski’s title run.

Penske underwent a dramatic transformation that season after the company announced a change of manufacturers in March and loss driver AJ Allmendinger three months later. During that time, they had the task of building their own Generation 6 cars for 2013 while still developing the Charger for Dodge.

As the company transitioned to Ford, Keselowski worked to recruit Logano. The pieces came together for a fresh start last year, but Team Penske faced a setback in April when both cars failed pre-race inspection at Texas Motor Speedway. Consequently, Penske lost both crew chiefs, car chiefs, engineers, director of competition Travis Geisler for two weeks -- and 25 championship points per team.

Logano recovered and made the 2013 Chase. Keselowski did not. Logano’s first run in the play-offs enabled him and the No. 22 team to streamline its’ strategy and learn how to maximize practice time at the track.

In the off-season, both teams regrouped and came back stronger for 2014.

The Penske organization adapted quicker than any other Sprint Cup club to NASCAR’s new qualifying procedures. Keselowski and Logano currently top the average starting positions – 7.0 and 8.4, respectively. The No. 2 Miller Ford has three poles and has started from the front row in nine of 24 races. Logano has one pole and has rolled off the grid from second six times.

The club’s six victories are the most Team Penske has enjoyed since Rusty Wallace piloted the No. 2 in 2004. It’s also the first time since 2011 that both Penske teams have qualified for the Chase – and that came in an era when Kurt Busch was looking for better feedback from his sophomore teammate Keselowski.

Keselowski has never had to question Logano’s contribution to the team. Nor does he underestimate his young teammate’s abilities. Keselowski believes Logano “has a tremendous shot at winning the championship”.

“We've developed a pretty good friendship, and certainly we're both hungry to be winners, though, and there's a balancing act there,” Keselowski said. “I think the results speak for themselves, and we just need to keep rolling.  We've got two teams that are legitimate contenders by really every stretch of the imagination.  I'm very proud of that.”

We've got two teams that are legitimate contenders by really every stretch of the imagination.

Logano believes that the teammates’ capacity to work together is their key to success and what differentiates them from other Cup efforts. That’s an element that has been missing from Team Penske in the past.

“We’re a two-car team out there,” Logano said. “We need to work very tight together to make it work, and I think that’s the same throughout all of Team Penske.  You see that all  the way through, but we have to make sure, and as a driver it’s our responsibility right now, to make sure we race each other right and make sure we still share our information because the moment we stop doing that and the moment we go away from each other the performance will go away.

“I think we both understand that, that if we grow apart from each other we’re not gonna be running first and second anymore, we’re gonna be racing for 15th and 16th and we don’t want that.  Brad says it all the time and I say it too, I’d much rather finish second to Brad than beat him and finish 14th.”

Logano believes that’s the philosophy the organization must maintain to persevere – particularly once the Chase begins.

“Yeah, I see ourselves racing for the championship and I see that becoming tough, but I think we’re aware of what we need to do to go fast every week…We’ve been fast at every single race track and that’s because this 22 team, and all of Team Penske, but in particular this 22 team is always looking for that next bit.

“No one is just doing their job and said I did my job and that’s enough.  They’re always looking for that extra little bit and how they can become better and how they can make our race car better and that’s what it takes, so it’s definitely the best shot I’ve ever had at winning a championship I can promise you that.  So I feel very confident going into it.”

Not Danica Patrick's night at Bristol

Ford sweeps NASCAR weekend for the first time since 2006