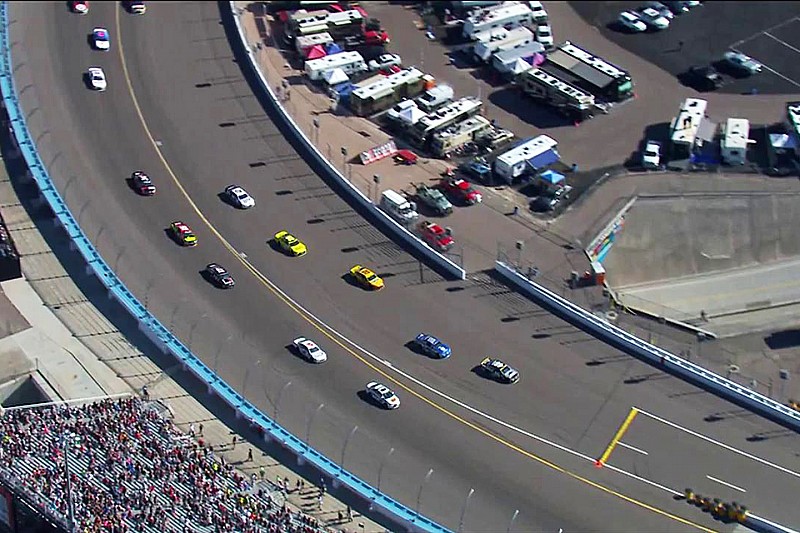 NASCAR penalized two of its top stars for pit road violation at Phoenix International Raceway before midway in Sunday’s Can-Am 500.

Martin Truex Jr. and Jimmie Johnson both passed the pace car under caution and paid heavily for their mistakes.

Truex, who started from 40th after the team failed to pass inspection prior to qualifying, had worked his way up to 10th but the second caution on Lap 83. When Truex came to pit, NASCAR cited the No. 78 Furniture Row Toyota with passing the pace car when pulling onto pit road. He was docked two laps and forced to restart 37th on Lap 91.

Truex had worked his way up to 19th — and into lucky dog position — when he collided with Ryan Newman on lap 254 while battling to maintain his position.

Jimmie Johnson had led 13 laps when he passed the pace car coming to pit road on the third caution on Lap 133. Johnson exited the pits second before NASCAR penalized the No. 48 Lowe’s team. He restarted 30th on Lap 138 but by the fourth caution on Lap 210, Johnson had advanced to 21st. When the race returned to green, Johnson ran into the back of Greg Biffle after the No. 16 ran into the back of Austin Dillon. Johnson drove immediately to the garage where the team pulled his radiator.

Jimmie Johnson returned to the track on Lap 242, 25 laps down and running 40th.

The rule in question

According to NASCAR rules, “Any vehicle illegally passing the caution vehicle or race leader will be black-flagged or repositioned at the discretion of NASCAR officials.” As for pulling up to pit: “When following the caution vehicle during a caution period, drivers must maintain their position in relation to other vehicles in the field or as otheriwise directed by NASCAR, and will not be permitted to pasture vehicles or the caution vehicle when preparing to enter pit road.”

NASCAR Sprint Cup Series director David Hoots instructed spotters to remind their drivers of the rule before the race went free on Lap 139.

Johnson remained confused after the race for the reason for his penalty.

"Guys have been pulling up like that all weekend," he said after the race. "In 15 years this has never been a concern. I've been told the last thing NASCAR has wanted to do is penalize the leader. When you pull off on to the apron, you accelerate to the commitment line.

"If you are held up by the pace car, you are disadvantaged as the leader and it allows everyone else to you and catch up. The majority of tracks we go to, you just naturally just gradually pull ahead of the pace car going to pit lane. It happens all the time.

"I'm still baffled and I don't know if I will stop being baffled. All I'll say if if they called me on it and they continue to call everyone else on it every week, then shame on me."