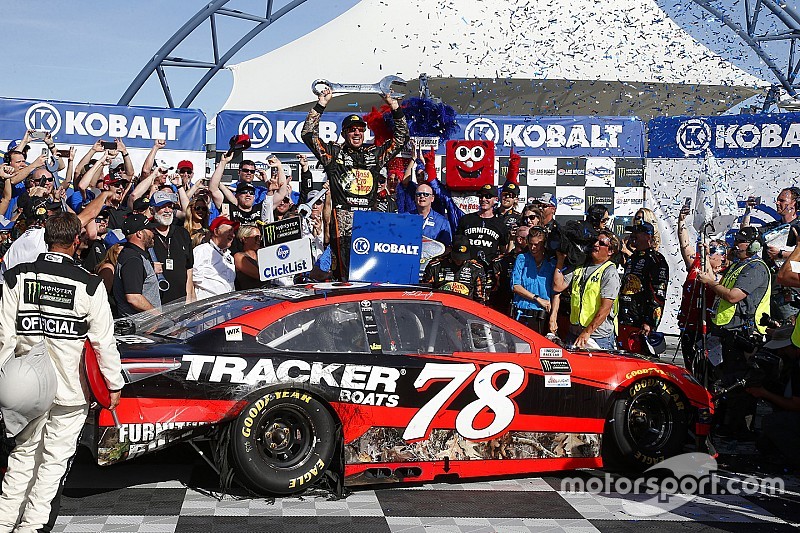 As Martin Truex Jr. said, “That’s the first time we ever got a gift, proud of you boys.”

But the best action occurred on pit road following the Kobalt 400 when Kyle Busch went to exact revenge on Logano, who he thought dumped him on the last lap. Busch went to Logano’s car on pit road and a fight ensued between the teams until NASCAR officials and track security separated the melee.

“There wasn’t much talking, there was a lot of swinging,” Logano said. "I don’t know. I was racing hard there at the end with our Pennzoil Ford. Kyle and I usually race really well together. We usually never have any issues, and he tried to pin me down into the corner underneath Brad and we about crashed on entry, and then I was still trying to gather it up by the center and I was gonna spin out, so I’m trying to chase it up and he was there.  It obviously wasn’t anything intentional, but obviously he thinks that, so, I don’t know, we’ll get by.”

When Logano was asked if any of Busch’s blows landed, he replied, “None to me."

Busch was evaluated and released from the infield care center.

“I got dumped,” Busch said. ““Flat-out just drove straight into the corner (add) and wrecked us. That’s how Joey races, so he’s going to get it.”

Truex retained the lead for the third and final stage. When the race returned to green, the No. 78 Toyota came down from the high lane and set sail with Keselowski, Elliott, Logano, Kyle Busch, Blaney, Larson, Newman, Jones and Earnhardt Jr. running in the top 10.

By Lap 172, Truex had a 1.007-second lead over Keselowski. Kurt Busch, who restarted 18th and developed electrical issues in the second stage, slapped the wall damaging his right rear quarter-panel.

On Lap 182, Landon Cassill slapped the Turn 4 wall but continued on. The race remained green.

With 75 laps remaining in the contest, Truex checked out to a 1.637-second lead over Keselowski. The No. 24 Chevy dropped to three-seconds behind the leader followed by Logano and Kyle Busch.

Kurt Busch pit on Lap 202 to start green flag pit stops. The service was extended as the team changed batteries and left-side tires on the No. 41 Ford. The team changed right-side tires and Busch returned to the track on Lap 206. He dropped from 19th and on the lead lap to 33rd, five laps down.

When Johnson finally pit on Lap 228 — with a 16-second lead over Truex — the field cycled out with the No. 78 regaining the lead on Lap 229 followed by Elliott, Keselowski, Kyle Busch and Logano.

“Give it everything you got,” crew chief Chad Knaus told Johnson, who dropped to 19th — the last car on the lead lap.

Keselowski passed Elliott for second on Lap 232. By Lap 237, Keselowski was within one-second of the No. 78 Toyota. Three laps later, Truex’s advantage was 0.632 as Keselowski closed to within eight-car lengths.

On Lap 243, Keselowski caught Truex in Turns 3 and 4 and completed the pass coming out of Turn for the lead with 23 laps remaining. Elliott, Kyle Busch and Joey Logano rounded out the top five.

With 20 laps to go, Keselowski powered out to a 0.405-second lead. Five laps later, Danica Patrick blew up entering Turn 1. Keselowski had extended his lead to 0.995-seconds over Truex. Keselowski praised the No. 2 Team Penske crew for the adjustments on the previous start prior to ducking on pit road followed by Truex, Elliott, Kyle Busch, Logano, Larson, Blaney, Hamlin, McMurray, Erik Jones, Matt Kenseth and Jimmie Johnson.

Keselowski took the outside lane and took the point at the line by 0.034-seconds over Truex followed by Kyle Busch, Elliott, Hamlin, Logano, Blaney, McMurray, Matt Kenseth and Clint Bowyer with eight laps remaining. Larson passed Busch on Lap 260 but Keselowski and Truex checked out.

With two to go, Keselowski radioed to the team, “Oh, shit, I have a flat.”

Keselowski relinquished the lead to Truex exiting Turn 2 as the field came around to the white flag. Truex led the field coming to the checkers but coming around Turn 4, Kyle Busch — with an assist from Logano spun in front of the field as a mad dash raced for the checkered flag.

Keselowski assumed the points lead by one over Kyle Larson. Kevin Harvick, who entered the weekend atop the standings finished 38th at Las Vegas and dropped to eighth.