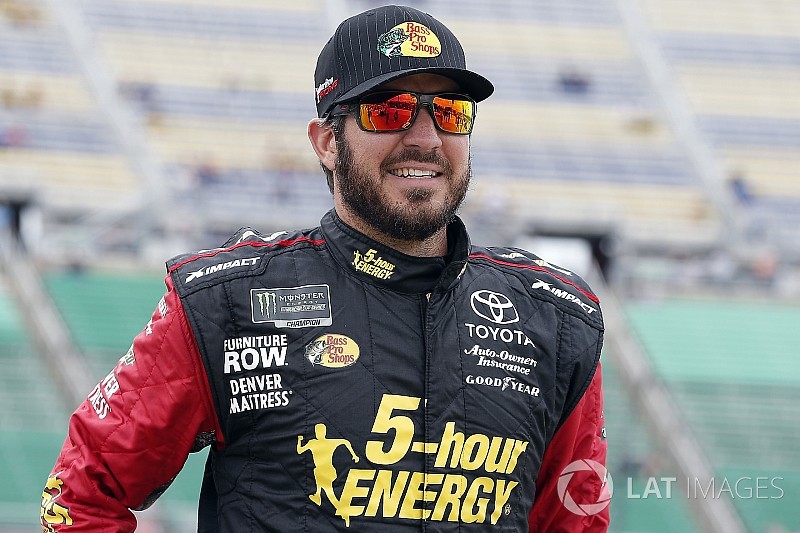 After Kevin Harvick beat him for his fifth victory of the 2018 season, Martin Truex Jr. was ready to claim the Fords have an unfair advantage but Joey Logano was having none of it.

On four newer tires on a restart with nine of 267 laps remaining, Harvick rocketed past Truex with one lap to go to win Saturday night’s Monster Energy NASCAR Cup Series race at Kansas Speedway.

At a post-race news conference Saturday night, Truex and Logano were asked how they plan to stop Harvick when the season got to the playoffs.

“I feel like the box for us is a little bit smaller, and it’s pretty evident that the Fords have an unfair advantage this year, so I’ll just throw that out there," he said with a grin.

Logano, who drives a Ford, was quick to respond.

“Boy, how the tides have turned and you don’t like it.  I remember …”

Truex added, “How does it feel?”

Said Logano, “How does it feel? Not as good as (Harvick), I can tell you that much. Oh, man, I’m still chasing a car that’s way faster than me. It used to be (Truex), now it's (Harvick) at this point.”

Truex led the series with eight wins last season and ran up a huge lead in playoff points during the regular season. He claimed his first Cup championship with a victory in the season finale at Homestead, Fla.

Still, the fact Truex – who was searching for his third consecutive win at Kansas – was in contention for the win was a victory in itself considering how he was running early in the race.

Truex struggled with handling issues on his No. 78 Toyota for the majority of the race, and finished 11th and 10th in the first two stages.

In the final stage, however, the No. 78 seemed to come to life and Truex moved into the lead on a restart with 14 laps remaining.

“We struggled a bit all weekend and we were awful at the start of the race,” Truex said. “We’re missing something right now, just can’t get the thing turned, it felt tight all night long. Like three or four to go, my car just got real tight and chattered the right-front off of Turn 4.

“I was like, ‘Oh boy, that’s not good.’ We had been so tight all night and I didn’t know where to go once he was getting there. If I go to the top, he’s just going to catch me on the bottom. I might as well run where I feel I can run the fastest, and I did and it just wasn’t enough.”

Matt Kenseth: “We obviously have some work to do"

Kyle Larson's tough night at Kansas may yet get worse