Truex is ready to tackle Texas 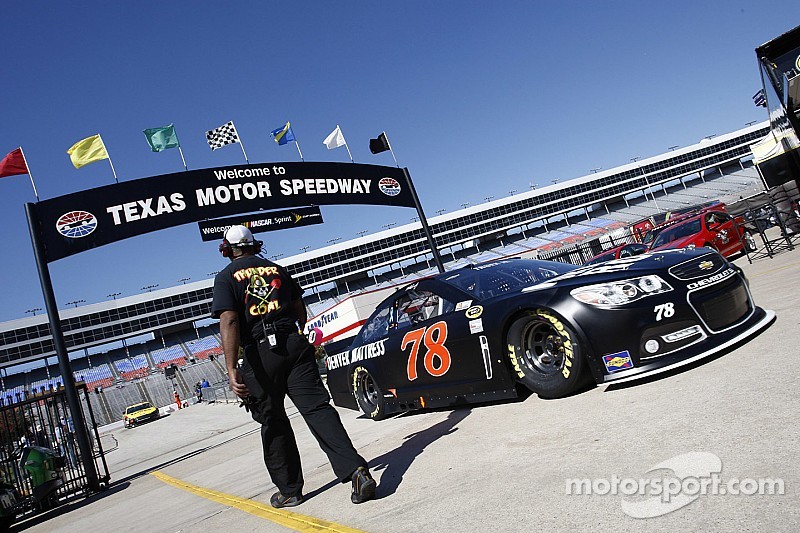 After making a driver change for 2014, the first task was to find the type of feel Martin Truex Jr. needed in the seat of the No. 78 Chevy.

While there was no magical fix, the team tested and tweaked throughout the season to develop a comfortable environment for Truex.

Crew chief Cole Pearn took over the reins last fall and continued to build on the foundation established by veteran Todd Berrier. Finally, the team started clicking and Pearn acknowledges, “It was fun again” to go to the race track.

With the addition of two new engineers recruited by Pearn, the organization continued to strengthen its fleet in the off-season and entered 2015 ready to battle.

As a single-car operation, that’s not an easy feat in NASCAR’s Sprint Cup Series. But Furniture Row Racing is proving again it’s possible.

And given the season that Martin Truex Jr. is having, 2015 is no exception.

After 10 years on NASCAR’s top tour, Truex, 34, is enjoying his most consistent season to date. His current effort quite similar to 2012 at Michael Waltrip Racing when his relationship with crew chief Chad Johnston started to jell. As the pair entered their first full season together, Truex was third in the point standings after the first six races.

Entering the seventh race of 2012 at Texas Motor Speedway, Truex earned his second pole at the 1.5-mile track. He led 69 laps in that Texas race before finishing sixth.

Fast forward to 2015. Once again, Truex is third in the point standings. He’s enjoying his first full season with Pearn and headed to Texas coming off a remarkable run of six consecutive top 10 finishes. That’s more top 10s than Truex posted for all of last year – and his longest streak since he was on a run with Johnston in the summer of 2012.

Given that we’ve already had good runs at the intermediate tracks and that Texas is one of my favorite tracks, I am feeling pumped about this weekend.

“Given that we’ve already had good runs at the intermediate tracks and that Texas is one of my favorite tracks, I am feeling pumped about this weekend,” Truex said. "The Texas track has a lot of speed, a lot of banking and the tires wear out. I enjoy all those characteristics about Texas, which has been one of my better tracks over the years.”

In 19 starts at Texas, Truex’ eight top 10 finishes is a personal best that he shares with Dover, his home track. His 231 laps led at TMS ranks third for Truex behind Kansas Speedway (251) and Atlanta Motor Speedway (247) – also high-speed intermediate tracks.

Two years ago, while driving the No. 56 MWR Toyota, Truex led a career-high 142 of 334 laps at Texas before losing the lead – and the race to Kyle Busch with 20 circuits remaining in the race.

“I nearly had the race locked at Texas, but didn't get out of the pits quickly enough and had to settle for second,” Truex said.

Three months later, MWR was implicated in a cheating scandal at Richmond and Truex inevitably lost his sponsor, NAPA, along with with his ride.

Although Truex was quickly recruited by FRR, who needed to fill the seat vacated by Kurt Busch, the transition was not as smooth as anticipated. Off the track, Truex faced a different type of challenge when his long-time girlfriend Sherry Pollex was diagnosed with Stage III ovarian cancer in August.

With the support of his team, Truex had the reassurance he needed to focus on Pollex. Team owner Barney Visser assured the driver the ride would be waiting for him while he attended to Pollex.

Before this season started, Pollex completed her IP (Intraperitoneal) chemotherapy regimen but still requires monthly maintenance. Truex acknowledged last month that “a weight has been lifted from my shoulders – and obviously off of hers.”

Clearly, with the burden lifted, Truex has found the balance he needs between his personal and private lives to persevere.

Still, a win would cure a lot of ills from last season. Truex has endured a 64-race winless drought dating back to that Sonoma Raceway win.

Truex would love to improve on his runner up finish at TMS this weekend – as would Furniture Row Racing. The last time the team visited victory lane was when Regan Smith won the 2011 Southern 500.

Although General Manager Joe Garone doesn’t wish to jinx the team’s effort, he feels the key to their early success is “working on making cars better not repairing cars and working on making the cars suit Martin’s style.”

Truex remains encouraged by the performance of the No. 78 Furniture Row Chevy team. In six races, he’s already led more laps than he did in 2014 and has a career-best average finish of 6.2.

Still, a victory could secure a spot in the Chase for Truex and allow his crew to prepare for the playoffs.

I feel our team is ready for a win, especially at the mile-and-a-half Texas track.

“We’ve accomplished plenty in the first six races, but we haven’t gotten a victory,” Truex said. “We’ve had good cars all year and I do expect the same when we unload at Texas. And what makes it even better is that we have run well at different types of tracks -- superspeedway, intermediate and a short track.

“I feel our team is ready for a win, especially at the mile-and-a-half Texas track.”