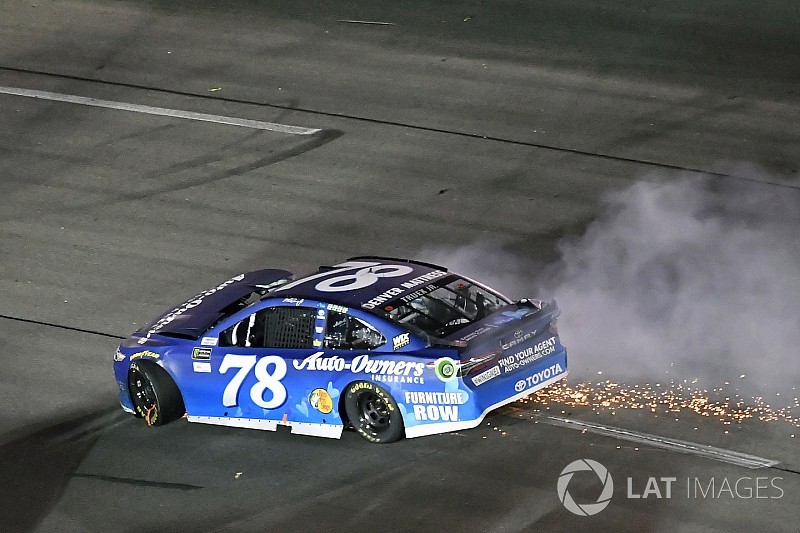 Martin Truex Jr. was three laps away from kicking off the NASCAR playoffs in dominating fashion.

A questionable caution followed by hard racing from a Toyota teammate ended with Truex slamming the wall and Kyle Larson the unexpected race winner at Richmond (Va.) Raceway.

Instead of his fifth Monster Energy NASCAR Cup Series victory of the season and five more playoff points to his already series-best total, Truex ended up 20th and none-too-happy about it.

“Tonight sucked, plain and simple, with just the way it ended up,” Truex said. “You’re out there dominating and you know your car is not very good on restarts for a couple laps. Then, a caution for a guy who shouldn’t have even been out there. It’s kind of ridiculous.”

Veteran Derrike Cope hit the wall with three of 400 laps remaining to bring out the final caution of the race and set up the two-lap overtime.

In the overtime, fellow Toyota driver Denny Hamlin got into Truex on the last lap and sent his No. 78 Furniture Row Racing Toyota into the wall.

“It made it a rough ending with Denny getting into us. We talked and I know he didn’t do it on purpose. He jumped on the brakes and got on the splitter,” Truex said. “I gave him room but he was just aggressive on the brakes.

“That stuff happens, but I’m really upset about the caution. It sucks two weeks in a row to be leading then lose it. That’s the way it goes. That’s racing, I guess. The good news is we’re fast and doing everything right.

NBC Sports Network showed video of Truex and Hamlin discussing the incident after the race on the stage area where the 16 drivers were gathered who qualified for the playoffs.

“We both drove in really, really deep. When I got on the brakes, the splitter slammed down on the ground and shot me up the track and into him,” Hamlin said. “We weren’t racing for the win or anything.

“It’s unfortunate. I didn’t want to get into him, he’s a great teammate of ours. It was a tough say. We struggled all day and got a little bit better at the end.”

He later added: "It was a miserable day actually.  They tell me I'm a hero around here.  Today I was a clown.”

Truex still enters the 10-race Cup playoffs as a favorite to reach the championship finale at Homestead-Miami Speedway, thanks to the 53 playoff points he has amassed during the regular season and will carry forward the next nine races.

“I think for us, (we need to) just focus on running as strong as we possibly can and keep the momentum going that we've had here lately. Cars have been just lightning fast and team's been doing a great job,” he said.

“We've got a few little things we've got to work on, but all in all, I feel like we're definitely one of the strongest teams, and hopefully we can just continue to perform at the level we're capable of.”

Logano comes one spot short of playoffs, but won't let loss define him