The team brought a brand-new 2014 Ford Fusion to Las Vegas, but during a practice session on Thursday the car was damaged in a pit-road incident.

Trevor Bayne and the Motorcraft/Quick Lane team bounced back from a disappointing start to the Kobalt Tools 400 weekend at Las Vegas Motor Speedway and came away with a top-20 finish.

The team brought a brand-new 2014 Ford Fusion to Las Vegas, but during a practice session on Thursday the car was damaged in a pit-road incident. Then during qualifying on Friday, the No. 21 Fusion was just 34th fastest. Sunday, however, the story was much different. By Lap 25 of 267 Bayne had driven up to 23rd position and remained in or around the top half of the field for the remainder of the race. 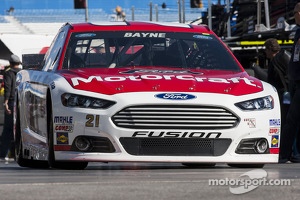 With the 400-mile race featuring long stretches of green-flag racing and just four brief caution periods, Bayne fell a lap down. Each time the team was in position to rejoin the lead lap either through a wave-around or “lucky dog” free pass, the caution flags didn’t fly their way and Bayne wound up 20th.

Still, team co-owner Len Wood was pleased with the performance of Bayne, crew chief Donnie Wingo and the rest of the Motorcraft/Quick Lane team.

“The car remained consistent all day, and we were able to stay ahead on our adjustments,” Wood said. “If the cautions had fallen our way and we’d been able to get back on the lead lap, I believe we would have had a top-15 finish because we had been outrunning a lot of those cars all day.”

Bayne said he was close to regaining the lead lap late in the race but didn’t pass the No. 47 of A.J. Allmendinger quick enough, as the caution flag was displayed before he crossed the next scoring loop after the pass, thereby making the pass unofficial.

“I was really frustrated that I didn’t try to roll the top a lap sooner to try and get by him,” Bayne said. “I was working on him, but I should have maybe gone to the top sooner.”

“That’s not a bad run for us. ….I felt like we had a 15th-place car at times and passed quite a few cars today, so I’m happy with how the car ran.”

As it was, Bayne was the fourth-best Ford, with one of his Blue Oval teammates, Brad Keselowski taking the victory and completing a weekend sweep for Keselowski and Ford.

Len Wood said it was fitting that Fords ruled the day in NASCAR, given the passing earlier on Sunday of William Clay Ford, Sr., the last grandchild of company founder Henry Ford.

“All of us with the Wood Brothers and the Motorcraft/Quick Lane team send our sincere condolences to the Ford family," Wood said.

Bayne and the Motorcraft/Quick Lane team return to the Sprint Cup circuit on April 4-6 for the Duck Commander 500 at Texas Motor Speedway.