Travor Bayne: 'Daytona 500 was definitely the race win that changed my career.' 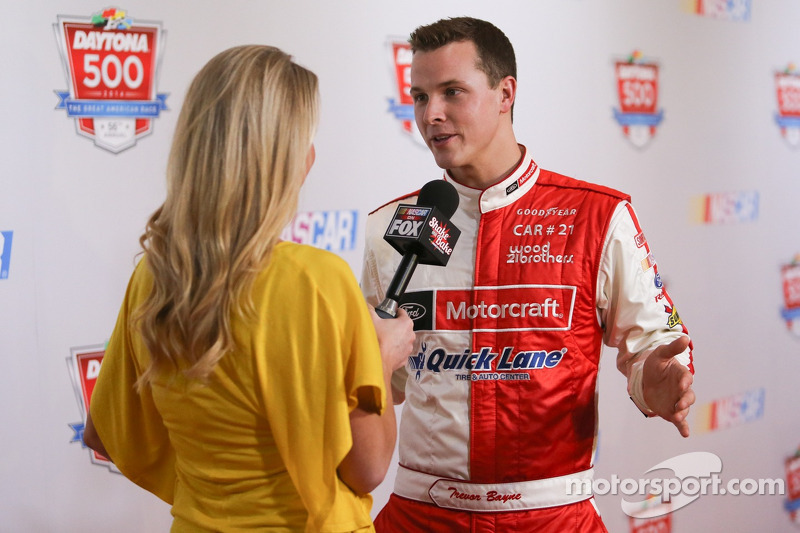 Q&A with Travor Bayne, the lone Ford driver heading into the 2014 season with a Daytona 500 trophy on his mantle.

Sometimes there isn't much drivers agree upon, but one thing that is pretty unanimous within the garage is that winning a Daytona 500 is a life and career-changing event. But for those that haven't won the Great American Race, we wanted to know what race to this point in their career had been a life-changer. Some of the answers may surprise you.

Kicking off a week long series is the lone Ford driver heading into the 2014 season with a Daytona 500 trophy on his mantle, Trevor Bayne. 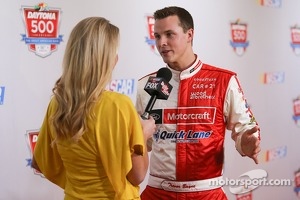 TREVOR BAYNE – CAN YOU QUANTIFY HOW WINNING THE DAYTONA 500 CHANGED YOUR LIFE? “I would say the Daytona 500 was definitely the race win that changed my career. To this point, everybody wants to see number two I guess. It kind of wears off after a little while as far as the glamour of it all.

To be a Daytona 500 champion at this point in my career is unbelievable but we are still fighting hard as if we never won it before. You want to go to the race track every year like you have to prove yourself and want to win races. The next race I would like to win would still be the Daytona 500.”

DOES HAVING WON IT ADD PRESSURE? “I don’t think we have to prove anything. People have seen that we can win races. We won last year at Iowa, but you always want to win races whether it is proving it isn’t a fluke or proving you can do this or just to win races. You don’t have to really prove anything, you just want to win. That is our desire and competitive nature.”

WHAT ABOUT A RACE OTHER THAN THE 500 THAT HAS SHAPED YOUR PATH? “Outside of the 500 another race that changed my career would have been the Hooters Pro Cup race back in 2005 at Bristol Motor Speedway when I was 15-years-old. We were leading that race with 15 laps to go and got crashed by Bobby Gill. I didn’t come in throwing my stuff or getting all mad and Pat Suhy saw me and saw that I was good on the race track and could carry myself off it. He was really interested and took me to three different teams and got me into the NASCAR pool and got me my deal with Dale Earnhardt Incorporated (DEI).

Outside of the Daytona 500 that race changed my career more than anything and maybe even more than winning the 500 because it got me into the NASCAR pool of drivers as a development driver and ultimately got me my shot with the Wood Brothers and Ford and everything else to be able to go win the 500. If you backtrack, there are races you look at and know that it helped you get to the point to even have the chance to win the Daytona 500. I think the 500 is on the biggest platform though and definitely changed the landscape of my life.”

YOU ARE THE GUY IN THE FORD STABLE OF DRIVERS WITH A DAYTONA 500 WIN, WHAT DOES THAT FEEL LIKE? – “It is humbling. These guys have done this for so long. Carl, I know it drives him crazy. He called me after the 500 in 2011 and still talks about how he finished second and how bad that feels. I feel for him. He deserves it. All these guys do. Greg Biffle is an unbelievable driver. It is crazy to think that I am the only guy. You have Brad, Joey, Marcos, Aric and Stenhouse. Those are some good names in Fords and to think that I am the only one that has been able to do that is really humbling.”

Ryan Newman: 'I had given you pretty much the same answers the last 10 years'