From the inspiring to the shocking, the 2015 season was jam-packed with moments that will be remembered for years to come.

The moments on this list don't necessarily have to be 'great,' but memorable in one way or another, either on the track or off.

With input from my Motorsport.com colleagues Lee Spencer and Jim Utter, here's our Top 10 'wow' moments from the 2015 NASCAR Sprint Cup season.

- Confrontation between Kevin Harvick and Jimmie Johnson gets physical after Chicagoland (VIDEO).

- NASCAR to change aero package for 2016 after success with low-downforce (STORY).

10.) The end of Michael Waltrip Racing

With Rob Kauffman pulling his backing of the ailing race team, Michael Waltrip Racing came to an end at the conclusion of the 2015 season. Their time in NASCAR was highlighted by some great moments, but also stained with some infamous scandals (STORY). 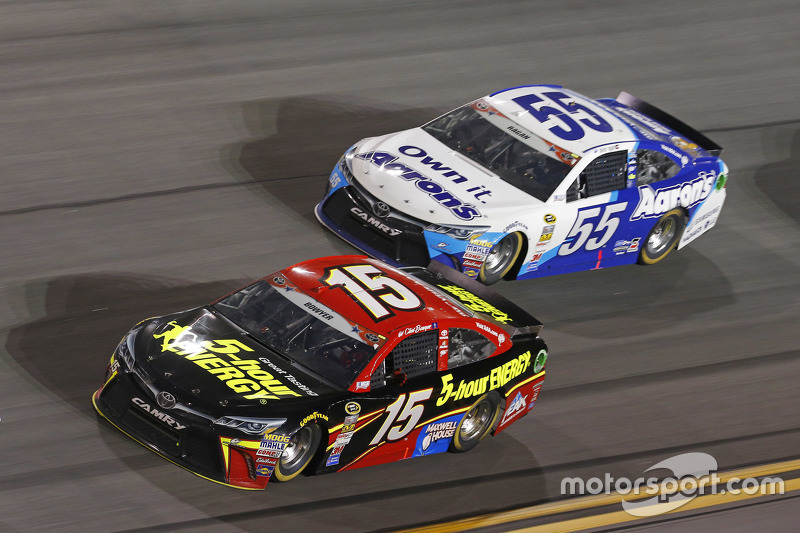 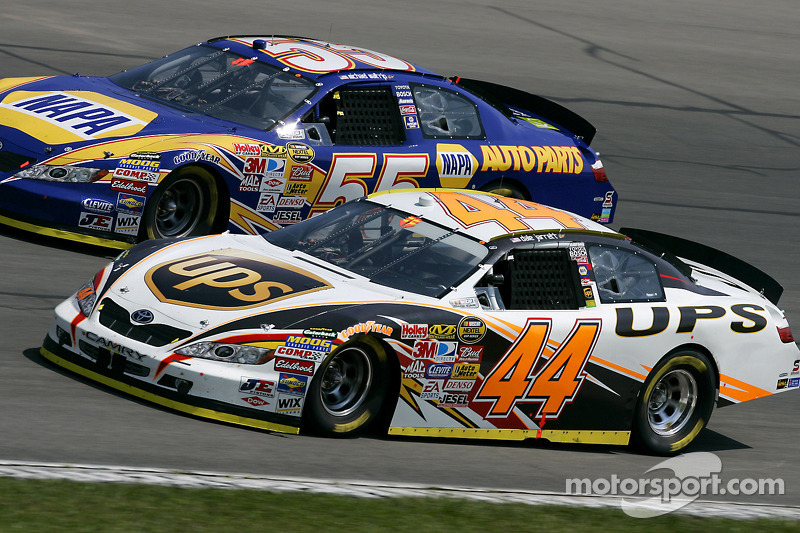 On the Friday before the Daytona 500, NASCAR made the call to suspend Kurt Busch indefinitely for domestic abuse allegations filed by his ex-girlfriend Patricia Driscoll. Some fans vandalized the window at the No. 41 garage stall and his nickname 'Outlaw' was covered in black tape. He was replaced by Regan Smith. After being reinstated, he went on to win two races and finish eighth in the championship standings. 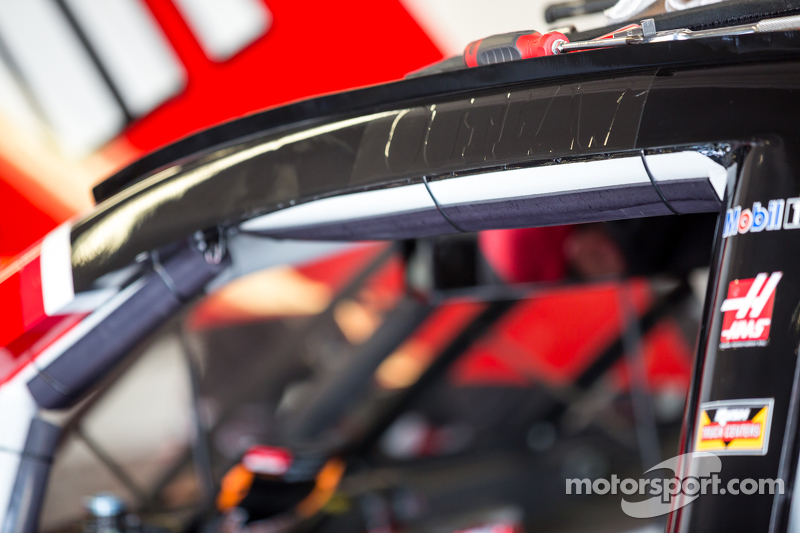 8.) NASCAR goes back in time

This past year's Southern 500 classic at Darlington Raceway was all about tradition for NASCAR. The race returned to its traditional Labor Day weekend date and roughly 30 cars ran some kind of retro, throwback paint scheme. Outside of the liveries, some drivers dressed up as the drivers they were emulating while Goodyear brought the old-school look back to their tires and NBC put legendary broadcasters Ken Squier and Ned Jarrett in the booth for a portion of the event (STORY). 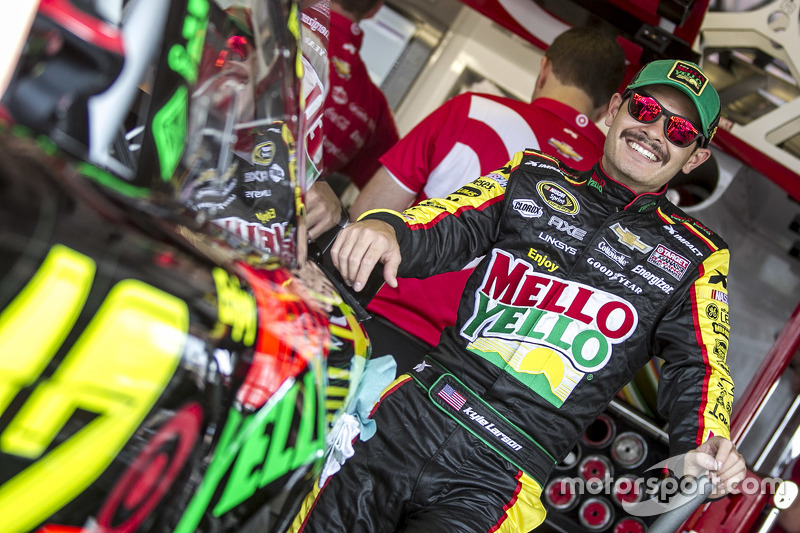 7.) Controversial ending to Chase round at Talladega

The finish of the fall Talladega race was a mess - and not the kind of mess you would expect when the checkered flag waves at Talladega. The ending of the Chase's Contender Round was shrouded in controversy. After limiting green-white-checkered attempts from three to one for that particular race, there were two attempts at giving the fans a green-flag finish, both attempts ending almost instantly with an accident. Dale Earnhardt Jr. came within inches of winning his way into the next round, but was eliminated. The outrage really began after multiple drivers who had been eliminated insinuated that an ailing Kevin Harvick deliberately caused the race-ending crash to save himself. NASCAR investigated and cleared Harvick of any wrong-doing (STORY).

A story first reported by Motorsport.com, Tony Stewart revealed plans to hang up the helmet and end his Sprint Cup career at the conclusion of the 2016 season. His departure will take place after 18 years behind the wheel of a Cup car. Clint Bowyer was named as his successor. He became the second Sprint Cup champion to announce his imminent retirement, perhaps signifying the beginning of a major transition in the stars of the sport (STORY).

Looking back on this incident now is shocking after knowing what Kyle Busch would go on to accomplish this season, but even without the trophy at the end the year, this moment alone cracks our top five. With seven laps to go, Kyle crashed head-on into a wall that was unprotected by SAFER Barrier. This directly resulted in Daytona and several other tracks reinforcing their tracks with soft walls. Kyle shattered his left foot and broke his right leg in the accident, missing the first 11 races of the year as a result (STORY).

4.) Austin Dillon flies up into catch-fencing

NASCAR's annual 4th of July 400-miler at Daytona ended in a terrifying accident earlier this year. As Dale Earnhardt Jr. took the checkered flag, there was no cheering on the race winner's radio. "Oh no! Oh my God!" yelled Earnhardt. What he saw was the No. 3 of Austin Dillon back flipping over a pack of cars and coming to dead halt as he nailed the catch-fence. After slamming back into the ground on his rood, Dillon was struck one final time. He survived the accident mostly unscathed, but several fans were injured by debris (STORY).

While fighting for the win at Kansas, Joey Logano moved Matt Kenseth out of the way after the two drivers made contact with the wall. Kenseth was sent spinning and was eliminated from the Chase as a result. This thrilling finish was the catalyst from arguably the most shocking moment this season. After sustaining significant damage in a crash at Martinsville two weeks later, Kenseth waited for Logano, who was leading the race. Once the duo found each other, Kenseth rammed Logano's car into the wall. As a result, Logano was knocked out of the Chase. An eye-for-eye was the mentality and NASCAR reacted with an unprecedented punishment - suspending Kenseth from the next two Sprint Cup races (STORY).

In one of the greatest comeback stories in all of sports, Kyle Busch was crowned the 2015 Sprint Cup champion after missing the first eleven races due to a broken leg and shattered left foot. Busch's run towards the title was a remarkable one that started in a hospital bed with the driver of the No. 18 essentially learning to walk again. Once he returned, he won four Cup races and made it inside the Top 30 in points before the conclusion of the regular season. In the Chase, he showed patience, maturity and consistency as he crept his way to the final four. And when it was time to deliver, he did with a victory and championship in the season finale. Not to be overlooked, it also marks the first Cup title for Toyota since joining the sport, a feat they've worked tirelessly to achieve (STORY). 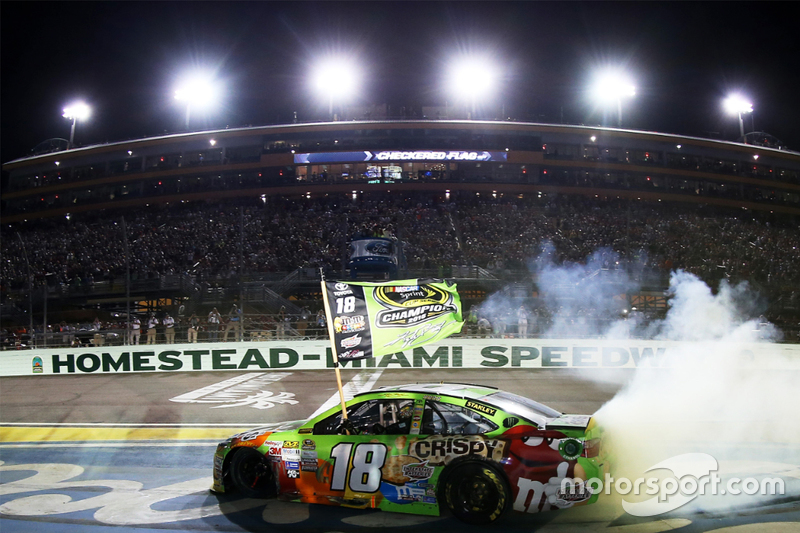 No. 1 on our list isn't a single moment, but an entire season. NASCAR icon Jeff Gordon announced that this would be his final season in the Sprint Cup Series. Every single week when he showed up to the track, he was showered with gifts and thank yous from all those in the racing community. And he did not quietly fade into the night like many feared he would after a dismal regular season, despite winning the pole for the Daytona 500.

He stepped up to the plate and tip-toed his way into the Eliminator Round of the Chase, surviving longer than any of his Hendrick Motorsports teammates. After carnage ensued and his main threats were taken out of the race, Gordon was able to take the win at Martinsville - the 93rd and final of his career. His emotions after that race were of relief and unmitigated joy as fans stuck around just to chant his name. The win also earned him a place in the title decider, giving him one last opportunity to fight for that illusive fifth championship. He was constantly engulfed by adoring fans during his final race weekend. Even Mario Andretti and Lewis Hamilton were present for his final ride. He didn't win the title, but his sixth-place finish was enough to secure him third in the points. After the checkered flag, he and team owner Rick Hendrick shared an emotional hug as the legendary driver officially hung up the helmet.

There were countless memorable moments from the 2015 season, but none quite top Jeff Gordon's final ride. A legend, a class act, and without a doubt, one of the most respected (and talented) racers of all time (STORY). 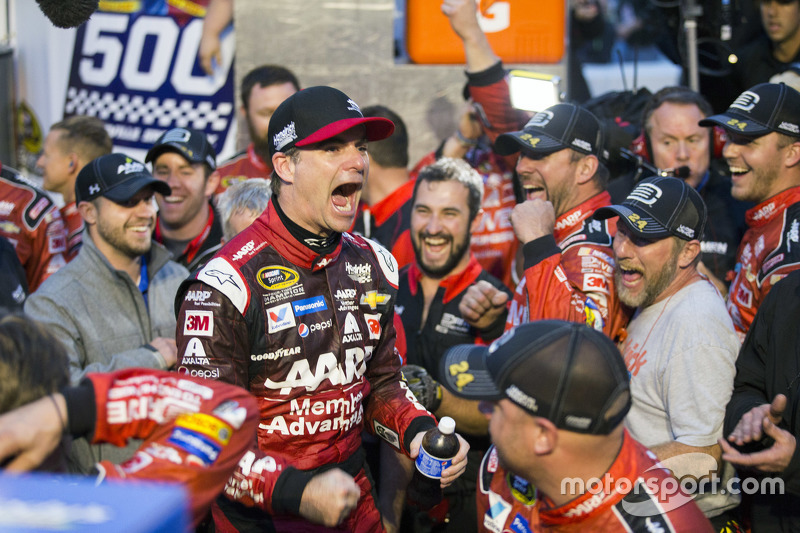 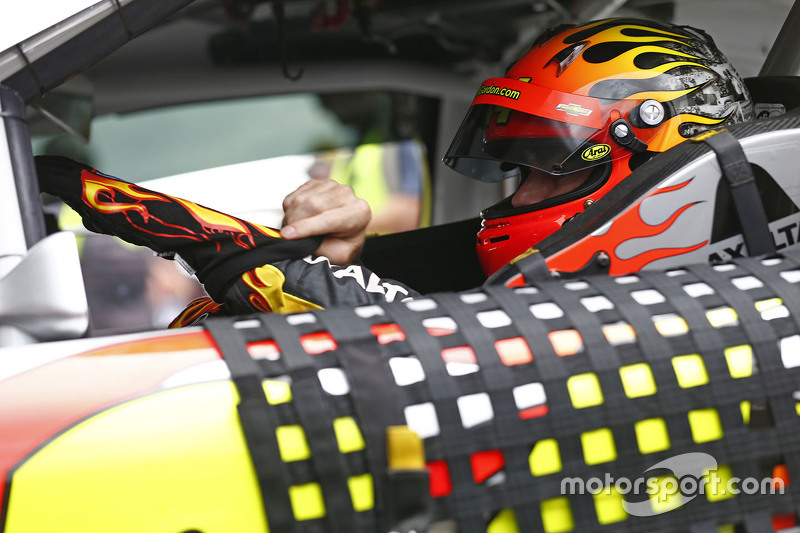 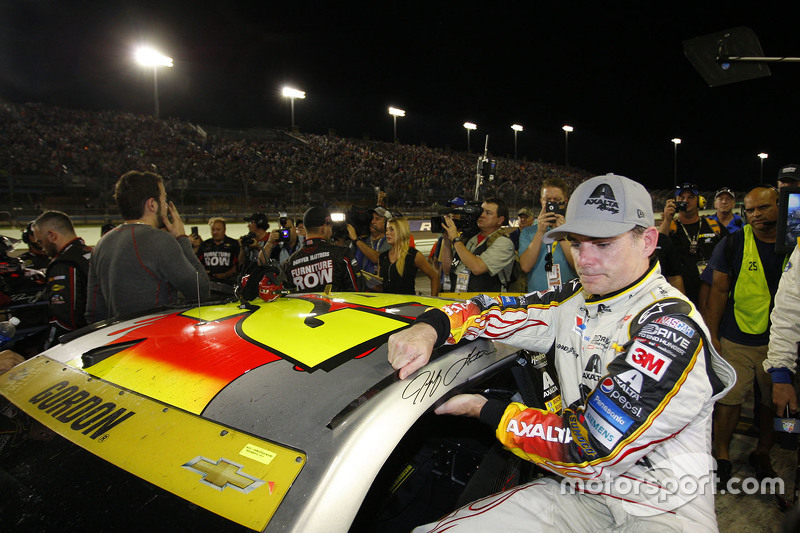 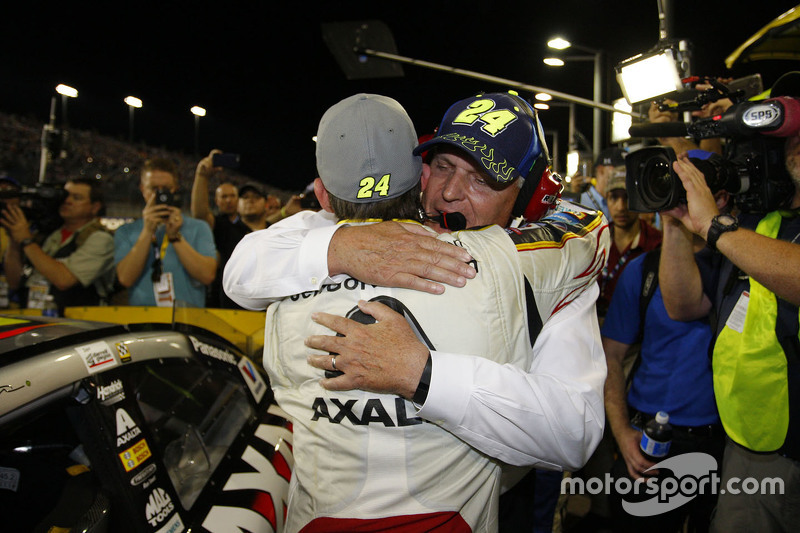 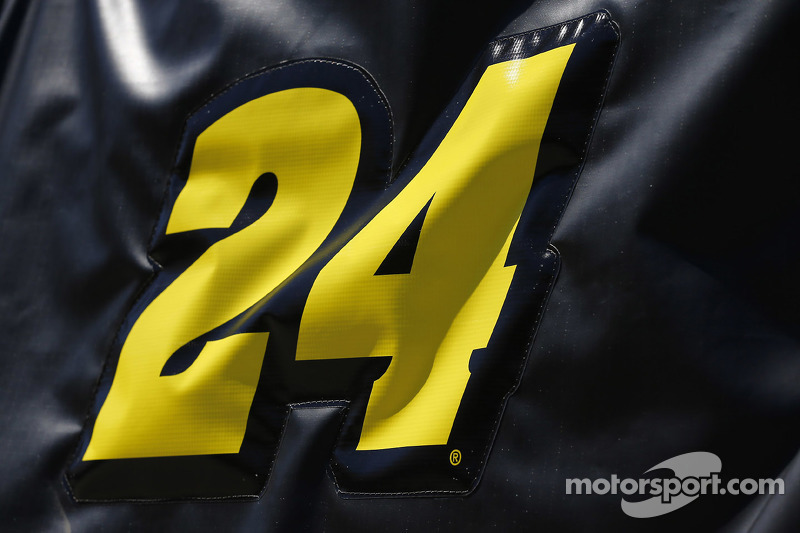 Looking back on Michael Waltrip Racing's short, but eventful existence