Tony Stewart says liking a track helps you win at it, he likes The Glen 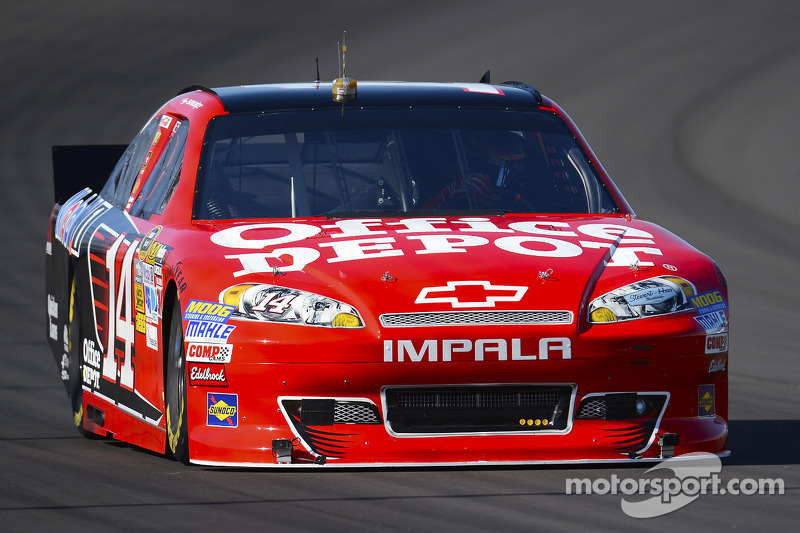 TONY STEWART, NO. 14 OFFICE DEPOT/MOBIL 1 CHEVROLET, met with members of the media at Watkins Glen International and discussed racing at Watkins Glen, racing sprint cars, his approach to the Chase this season and other topics. 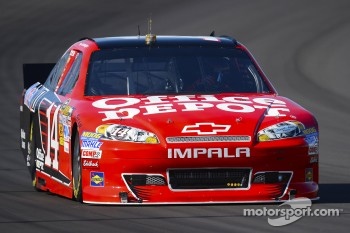 TALK A LITTLE BIT ABOUT COMING INTO WATKINS GLEN THIS WEEKEND: “It’s exciting obviously we have been pretty good here in the past so it’s a track that we definitely look forward to coming to. I’m not sure it really tells you where your program is but it’s a fun weekend. It’s nice to get away from the ovals for a week and come to a place like this. This track versus Sonoma is so much higher speeds that it’s got a lot of the same characteristics, but very different at the same time so it’s a lot of fun to do something different this week.”

WHEN JEFF GORDON WAS IN HERE EARLIER HE WAS ASKED IF THERE WAS ANY DIFFERENCE IN THE INFORMATION YOU GUYS (STEWART-HAAS) TRADE WITH HENDRICK WITH DARIAN (GRUBB) BEING GONE AND HIS LONG RELATIONSHIP WITH HENDRICK AND HE SAID THAT YOU GUYS AREN’T IN THE TUESDAY MEETINGS OVER AT HENDRICK AS OFTEN AS YOU WERE IN THE PAST BUT THAT YOU WERE STILL AN OPEN BOOK. HAVE YOU SEEN ANY DIFFERENCE IN THE AMOUNT OF INFORMATION YOU GET FROM THEM OR THAT YOU GIVE TO THEM? DO YOU NOT NEED TO GO TO THE MEETINGS BECAUSE YOU HAVE KIND OF BUILT YOUR PROGRAM UP? “It’s not that we don’t need to go it’s just that Darian (Grubb) had a unique relationship with Hendrick’s. That is kind of where we were invited into their meetings. The information still is an open book back and forth so we are still sharing the same amount of information. The only component that is different is we are not involved in that Tuesday meeting. The relationship is still really good from both sides. We feel like we are an asset to them and we definitely know that they have been an asset to us for sure. That side of it really hasn’t changed.”

NOBODY HAS WON MORE HERE THAN YOU IN NASCAR WHAT HAS BEEN THE KEY TO YOUR SUCCESS HERE OVER THE YEARS? “I would sound a lot smarter if I actually knew the answer to that question, but I really don’t know (laughs). Every one of the wins has been different and there is just something about the road course stuff that I like. We have ran really well at Sonoma too we just haven’t gotten as many wins. This is just a fun track. I think there are parts of the track that I know are important and that I know what I need the car to feel like on Saturday to be good on Sunday there. Every year is still a challenge because the technology changes every year so the set-up’s keep evolving and keep changing. That feel has to change also you can’t go back to that one particular feel and expect it to be perfect for every race. It constantly evolves, but it’s just been a track that has really been good to us. I’m not sure there is really one solid answer that covers it. Half of the battle is just liking the places that you are going to and this is a track that we like.”

WHAT SIMILARITIES DO YOU SEE IN TERMS OF THE POTENTIAL FOR THEM (THE NO. 24 TEAM) TO DO SOMETHING ALONG THE LINES OF WHAT YOU DID LAST YEAR IN THE CHASE IF THEY MAKE IT? “Well the first thing is they’ve got Jeff Gordon so as long as Jeff is in the equation it doesn’t matter who he is with you can’t count him out. The second thing is you’ve got an organization that knows how to win, knows how to win championships. Even when they get in, I don’t even know that I would call it a slump for them, because they never have really ever got in a slump. They have had clumps of bad races, but they never get in just an entire slump. You never can count those guys out. There is always that potential. Anytime those cars are in the Chase there is potential that they can win the championship. I wouldn’t count him out yet.”

RACING HAD ALWAYS KIND OF BEEN A SOUTHERN THING, UNLESS YOU’RE IN A PLACE LIKE WATKINS GLEN, CAN YOU TALK ABOUT THE EXPLOSION AND DIFFERENT TYPE OF PEOPLE WATCHING AND BEING FANS OF NASCAR? “Well the good thing is you are in the room that can get you caught up pretty quick on that. These guys know pretty much everything that has happened over the last 10 years. It’s evolved like everything else has. The TV packages have gotten better and better. You are seeing drivers not only come from all of the United States but you see guys like (Juan Pablo) Montoya and Marcos Ambrose that come from all over the world. The attention that has been brought to it, they have brought in a unique fan base of their own from different countries. Obviously, Danica brings a huge fan base from IndyCar racing plus the fact that she is a female. It’s a pretty cool time in NASCAR right now. I’ve gone to Australia a couple of years racing Sprint Cars and they just got SPEED over there so everybody was excited because they were going to be able to watch NASCAR live. That was the big buzz when I was over there. The growth of it has changed from a Southeastern regional sport to worldwide in a short amount of time. It’s something that is pretty cool to be a part of right now.”

YOU’VE BEEN DOING A LOT OF SPRINT CAR RACING IN THE NORTHEAST WHAT HAS THAT BEEN LIKE? WHAT DO YOU BRING OVER INTO YOUR CUP CAR FROM SPRINT CAR RACING? “I’ve just had a lot of fun with it. A lot of people went on vacation their last week, I went racing five nights in a row. That is just kind of what I’m into and my thing. I feel like the more time I spend in a race car the better it’s making me as a driver. Everybody kind of has that feeling that you’ve got to get away from it at some point and recharge your batteries, but that does recharge my batteries. I think there have been times when we are in the Cup car that there is things that not necessarily that you can adapt as far as how the cars drive; but scenarios that you get yourself in and how to handle them and how to get through them that we have to deal with every night in a sprint car too. I think they go back and forth. I think there are things we learn in the Cup car that we can transfer to the sprint car and vice versa. I’ve been happy running as much as I’ve been running. If we don’t get rained out here these next couple of weeks we are going to be right around 95 races at the end of the year that I’m going to run. It’s going to be a full schedule for sure but it’s a lot of fun. It’s one of the most fun years I’ve ever had in a race car.”

HOW EARLY IN THE SEASON DO YOU SET YOUR SPRINT CAR SCHEDULE? HOW MUCH SUPPORT STAFF DO YOU HAVE SO THAT WHEN YOU SHOW UP YOU ARE COMPETITIVE? HOW DO YOU GET THE SPONSORS ON BOARD? MANY OF YOUR SPRINT CAR SPONSORS ARE THE SAME AS YOUR CUP SPONSORS? “Actually it’s just something above and beyond that we do for our sponsors. They don’t finance the sprint car program. All those sponsors that we have we put them on the car just as a thank you and it’s kind of one of those things where we try to under promise and over deliver with them. A lot of them have throughout the year this year been able to go to a sprint car race and were really surprised that they had that kind of representation. We basically have three guys that go on the road with that team. A sprint car team really doesn’t need a big staff of people. We have Jimmy Carr who is our competition director for all of our open wheel teams and he has been my crew chief. We have two other guys that go along with that car. It’s not a huge crew. The biggest thing has just been the travel cost and the operating costs. Fuel prices are killing a lot of the open wheel teams going across the country right now. It doesn’t really take a lot of people to do it and we set the schedule clear back as soon as we got the schedules. The hard part is a lot of sanctioning bodies their schedules don’t come out until January or February. As soon as we get the schedules we try working them into our schedule and getting them in as early as possible.”

IN SPEAKING WITH GUYS LIKE KASEY KAHNE WHO GO PERIODICALLY RUN A WORLD OF OUTLAWS CAR WITH HIS OWN TEAM HE ALWAYS KNOWS HOW HARD IT IS TO GET UP TO SPEED AND HOW FAST THOSE GUYS ARE IN THEIR PARTICULAR DISCIPLINE. IT FRUSTRATES THE FIRE OUT OF HIM. YOU GO WIN! WOULD IT BE APPLICABLE TO COMPARE IT TO ONE OF THOSE GUYS COMING OVER HERE AND WINNING? WHAT IS THAT CHALLENGE LIKE FOR GUYS TYPICALLY? “I think the difference is, I mean Kasey (Kahne) has gotten to run a handful of them this year. I’ve run I think 40 races already this year with it so it’s a lot easier for me to adapt because I’m doing it so much. It is hard. That is probably the hardest two cars to try to go back and forth between because their handling characteristics and the physics of them. It doesn’t take Kasey as long as he likes to explain to you. He goes out and kicks butt with it too. It would take guys awhile to go from that type of car to here, just like it would take time for anybody that runs a Cup car to go over there and run those cars.”

LOOKING AT WHERE YOU WERE LAST YEAR AT THIS POINT FIGHTING TO GET INTO THE CHASE AND NOW YOU ARE ESSENTIALLY IN WITH THE THREE WINS THAT YOU HAVE. WHAT HAS THAT DONE MENTALITY WISE AS FAR AS THE FOCUS FOR EACH RACE GETTING TO THE CHASE; CAN YOU TALK A LITTLE BIT MORE ABOUT YOUR PREPARATION AND GETTING READY TO DEFEND YOUR CHAMPIONSHIP? “Well the preparation is the same. You still go week to week right now. I think it has changed our focus from trying to make sure we get in the Chase to trying to get our program more consistent and trying to figure out how we can do the same things we did in the Chase and work on that consistency. The wins are great if you can get five wins like that in the Chase that’s great, but it won’t do you any good if you follow it up with five 25th –place finishes, you won’t be able to get it done. We are just trying to close that gap between the good days and the bad days and make it more consistent and see if we can get the average a little better.”