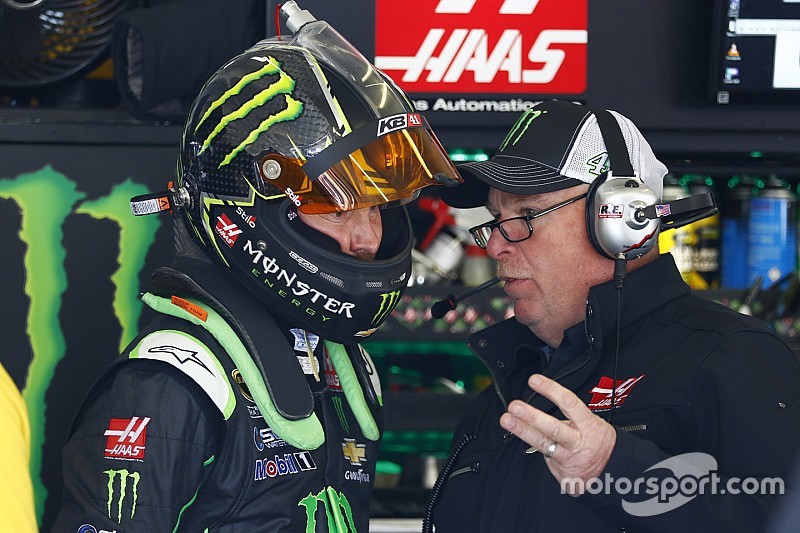 Crew chief Tony Gibson missed out on Kurt Busch’s first Sprint Cup Series victory of the season but to him there is nothing bittersweet about the win.

“Somebody asked me if it was bittersweet. Absolutely not. It was all sweet – it was all good. That’s what you want to see. We’ve been building this team a long time – since we were at Dale Earnhardt Inc. A lot of us were on the No. 8 car,” Gibson told Motorsport.com.

“Johnny has been with me a very, very long time along with some other guys. You want to see these guys progress and you want to see them in the crew chief role, or whatever they want to be next, and see them move on and be successful.

“For me it was like, ‘You did your job.’ We put a good group of guys together; we trained them well; they work great together; they’ve all grown together. To watch them go out and achieve and take a plan and execute it fully – I couldn’t be more proud of these guys.”

Winning without Gibson shows No. 41's strength and depth

“It shows the amount of quality effort that Stewart-Haas Racing is putting forth in building cars, but also in building people,” he said. “And that’s what I was very proud of last week – to be able to win with an interim crew chief.”

Busch had been in contention for the win in several races this season, most notably Atlanta, Las Vegas and Bristol but had been unable to put it all together to reach Victory Lane.

Even though they have shown speed, without a win, Gibson had said previously the No. 41 had been “flying under the radar.”

“This year we’ve been running top-five and top-10 every week and have been in position but there’s three or four races we didn’t capitalize on – we failed,” Gibson said. “Then you start doubting yourself and asking, ‘Can we win?’

“We knew our team was capable, we knew the runs were there. Pretty soon, it was all I could do to keep the morale up. It’s my job to keep the guys pumped up and keep them excited that we have a great race team.

“You want to fly under the radar. You want to be the team that makes it through all the rounds of the playoffs and the next thing you know they’re in the Super Bowl. And everyone is like, ‘Where did this team come from?’ That’s been our motto since Day 1.”

Gibson said Busch has been instrumental in keeping the morale strong on the No. 41 this season. In fact, Busch went to the SHR shop last Tuesday morning before Pocono race and worked out with the team.

“I think for Kurt, the relief of being in the Chase, he has that win now, I think that lifted a lot of weight off his shoulders,” Gibson said. “If things don’t go right one race, you can make it up again next week.

“Kurt has been the biggest motivator of any of us, keeping the guys excited and pumped up and saying, ‘We’re going to get it. We’re right there. There are a few things to work on to make it all happen but our day will come.’ And it did.”