Title contender Truex is used to beating the odds 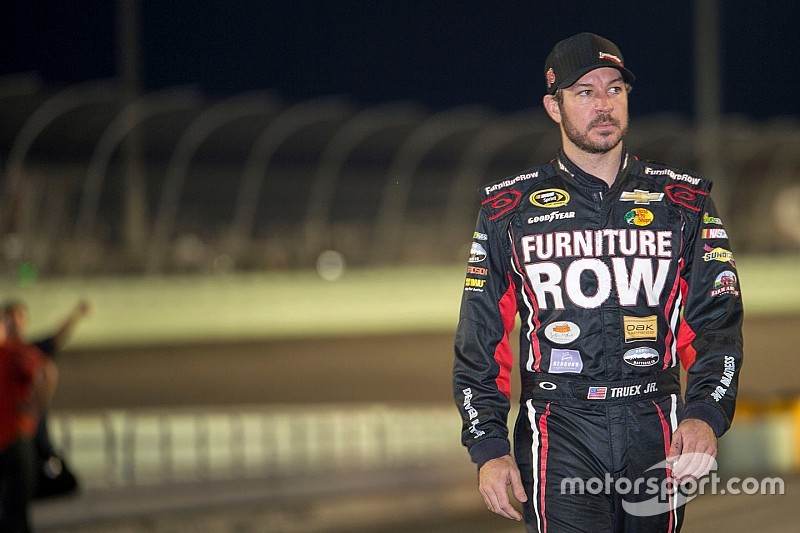 Call them underdogs. Call them the little team that could.

But after qualifying for two Chase for the Sprint Cup berths in the last three years, "contender" is the name that best suits Denver, Colo.-based Furniture Row Racing.

Unprecedented season for both driver and team

And on Sunday, regardless of where Martin Truex Jr. finishes in the Ford EcoBoost 400, the Barney Visser-owned team will have its best finish in the standings in the 10-year history of the team.

I've been through a lot of crap in my life

Truex will post a career-best finish in the standings as well. In nine previous full seasons on the Cup tour, Truex has finished 11th twice. This year he is guaranteed a career-best fourth-place points finish at the very least.

“We want this more than anything right now,” Truex said. “It's all or nothing. I mean, this is the only thing that matters. I don't know if, based on past history, just the things that I've been through, you never know when you're going to get on opportunity like this again.”

Truex has overcome both professional and personal adversity

At 35, Truex has endured his share of adversity on and off the track. After winning the XFINITY title twice for Dale Earnhardt, Inc., Truex went through a transition when the company was absorbed by Ganassi Racing in 2009.

One year later, he was recruited by Michael Waltrip Racing. Initially, Truex did not acclimate well to MWR, but midway through his second season, Chad Johnston took over as crew chief of the No. 56 NAPA team and provided the driver the stability he’d been missing. In 2012, the pair’s first season together, Truex returned to the playoffs for the first time in five years. One year later, Truex won at Sonoma — his first trip to Victory Lane since 2007 at DEI.

It's been pretty remarkable the way she's went through everything, really inspiring to me. There's so many things I could say about it, but in the end there's three to go and she's a fighter.

Martin Truex Jr. on girlfriend Sherry Pollex and her battle with cancer

The prosperity didn’t last. Clint Bowyer’s spin at Richmond in the final regular-season race of 2013 would alter the course of MWR forever. Truex was bounced from the Chase by a points penalty, and sponsor NAPA dropped its support. Once again, Truex was looking for a ride.

He found a home at Furniture Row Racing. Kurt Busch raced the No. 78 Chevy into the Chase for the Sprint Cup in 2013, the first time a single car team — let alone one outside of North Carolina — had qualified for the playoffs since the program's inception in 2004. But when Busch was recruited to Stewart-Haas Racing by owner Gene Haas, the ride opened for Truex.

Again, it was a slow transition for Truex at FRR. His long-time girlfriend, Sherry Pollex, continued to offer her support until the tables turned. Pollex was diagnosed with Stage 3 ovarian cancer last August. Suddenly, Truex's struggles on the racetrack became secondary.

“I've been through a lot of crap in my life,” Truex said. “Honestly, been a lot of ups and downs in my whole career. The things that happened last year with Sherry getting diagnosed with cancer, the foundation we have, the kids we met, just have a different perspective on things.

“Racing is important, it's a big part of my life, but it's not the only thing that matters. I know each and every weekend, each week getting prepared for the race, I give it my all, and that's all I can do.

“There's a lot of things in this sport you can't control. I've learned not to worry about those, not let those bad weekends that happened to me that I can't do anything about bother me and make me lose sleep over.”

Truex’s statistics in 2014 mirrored his rookie results. He posted just one top-five finish, led a single lap and finished a career-low 24th in the point standings.

The organization switched crew chiefs in the off-season and promoted former team engineer Cole Pearn to oversee the No. 78 Chevy. Pearn knew the obstacles his driver faced on and off the track and strived to provide Truex a better comfort zone. The team kicked off the new year with seven consecutive top 10s and won the June race at Pocono. He posted five top fives and 14 top 10s in the first 15 races of the year.

“I think that perspective of having to get up every day and make the most of it has definitely been the change you've seen in him, or even if we do have a bad day or whatever, he keeps the big picture in mind and keeps everybody positive most of the time, and that's been a huge pleasure to have around and really been a positive thing for our team,” Pearn said.

“The relationship between me and him, it's just easy. We're very focused people but we're very relaxed in the same sense, and having to work together with somebody like that just makes it really simple.”

As Truex battled on the track, earning a career-best eight top fives and 22 top-10 finishes, Pollex continued her own fight. After backing Truex throughout the first 35 races and watching him transfer into the final four for the Champion’s Round after Phoenix, she returned home to North Carolina to continue her chemo treatments.

“She's been great,” Truex said. “Three to go. Three more treatments and she'll be done. Hopefully that's the last she'll ever have to see of it, of that place.

“It's been pretty remarkable the way she's went through everything, really inspiring to me. There's so many things I could say about it, but in the end there's three to go and she's a fighter. I'm glad that she's as strong as she is.”

On Sunday, Truex will have to come out fighting as he competes against defending champion Kevin Harvick, four-time champion Jeff Gordon and Kyle Busch for the title.

“All we can do is make the most of it, put our best effort out there,” Truex said. “The guys have worked hard. They feel confident about what we're going to have this weekend. It's a huge deal and you never know, like I said. May never get this opportunity again.

“That's how big of a deal it is for me. But at the same time what can you do different. You got to go out there and you got to stay focused and do your thing, do what we've been doing all year long. Hopefully, we can step that performance up and be able to win the race.

“But I'm just really excited to be a part of this, to be given this opportunity, have a great team behind me. Hopefully we can make it happen. There's no guarantees. It's going to be difficult. It's going to be tough. But I'm telling you, we want it as bad as anyone out there. It's ours to go get.”

Fifth title or not, Jeff Gordon leaves NASCAR a champion