The biggest surprises of the 2014 NASCAR season so far

Nine of the first 26 regular-season races have been run, and Stewart-Haas Racing and Team Penske have recorded three victories each.

After Saturday night’s knock-down, drag-out war at Richmond International Raceway, the first third of the NASCAR Sprint Cup Series season is over.

Nine of the first 26 regular-season races have been run, and Stewart-Haas Racing and Team Penske have recorded three victories each.

In and of themselves, those results could be considered surprising. Given the personnel changes at Stewart-Haas, from drivers and crew chiefs on down, a .333 winning percentage for the organization is laudable.

And with drivers Brad Keselowski and Joey Logano hitting on all cylinders, Penske’s two-car team has been equally impressive in mounting a serious challenge to Roush Fenway Racing, the long-time uncontested leader of the Ford camp.

But those aren’t the most surprising results of the season so far. Here are my nominees for that distinction: 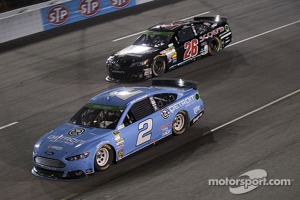 1. Jimmie Johnson is winless through the first nine races. With the premium on victories ratcheted up dramatically under NASCAR’s new Chase for the Sprint Cup qualifying format, you might have thought Johnson and crew chief Chad Knaus—two of NASCAR’s perennials in Victory Lane—would have salted away a win in the first few races.

That hasn’t been the case. Instead, Johnson has struggled, and with tire trouble and a 32nd-place finish Saturday night at Richmond, the six-time champion is eighth in the series standings, 59 points behind leader Jeff Gordon and not remotely close to clinching a Chase spot.

Conventional wisdom has it that Johnson will win a race sooner or later. After all, in 12 full seasons of Cup racing, he’s never gone more than 11 races to start a season without taking a checkered flag. Johnson says he’s not worried and that he expects the formula that has carried him to 66 victories and six titles to work just as well under the current format.

But if the No. 48 team leaves the June 1 race at Dover—arguably Johnson’s best track--still winless through the first half of the regular season, it might well be time for concern.

2. Matt Kenseth is winless through the first nine races. In his first season at Joe Gibbs Racing last year, Kenseth won a series-best seven events, combining with Johnson to capture 13 of the 36 Sprint Cup points races.

Kenseth has had his moments this year. Until he and Brad Keselowski decided to rough each other up after the final restart at Richmond, Kenseth appeared the likely winner. Instead, he fell to fifth in the late scrum.

As an organization, Joe Gibbs Racing hasn’t found the key to the new competition package NASCAR introduced this year. Kyle Busch has the lone win for the company, and that came at Fontana, Calif., amid a spate of tire troubles for other teams.

Kenseth, at least, has a solid season going, if not a winning one. He’s second in the standings, five points behind Gordon and, unlike Johnson, in position for a possible Chase spot based on points, even if he doesn’t win a race.

3. Chase Elliott. OK, the scion of Awesome Bill isn’t a Sprint Cup driver (yet), but his progress this year has been nothing short of remarkable. Elliott won NASCAR Nationwide Series races in back-to-back maiden voyages at Texas and Darlington and darn near made it three in a row at Richmond, where he finished second to Kevin Harvick.

Elliott leads the NNS standings, and it’s not far-fetched at all to think he might win the series championship in his rookie season. If that happens, it will be hard to keep Elliott out of the Cup series next year, especially in light of the success NSCS rookie Kyle Larson has been having with Chip Ganassi Racing this season.

If Elliott is deemed ready, team owner Rick Hendrick, who works hand-in-glove with the Nationwide Series entries at JR Motorsports, may have a problem. Currently, there’s “no room at the inn” at Hendrick Motorsports, as Hendrick has been known to put it.

However, Hendrick also has been known to find room within his organization where none has existed, whether by ousting Kyle Busch in favor of Dale Earnhardt Jr. or by signing Kasey Kahne early and parking him elsewhere until a seat opened.

Whatever the case, Hendrick isn’t about to let a talent of Elliott’s magnitude get away.

Should Marcos Ambrose be penalized for punching Mears?