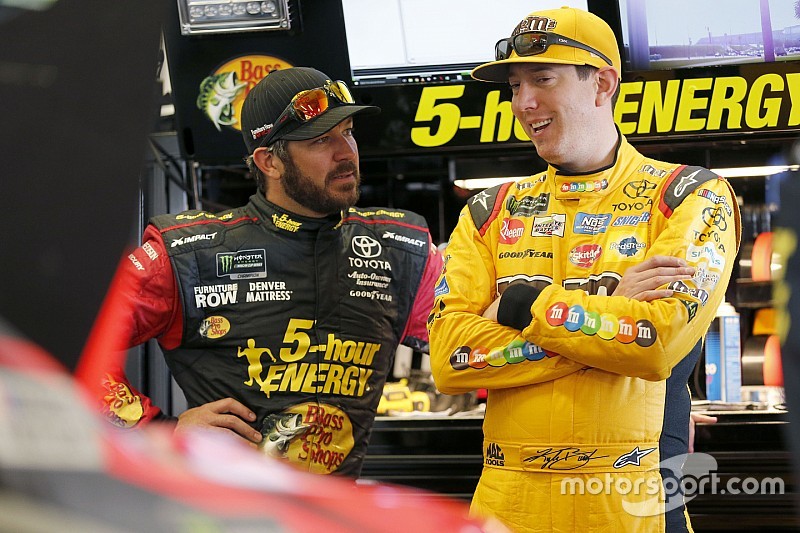 It’s been said a team has to be perfect this season in the NASCAR Cup Series to beat one of the “Big 3,” but it also appears they need to be perfect to beat each other.

While Harvick clearly seemed to have the dominant car, Busch and Truex both had chances to capitalize, but both had to overcome various issues which allowed Harvick to sweep all seven available playoff points in the race.

“It’s like a heavyweight battle,” said NBC Sports analyst Steve Letarte. “Whatever one can do, the other can do better. They continue to up the ante week in and week out.”

Added fellow analyst Jeff Burton: “They are bringing each other to a higher and higher level almost every single week.”

Multitude of issues for the No. 78 team

Truex had the most difficulties of the three on Sunday.

In Stage 1, rookie William Byron ran up the track and into Truex’s No. 78 Toyota, which sent both cars spinning. Truex lost track position but received little damage in the incident.

With one lap remaining in Stage 2, Truex’s Toyota ran out of fuel as they team tried to stretch it to the conclusion of the 60-lap segment. Not only did he lose track position by having to pit under green, he also incurred a penalty for pitting while pit road was closed.

He ended up falling a lap down but eventually was able to return to the lead lap in the final stage thanks to a caution. He ended up salvaging a 14th-place finish.

“We had a rough day for sure, everything that could go wrong, did. We got wrecked early by a rookie mistake underneath us and then ran out of gas – could have won the second stage, we just ran out of gas,” Truex said.

“The Camry was fast and we just couldn’t catch a break. We kept losing track position and then we got a lap down. We never could get on the right end of things. We had a good car and that was cool because we worked hard on it and we learned a lot this weekend.”

"You better be right on to win these races"

Busch’s issues in the race had more to do with being in the wrong position on the track during restarts and feeling his No. 18 Toyota needed to be just a little bit better to compete with Harvick.

“You better be right on to win these races these days with the guys that are winning and being able to execute at the end of the day,” said Busch, who led 22 laps and finished third. “Our Interstate Batteries Camry was pretty close, but certainly wish we had just a tick more.

“Overall, good day for us – it’s Michigan and we don’t count on much when we come to Michigan. The restarts were the name of the game here and we were kind of on the bottom (lane) there the last couple of them and got shuffled back and wasn’t able to pass once everybody got strung out.

“Air was the reason why everybody got strung out and once everybody did that, you couldn’t make up any time on anybody at that point. Best chance we had to pass guys was just on strategy there at the end and on pit road.

“The car was good and we got the most out of our day."

Austin Dillon enjoys his best run since winning the Daytona 500