Ryan Pemberton recently joined Tommy Baldwin racing to serve as crew chief on the No. 36 Chevrolet team and work with driver Dave Blaney in the NASCAR Sprint Cup Series in 2012.

"I'm thrilled to join Tommy Baldwin Racing," Pemberton said. "TBR has shown a lot of growth in a short time, and I'm looking forward to the challenge of stepping up the program this year. Tommy, Dave and I all come from families of racing and have similar backgrounds, so I think it will be a good fit."

Hiring Ryan is another stepping stone for TBR,.

Last season was the first season TBR, formed in 2009, fielded at least one car in every Sprint Cup Series event. So far, the highest race finish for the No. 36 team is a third, scored by Blaney at Talladega Superspeedway in October.

Pemberton was the crew chief on the No. 83 Red Bull Racing Toyota team with driver Brian Vickers in 2011. Red Bull Racing closed the doors on its NASCAR efforts at the end of last season.

Overall, Pemberton's statistics as a crew chief include two race wins, 21 top-fives and 92 top-10 finishes. He has worked with drivers including Mark Martin, Joe Nemechek, Scott Speed and David Reutimann, who also joins TBR for 2012 to share driving duties on the No. 10 Chevrolet team with Danica Patrick. 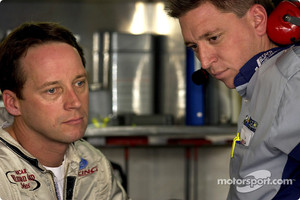 Hiring Ryan is another stepping stone for TBR," car owner Tommy Baldwin said. "Ryan brings experience and a wealth of knowledge from all the years he has been in the sport. He has been successful with every team he has worked for, and we are excited to have him be a part of our program."

A complete schedule for the No. 36 team has not been set, as TBR is still working on finding sponsors. The organization's goal is to secure enough sponsor backing for the No. 36 to compete in all 36 races on the 2012 schedule.

The Nemecheks are holding their own in modern NASCAR